A Girl and Her Pig: Smoked Trout w/ Potato Salad 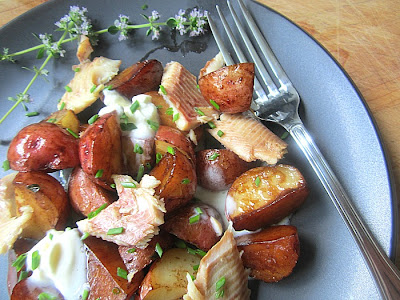 I love smoked fish, it's in the genes.

Recently, there was an article on using spring trout in New York Magazine and April Bloomfield's recipe for potato salad w/ smoked trout called out my name. 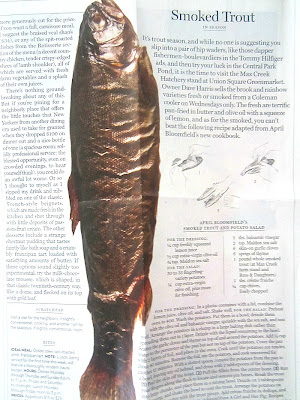 It is from her book "A Girl and Her Pig". Bloomfield is the chef/owner of the Breslin in NYC, formally of the fabulous Spotted Pig.

Her recipe is oddly written, and she makes a major production about roasting her potatoes.
Read on.

I decided not to be argumentative (now there's something new) and do it her way.
I would add the "perimeter" of water at the bottom of the pan, and cover with 2 layers of foil (why?).

Ms. Bloomfield wants you to use spring fingerling whole potatoes, but since I am not growing any in our garden (maybe next year), I opted for my always dependable, little red new potatoes, but I quartered them instead of leaving them whole. Not sure if this mattered, but this was probably the best potato salad I have ever had.

I also did not go to Russ & Daughters on the Lower East Side as the article suggested, for my whole smoked trout, but bought it in a can, and it was just delicious. 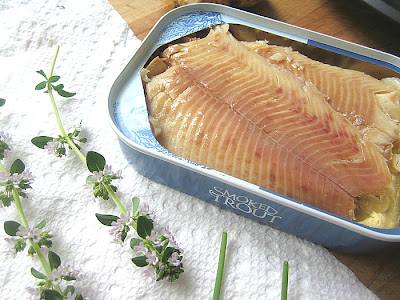 Perfect served with a whole chicken on the grill. 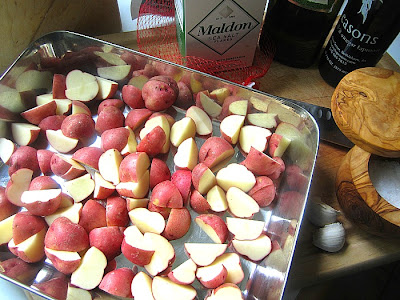 For the dressing: In a plastic container with a lid, combine the lemon juice, olive oil, and salt. Shake well.

For the salad: Preheat oven to 400F. Wash the potatoes (leave them whole if using fingerlings). Put them in a bowl, drizzle them with the olive oil and balsamic vinegar, sprinkle with the sea salt, and toss well.

Arrange the potatoes in a clump in a large baking dish rather than spreading them out in 1 layer. Drizzle with the liquid remaining in the bowl. Scatter the garlic cloves and thyme on top of and around the potatoes.

Ok, here's the weird part: Add 1/2 cup water to the perimeter of the pan but not on top of the potatoes. Cover the pan with 2 layers of foil, and place in the oven.

Cook until the potatoes are tender, about 40 minutes. Remove the foil, stir the potatoes, and cook uncovered for another 15 minutes.

With a slotted spoon, remove the potatoes from the pan to a bowl, leaving any oil behind, and dress with 2 tablespoons of the dressing. 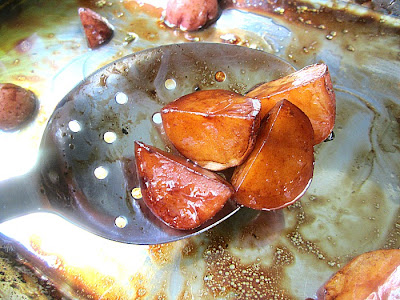 She doesn't say what to do with the beautiful little roasted cloves of garlic, so I decided to smear them on some toast and call it a day.

If using a whole smoked trout: (1) Peel the skin off the trout. (2) Pull the fillets from the center bone. (3) Run your fingers along the flesh to locate and remove pin bones. Break the trout into large chunks, and place them in a mixing bowl. Drizzle on 2 tablespoons of dressing, and shake the bowl to coat the trout.

Arrange the potatoes on 4 plates, and scatter with the trout pieces. Add crème fraîche in dollops, and sprinkle on the chives. 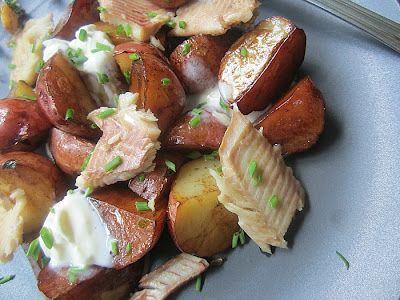 This is the perfect salad for any season and we loved it.

*note: I've made this salad twice so far. The second time I just boiled the red potatoes like I would for my classic potato salad. I mixed the smoked trout in with onions, creme fraiche and other good stuff and it was just as good as this complicated version!

Christine said…
When I saw the tin of smoked trout, I wondered if it was TJ's. I have some creme fraiche in the works on top of the fridge which will be ready tomorrow, so I'll be making this after a quick run to TJ's. Yum!
July 19, 2012 at 11:10 PM