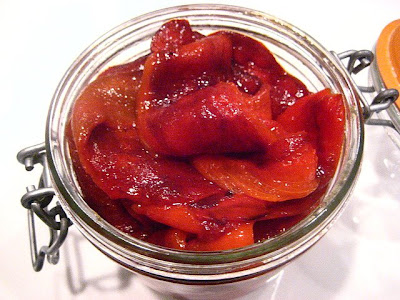 Red peppers are the best, and roasting them brings out their sweetness.

They are great tossed in with salads, on sandwiches, served with fresh mozzarella, or just eaten plain. 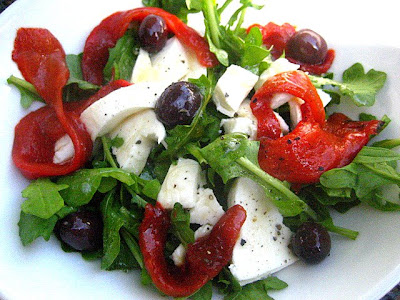 It's fine to buy the stuff in the jar, but I find there is some kind of weird aftertaste, like a citric acid or vinegary flavor. I can always tell if a restaurant is using canned or jarred roasted peppers, or making their own.

It's so easy to roast peppers at home and you'll like them better than the already made stuff.

Red peppers were on sale this week for $1.49 a lb. (I have never seen that here in NJ for such a great price, except in Sept. at the end of the summer season), so I grabbed a big bunch.

Here is my method, and the easiest method to roast peppers.

How to Roast Peppers for Dummies:

With a sharp knife, cut your bell peppers into quarters, by standing them up and cutting in a downward motion.

You should have 4 quarters, and the ribs and seeds should be discarded.

Now lay your peppers skin side up on a baking sheet lined with aluminum foil. 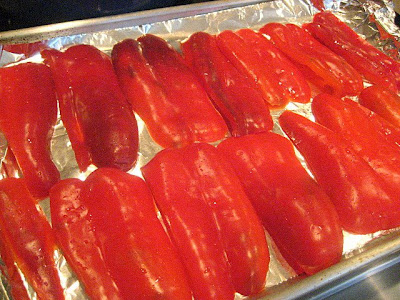 Preheat your oven to BROIL. Gas or electric works fine. Place peppers in the oven and broil about 15 minutes.

Keep an eye on your peppers so that they don't burn. Check on them, but open the oven carefully, because the steam will hit you in the face hard. Been there, done that.

You will smell when they are almost ready. Remove baking sheet from oven and FOLD the aluminum foil into a package, enclosing the peppers. This process will steam them. 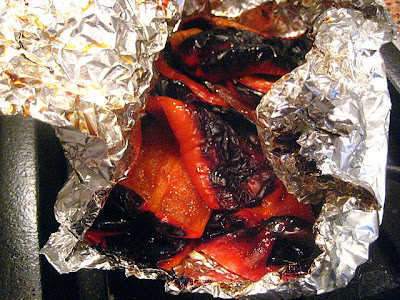 Leave this foil package on the counter for about 20 minutes, until peppers are cool enough to handle. The skins will slip off the peppers easily.

Store them in a covered container or jar. No need to put any oil in with them, they will make their own oil.
Keeps in the fridge for a week to 10 days. 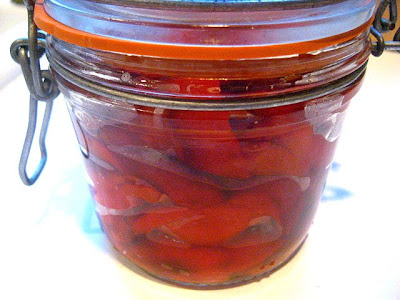 Maris said…
I love roasted red peppers in salads or sandwiches. Interesting that they produce their own oil - I wonder how they do that!
March 20, 2009 at 7:29 AM

Christo Gonzales said…
cool technique but best of all - these are you best looking photos to date - whatever lighting thing you did, keep on doing it...these are beauties...
March 20, 2009 at 8:14 AM

Peter M said…
Easiest? We have to have a contest. By the time you're done quartering the peppers, my whole roasted peppers will have been blackened, charred on a gas or charcoal grill.

Sara said…
That salad looks delicious - I often roast up a large batch of peppers and then freeze them in smaller portions - they freeze quite nicely.
March 20, 2009 at 9:19 AM

Anonymous said…
Wow that's great!! I'm def gonna have to try it! Thanks for the info!

Patsyk said…
Thanks for sharing those tips! I love roasted red peppers, but usually just buy a jar of them. I'm sure they are so much better when made at home.
March 20, 2009 at 10:10 AM

~m said…
hi, stacey! i'm a faithful (if often silent) reader, but i had to point this out:

"you should have 4 quarters"

LaDue & Crew said…
Yum- so simple to make, and the greatest flavor.

Anonymous said…
I've always roasted my peppers under the broiler. And then transferred them to a covered bowl to steam. I have never thought about doing it on a sheet of foil and then wrapping the foil into a pocket. What a great way to eliminate a step.
March 20, 2009 at 1:47 PM

Anonymous said…
I love roasted peppers and they look wonderful in your lovely salad! Yum!
March 20, 2009 at 1:51 PM

Anonymous said…
I roast peppers almost every night. They are seriously my favorite. I can never even save any becuase I eat them all!
March 20, 2009 at 5:07 PM

Proud Italian Cook said…
I agree the flavor dosen't even compare to the stuff you buy. These wouldn't last a week to 10 days in my frig! I agree about the lighting in the last photo...Georgeous!!
March 20, 2009 at 10:28 PM

Anonymous said…
This comment has been removed by a blog administrator.
October 3, 2009 at 6:12 AM