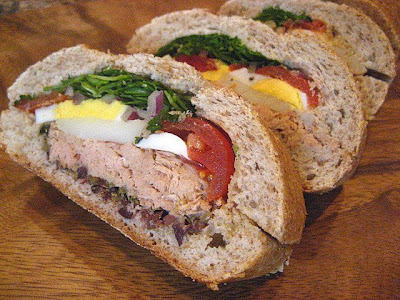 This should be called PAIN bagnat instead of pan bagnat (because it was a bit of a pain to make!).

The word "pan bagnat" means "wet bread" in French and this sandwich is just that!
Like a panzanella salad (bread salad) from Italy, where you moisten the bread with oil and vinegar to soften.

This sandwich originated in Nice, France and is basically a Nicoise Salad in a loaf (minus the green beans). Next time I will stick with my Salade Nicoise, much easier to prepare.

This was a chore to make, but worth the effort. There are a lot of ingredients involved and then you layer them in a hollowed out loaf of bread and weigh it down overnight with weights. You following me?

I saw a great looking photo (never browse for recipes on line when you are hungry) on tastespotting, the recipe originated from the L.A. Times.
I love the combination of ingredients and the photo was so pretty, so I decided to make one. 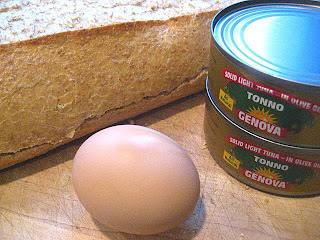 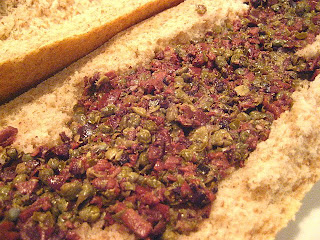 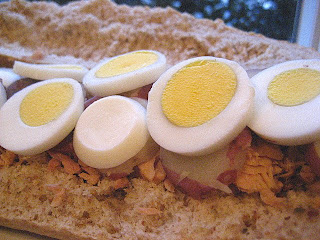 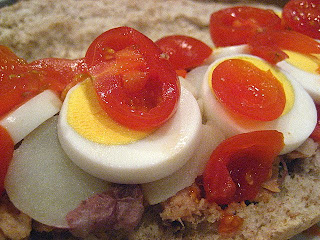 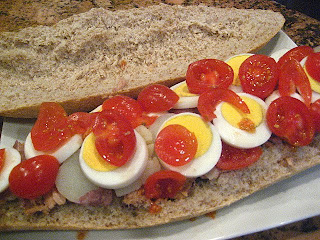 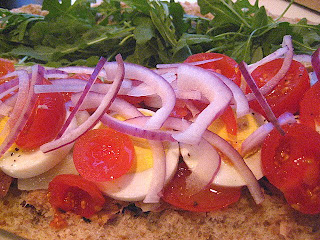 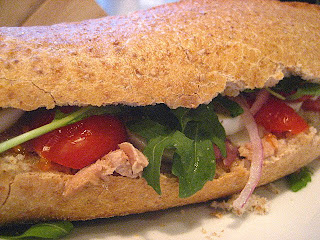 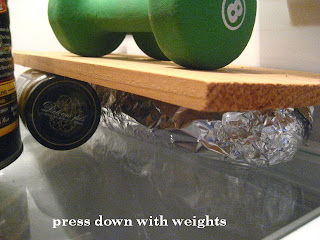 1. Halve the baguette lengthwise and scoop out a little of the interior of both sides with your fingers.

2. In a small bowl, whisk the vinegar, lemon juice, salt and pepper until combined. Whisk in the olive oil until emulsified and set aside.

3. Coarsely chop the olives and capers, then combine in a small bowl with the minced garlic and set aside.

4. Fill the bottom part of the baguette with the olive mixture, spreading it evenly across the hollowed-out baguette. Layer the tuna over the olives, then, in even layers, add the potatoes, eggs and tomatoes. Drizzle the vinaigrette over the sandwich, then add the onions and the arugula, pressing down on the contents as you go. Top with the other baguette half and wrap the sandwich tightly with plastic. Refrigerate overnight, weighted with a cutting board or a plate topped with some cans or bottles.

5. The next day, take the sandwich out of the refrigerator in the morning and cut into sixths. Wrap individually and pack for lunch: the sandwiches are best when they've been sitting at room temperature for a couple of hours. 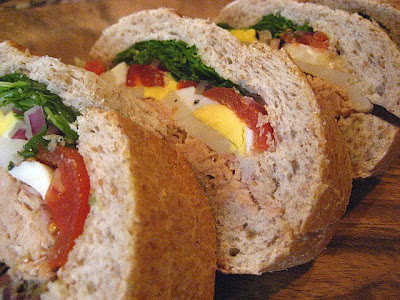 Anonymous said…
You need good strong teeth to bite into that beauty.

thepassionatecook said…
oh i love pan bagnat (which is actually a provencal word, not a mis-spelling) - and the tuna nicoise version is very appealing! not craving summery food, as it's freezing here at the moment... but that's one to try soon!
January 21, 2009 at 8:46 AM

Ciao Chow Linda said…
You managed to bring summer into my cold environment. Thanks for the great idea.
January 21, 2009 at 9:32 AM

Mila said…
Stacy that is such a beautiful sandwich! I used to make the Italian version of that for picnics and bbq because it had no mayo and was picnic friendly.
January 21, 2009 at 9:50 AM

Jersey Girl Cooks said…
I love all these ingredients but it is a lot of work. Maybe I can get my local Italian deli top make me one.Looks like great bread too.
January 21, 2009 at 12:20 PM

Pierre 'Pepper' Lamielle said…
That is a particularly handsome looking Pan Bagna (it's a little closer to 'bathing bread').
This sandwich is great for shoving in a backpack and taking on a hike or sitting on top of while you are river rafting.
We take them on the long leisurely floats down the river in Calgary. The only problem is waiting half an hour before you swim.
January 21, 2009 at 12:33 PM

Karen said…
Looks delish! You reminded me of my recipe for a stuffed italian sandwich, similar to this. Now I'm going to have to make it! LOL
January 21, 2009 at 2:04 PM

Anonymous said…
I think the reason why it's "Pan" instead of "pain" is because it's the word for bread in provencal (langue d'Oc), same for "bagnat", actually.

You crack me up saying that was a pain, because it looks pretty amazing. I wonder what the pickled eggs would taste like in that sandwich? I have been making these non stop, everybody in my family loves them. Thanks for sharing!!
January 21, 2009 at 5:14 PM

Anonymous said…
I've had this sandwich once. It was marvelous! Your version looks even more delicious.
January 22, 2009 at 9:27 PM

Keithgarrick said…
That is a great pan bagnat. Me and my wife are soccer parents and we always end up being at the field for several hours. We tend to eat fast food, and other vending machine junk. This seems like a perfect sandwich to do the morning of and pack in a cooler with some other goodies. Thanks for the idea.
May 4, 2009 at 11:09 AM

Anonymous said…
This comment has been removed by a blog administrator.
October 3, 2009 at 5:57 AM

Anonymous said…
So cute that you thought this was a pain back in 2009, and now you make more complicated items - your culinary repertoire has definitely expanded!
Rebecca
July 27, 2015 at 12:19 PM