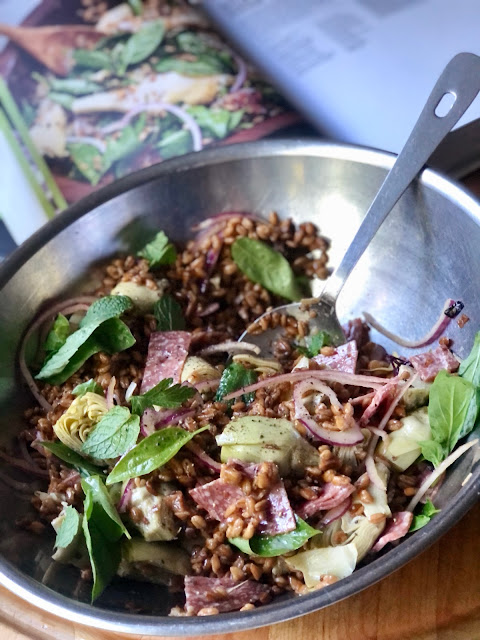 Joshua McFadden's book Six Seasons: A New Way with Vegetables calls this recipe a "Man Snack", maybe because it has salami in it?
I would call this an antipasto salad.
I was craving this after reading the recipe.
And Joshua has a great method to toast farro.  I will prepare my farro this way from now on.
This was a nice side dish to go with chicken parm....(also "man food" I guess).

I think how this dish turns out will depend on the artichokes you use, as well as the salami.    I used Genoa salami, and bland artichokes from a jar.   I think the next time I will use Trader Joe's grilled artichokes in the jar, which are better, and a Finocchiona salami (with fennel).
I toasted the farro in the morning, and laid it out on a baking sheet to cool.  Then right before dinner, I just tossed it with the sliced salami and artichokes, a simple vinaigrette, fresh basil and mint and lots of nice toasted homemade breadcrumbs.
The next day for lunch, I omitted the crumbs and tossed it with fresh arugula.
This is good stuff.  You don't have to measure exactly, the kind of recipe I like.
Here's how:
1 cup toasted farro (method below)
1/2 stick of salami, sliced or cut into chunks
1 jar of artichokes (you can use marinated artichokes too, just drain them)
1/2 red onion, sliced thin
fresh basil and mint
sea salt & pepper
Dressing:
2 tbsp red wine vinegar
3 tbsp olive oil
dried chile flakes
Toasted Breadcrumbs:
stale bread torn
grated garlic clove (on a microplane)
olive oil
Cook the torn bread with the garlic and oil in a skillet until golden, about 3 minutes. Watch that it doesn't burn.
Set bread crumbs aside (I add fresh parsley and oregano to mine if I have them).  Extra breadcrumbs will stay in the freezer for months.  Good to have on hand. 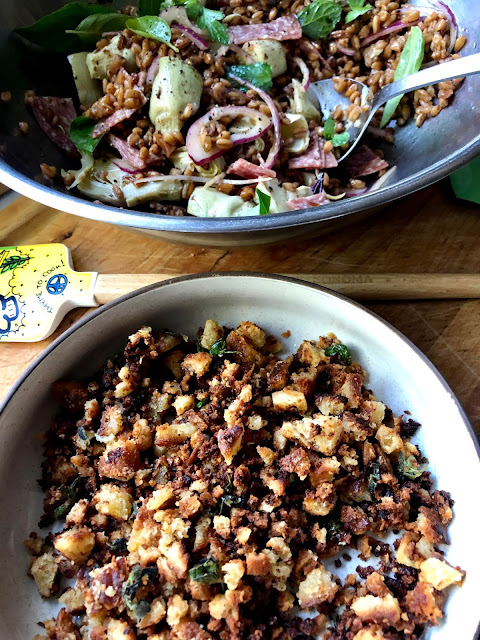 How to toast farro:
Place 2 peeled whole garlic cloves in a deep pot with a glug of olive oil and a pinch of hot pepper flakes. (I like saying "glug" of olive oil....very English). 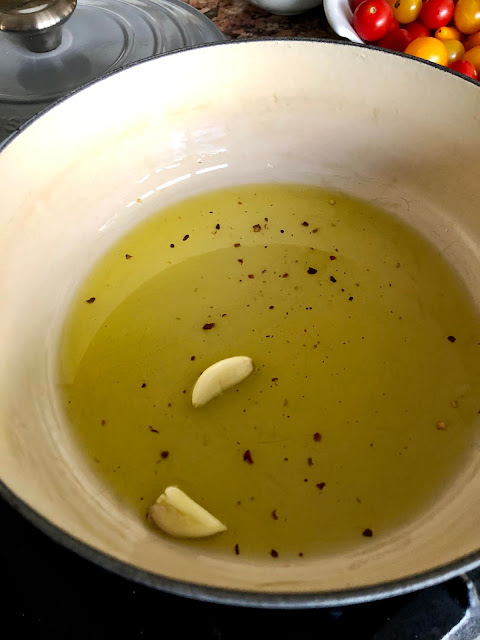 Toast the cup of farro with the garlic and oil for about 5 minutes, until fragrant. 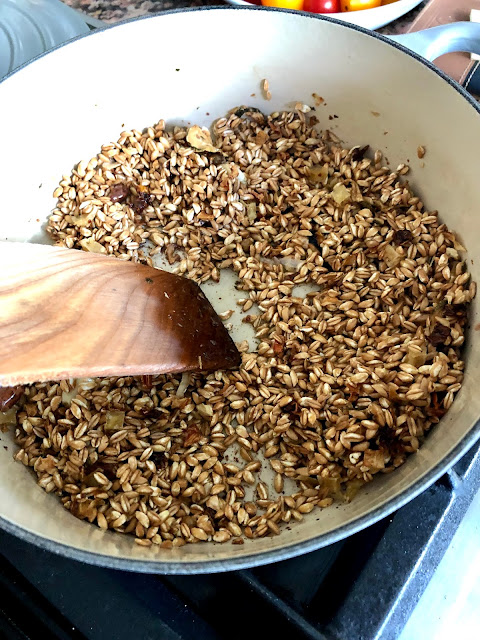 Add in 4 cups of water and a bay leaf to the pan.   Bring to a boil, then turn down to simmer about 30 minutes, until most of the liquid is gone and the farro is still toothsome (mine took 30 minutes).  You can drain out any excess liquid.
Transfer the farro to a baking sheet to cool and keep for assembling the salad later.
(Cooked farro also freezes well, so you have it on hand for other salads). 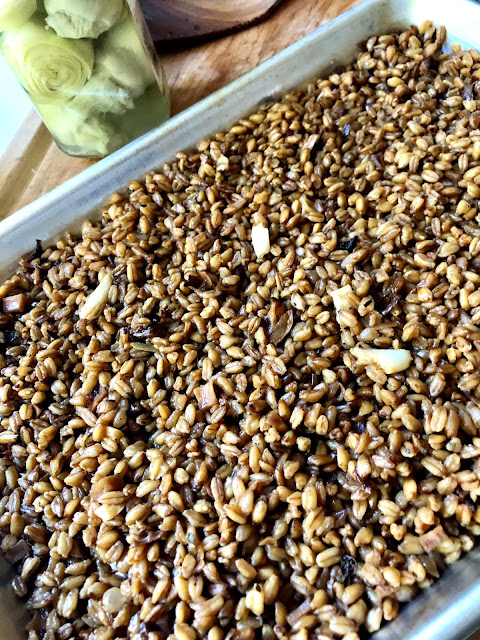 Now you are ready to assemble the salad.
Add the farro to a large bowl and toss w/ the vinaigrette.  Add in the rest of the ingredients and taste for seasoning.  This is a dish that needs salt and pepper for sure, so don't under season.
Toss in the fresh herbs and top with the breadcrumbs.
Sounds complicated, but it's just a simple antipasto salad.
I think good olives or parmesan cheese would be a nice welcome here too.  Cherry tomatoes were great in this the second day. 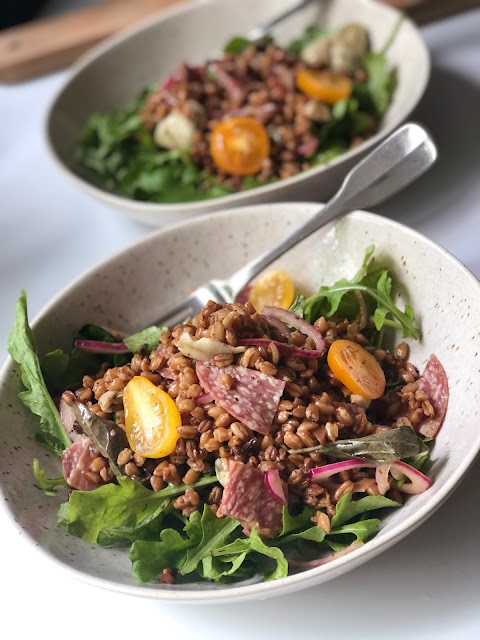