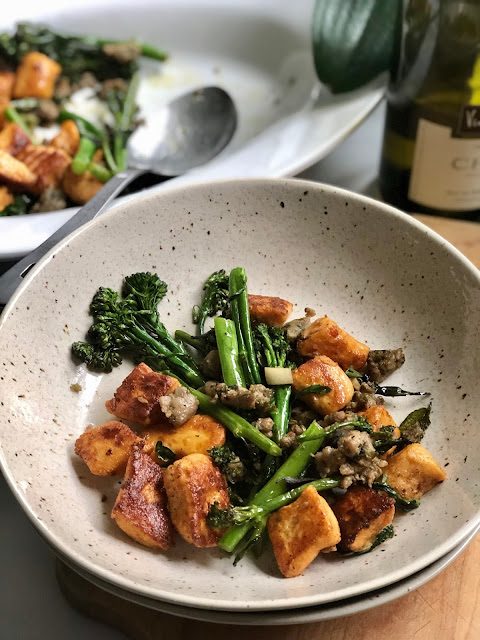 I am new to the gnocchi game.

I never liked them much, always too heavy, not really a pasta at all.

They are just little pillowy dumplings! Made with either potato or ricotta, or BOTH!

I am a new believer....they can be soft and light and so simple to make.

Since "quarantine cooking" has become a thing, I have been learning new recipes and using less ingredients, honing in on my culinary skills.

I had very good luck making regular potato gnocchi......so I thought it was time to advance my skills.

Let's start out by making simple potato gnocchi first: (I watched my friend Amy Currie make these on instagram stories, and thought, hey! I can do that! Took all of 15 minutes, not including the baked potato). 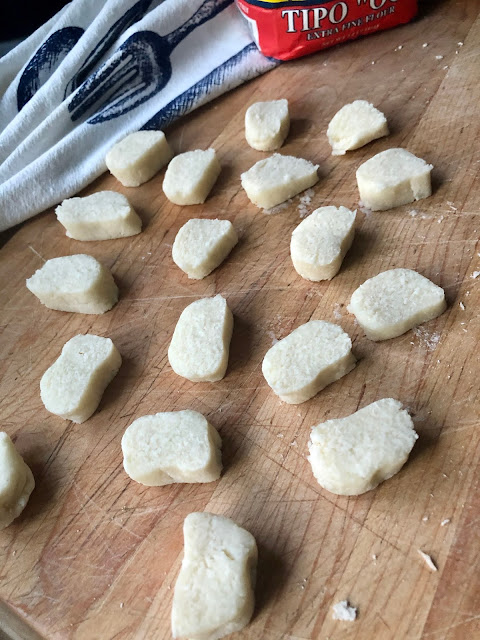 If you have an Idaho russet potato, then you can make this simple gnocchi recipe: 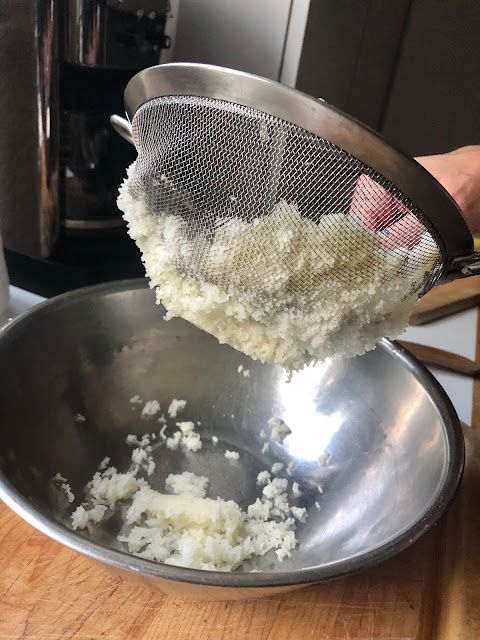 Take a baked potato (400F for an hour, or microwave one!), and while still hot, scoop out the filling, pressing it thru a mesh sieve....you are essentially ricing the potato, or aerating it.

Place the riced potato in a bowl with flour (a scan less than 1/4 cup) and a tsp of salt.

Mix this mixture together to form a dough, then start rolling it out into a long rope, and slice off 1" pieces.
Now your gnocchi is almost ready!

Just boil them until they float to the top (about 4 minutes). You can now eat them w/ pesto or whatever you like....but I decided to fry them in a cast iron skillet with butter and spinach and a dollop of basil pesto. 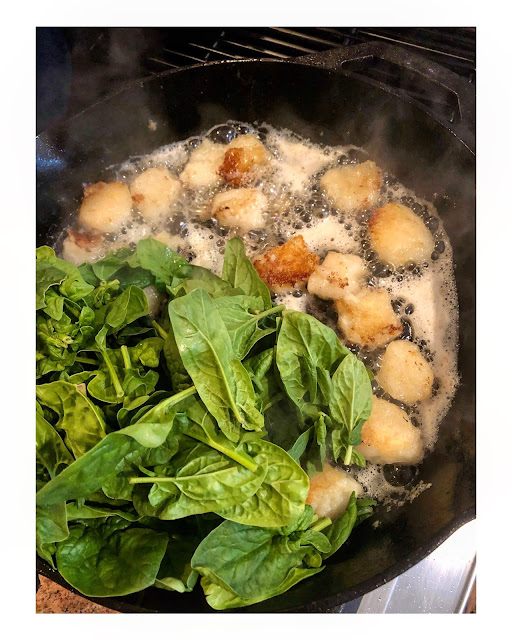 If you are making quantity, then obviously, double the ingredients.

Next up: Sweet Potato & Ricotta Gnocchi 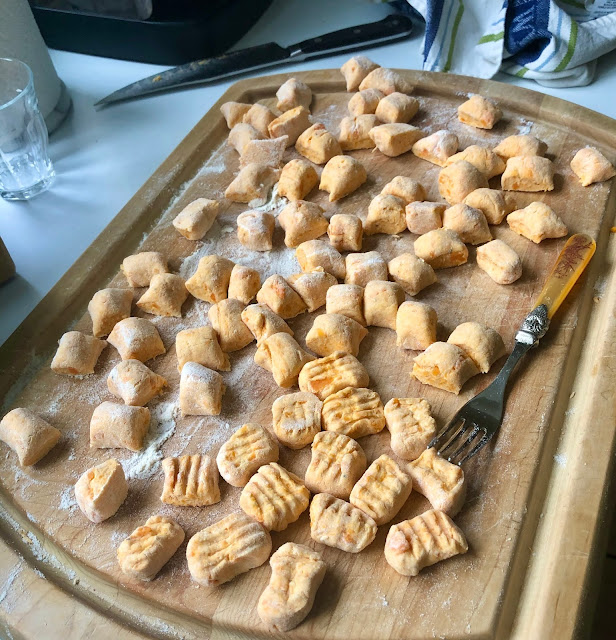 Same basic method as above, except no ricing or pushing the potato starch thru the mesh strainer. You can even microwave your sweet potato if you like.
(This recipe makes a lot more gnocchi than the russet potato recipe).

Do the same thing as the russet potato gnocchi recipe above....mixing everything together until it forms a dough. The dough will eventually come together, don't worry. I dumped mine out onto a floured board and kept at it. 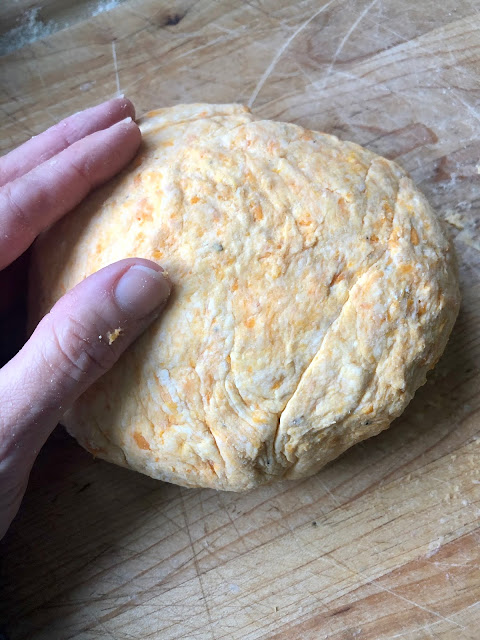 It will form a nice large piece of dough. 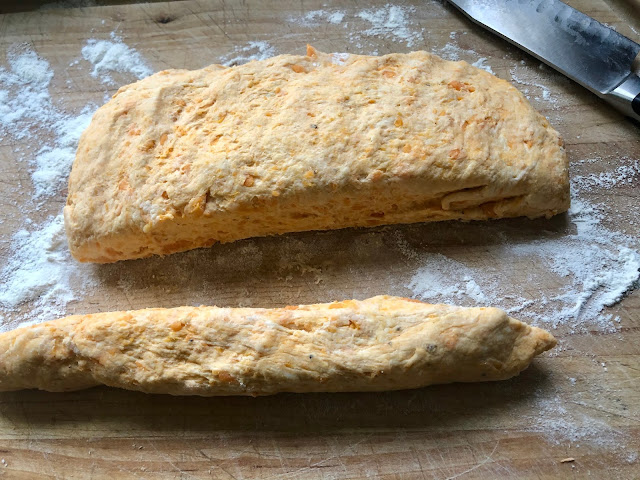 Form the dough into a loaf shape and cut off long ropes and start rolling them.

Cut off little 1" pieces and you are almost ready!
You can now freeze them for later, or boil them for tonight.

Same method as the russet potato....boil for 4 minutes in salted water. 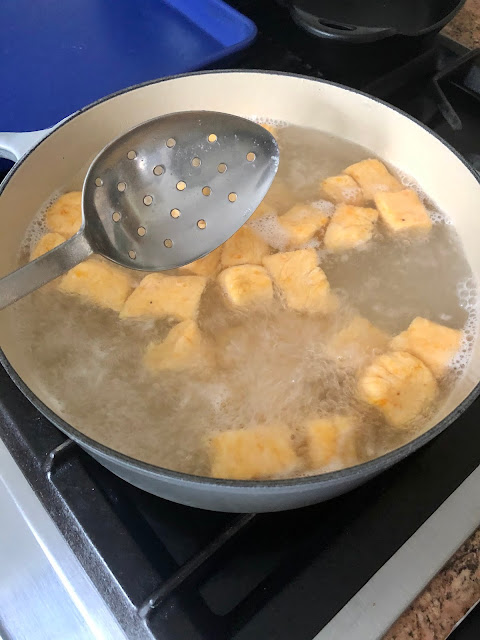 They are done when they float to the top.

Drain them and toss w/ some olive oil so they don't stick. 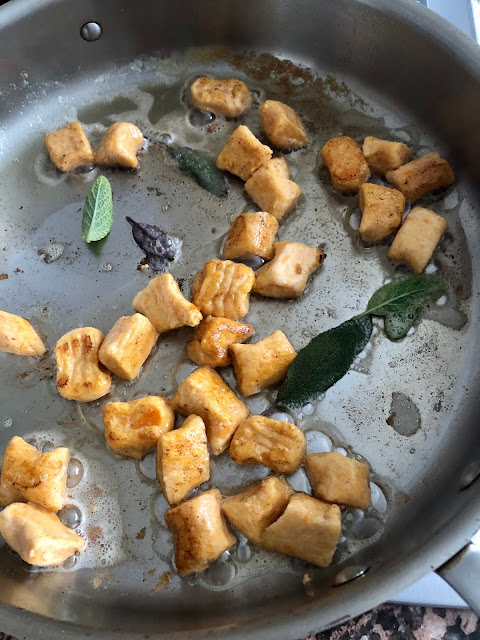 I also fried these in some butter and served with sausage and broccolini. Fried sage leaves for the top. 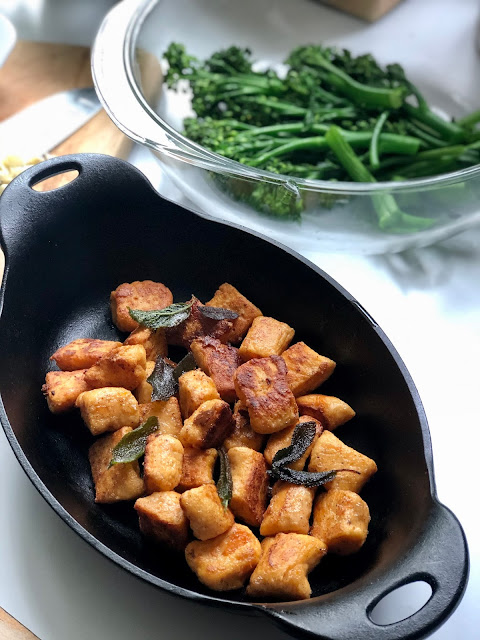 You CAN teach an old dog new tricks (that would be me!). 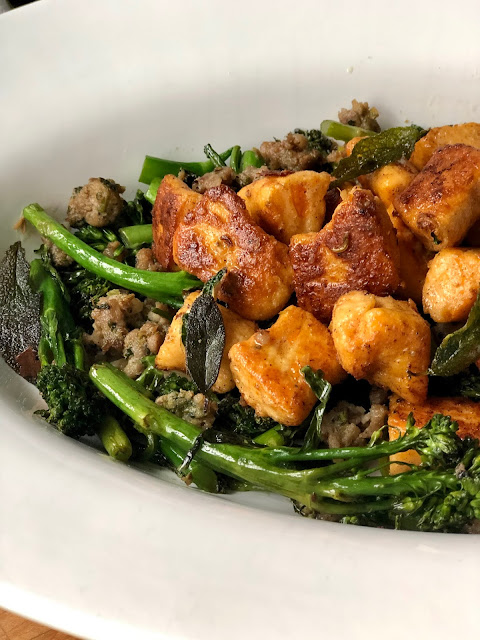 Katie C. said…
I agree with you, all the gnocchi that I have tried are leaden sinkers. So, of the two you made, which is fluffier and which do you like better? My sage plant survived the winter again, yay!
May 1, 2020 at 8:12 AM

I LOVE sweet potatoes, but the baked russet potato recipe gnocchi were much lighter (no ricotta in them).
1 potato only makes about 12 gnocchi, so make sure you bake 2 potatoes. So easy.....the frying them in butter w/ sage makes them a 10.