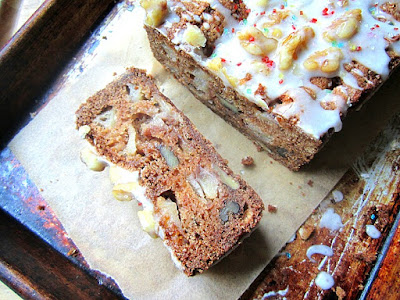 There is always room for another apple cake in your recipe box, right?

I never get tired of them.

It's an old recipe from my friend Amy who has a cute homey cookbook from years ago called "Secrets of a Home Cook" (you can follow her on instagram).....it's a recipe collection and stories of her family, and every recipe is a winner.
Not sure if you can find it anymore, but you can certainly contact her and she will send you one.

She calls this an apple bread....but that's only because it's baked in a loaf pan. It's a cake.
And I took the lead and iced it with a cinnamon walnut glaze, but you don't have to.....(but I suggest you do).

If you've noticed lately, instead of using the full amount of all purpose flour in recipes, I have been taking out 1/2 cup of flour and adding 1/2 cup of almond flour instead. But feel free to use just the flour if that's all you have.

It was also the debut of my sparkle sugar! I could not resist buying this pretty sugar.
It makes every cake special!

I guess I have become a baking geek. 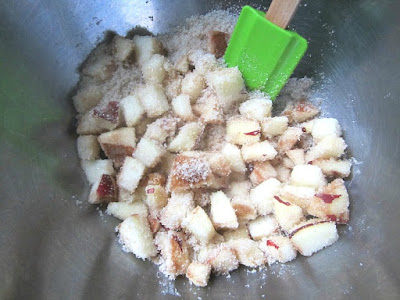 Mix in the rest of the ingredients......adding in the flours last.

Scrape batter into a well greased loaf pan and bake for 1 hour in a 325F oven.
Let rest in the pan for 15 minutes before transferring to a cooling rack.

Mix all ingredients with a fork until you reach the desired consistency. If the icing is too thick, then add in a drop more of milk.

Once the cake is cool, drizzle the icing all over the loaf. The walnuts will stick to the cake once the icing has cooled and hardened. 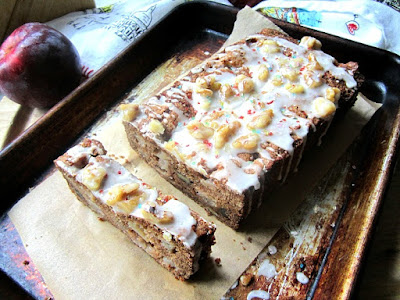 I kept this cake in the fridge, and it was fantastic COLD.
We loved it.

Stephanie said…
Any cake recipe that I don't have to get the mixer out for is a winner in my book. Thanks for posting this.
November 30, 2017 at 9:14 AM

Mary Reilley Clark said…
Our non-teaching staff at school does a 12 Days of Christmas treats. I cannot compete with the fancy cookie bakers, so I am making two cakes. This will be one of them! Thanks!
November 30, 2017 at 9:26 AM

Catherine said…
This looks amazing. I love apple cakes, especially those mixed with a spoon.
December 1, 2017 at 3:17 AM

Ginger said…
Had to make this cake but started too early in the morning. Result: from my alphabetized spice rack, I pulled chili powder instead of cinnamon (same brand and jars). Surpringly good cake, so much so that my friend thought I should make it with chili powder again. A tiny bit of heat. May use both cinnamon and chili powder next time. Also, my apples were gigantic, so I ended up with only a little batter holding together this moist, delicious cake. Thank you! Love the almond meal!
December 4, 2017 at 8:39 PM

How funny.......actually I love chili in desserts! especially with chocolate or cinnamon (Mexican desserts).

I did not use almond meal, but almond flour, which is lighter, but they both would work.

Maybe that's why your name is "GINGER", cause you're spicy!