Zucchini Pie in the Sky....with ZOODLES 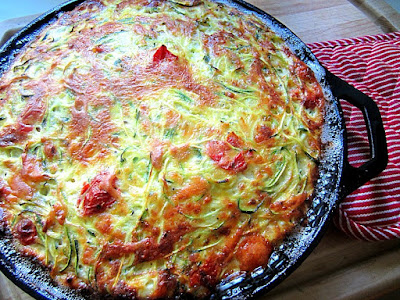 You know I am over the zoodle craze (spiralized zucchini).....but I saw a recipe for zoodle pie in Cooking Light magazine, and thought it was a good idea.
It reminded me of the spaghetti pie that I make with leftover pasta, mixed with eggs, baked in a cast iron skillet.

The original recipe has you cook the garlic and tomatoes in a pan, then put everything in a foil covered springform pan to bake.

I decided to take matters into my own hands and just prepare as if it were a spaghetti pie. Much easier.

You can use grated zucchini if you don't want to use zoodles, but remember, zucchini gets very wet, so you have to wrap the grated zuke in paper towels to get rid of most of the moisture before you bake it, or your pie will be soggy.

This is a great recipe for all that zucchini in your summer garden. 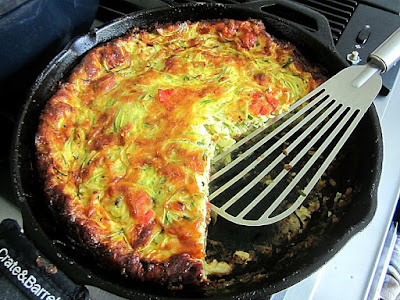 Wrap the grated zucchini in paper towels for 30 minutes to drain moisture. I did this with the spiralized zoodles too.

Mix all ingredients in a large bowl and pour into the greased skillet. 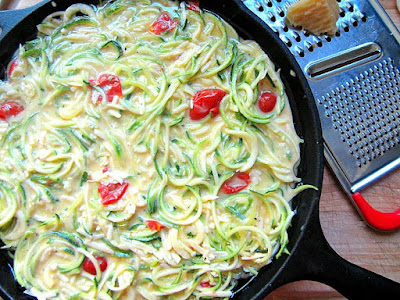 Bake 50-60 minutes until golden and the middle is set. 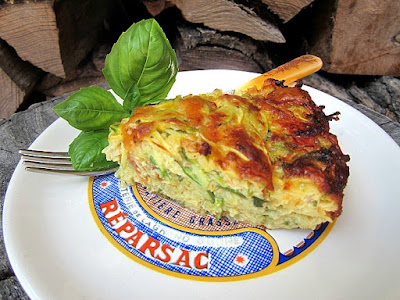 Katie C. said…
Looks yummy! You don't set the bottom first on the stove top? I love the basil. I've actually been able to keep up with mine this year so my plants are still flourishing instead of going to seed. Pesto ice cubes in the freezer. In the middle of winter, it's a breath of summer ;-)
August 7, 2017 at 9:05 AM

Stacey Snacks said…
Katie C.,
I didn't set the bottom like a frittata, I just baked it straight in the oven like a quiche.
So easy and SO GOOD!