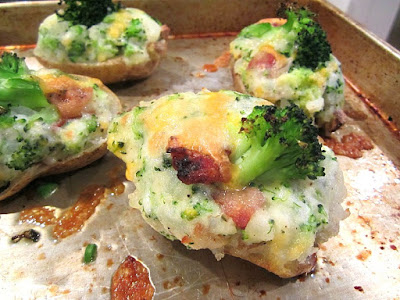 This may not seem very springy to you, but a friend told me she does "baked potato night" w/ her high school boys during the week.

They do leftover chili, leftover vegetables, whatever they have, and pile it on top of baked potatoes.
The boys do all the prep work and get involved....it sounded like a great idea for an easy weeknight dinner to me.

A baked potato.
I haven't thought of one in years.

Remember Idaho potatoes? When did they go out of fashion?
I seem to only buy Yukon Gold, or red new potatoes....and purple potatoes whenever I see them.

So, the delicious, nutritious Idaho russet has been forgotten by moi.

My mother made a baked potato almost every night to accompany our delicious frozen vegetables, and dried out protein.

She always cooked them in tin foil......and we were allowed one pat of butter, so we wouldn't get fat.

Now the truth comes out, why I am obsessed with good food.

My friend said she had made a double batch of these to deliver to a gal in our town who was having chemo treatment, and I also thought what a great idea when you are helping someone out by delivering meals.

These are a crowd pleaser and easy to make ahead.

You don't have to do the double baked thing if you don't want to.....you can just pile the toppings on the baked potato.....but who doesn't love some butter and sour cream?

Forget the Wendy's Baked Potato Bar (do they sell them anymore?).

These were so comforting and delicious. Made me think of my grandmother who always made me twice baked potatoes. 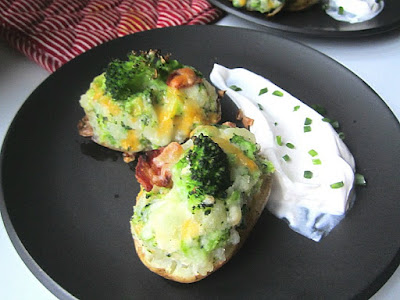 I baked 3 small potatoes, so I had 6 small halves.
You can microwave the potatoes if you like, or bake them in a 375F oven for 1 hour.

Crisp up some bacon (for 3 potatoes I used 3 slices of bacon) and crumble.

When the potatoes are cool enough to handle, scoop out the potato mixture into a bowl, leaving just the shells.

Blanch the broccoli for 2-3 minutes and chop into small pieces. Add the chopped broccoli to the potato mixture.
Season w/ salt & pepper and garlic powder.

I added 3 tablespoons of melted butter for the 3 potatoes.
2 tbsp sour cream also goes in the mix along w/ about 1/2 cup of shredded cheddar cheese......you can use more butter, less cheese, whatever you like. I don't measure. 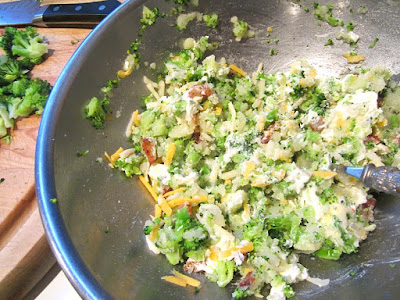 Add in some of the bacon, saving some for the tops.

Scoop this mixture tightly into the potato shells. I used my hands to make sure they were tightly packed.

Top each potato w/ piece of chopped broccoli and a piece of crumbled bacon. 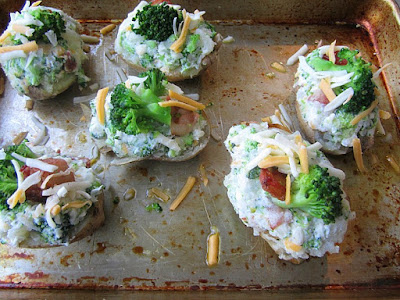 Lay the potatoes on an oiled baking sheet (the olive oil insures the skins get nice and crispy). Rub the skins in and on the oil to coat.

Place tray back in oven for about 10 minutes, until the cheese is melted.

I turned on the broiler for 2 minutes for a nice browned look. 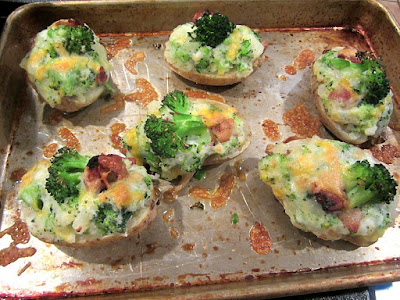 Serve w/ a side of sour cream and chives.

Bebe said…
Idaho russets, labelled as such are now in our grocery stores. Nice sized ones for baking. Trader Joe’s also has bags of baking potatoes that mention neither Idaho nor russet, but are OK and usually the right size.

I never did the foil or the oil rub as we liked crisp skin with its own distinctive taste and texture. Foil wrapped potatoes always tasted odd to me. As a kid I almost liked the crisp skin better than the potato inside, which in a russet is wonderfully mealy and yummy. Much, much later I discovered little potato skins, baked until crisp, with sour cream, caviar and served with some nice champagne, but that’s another story.

Now for two of us, I do them in our microwave, being sure to poke them all over with a cooking fork so that they don’t explode. Two potatoes, high heat (ours is 1300 power), 3 minutes per side and they’re done.

Catherine said…
Stuffed baked potatoes are one of my favourite meals. They are often referred to as jacket potatoes in the UK. Baked beans and cheese are a fave filling. Yours look amazing.
April 5, 2017 at 3:11 AM