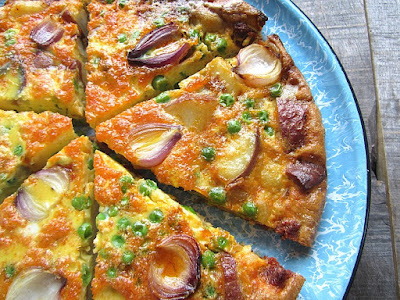 Whenever I say I am making a tortilla Espanola, I get sidetracked.

I have good intentions of just frying the potatoes and onions and adding the eggs and doing the flip trick, but I always throw something else in the mix to make it something else.

I have been told by many purists, an authentic tortilla is JUST ONIONS AND POTATOES AND EGGS. Done on the stovetop, never in the oven.

It is served as part of a tapas menu usually with aioli.
Ok, ok, I got it. That's why I am calling this a "frittata" instead of the other.

To my potatoes and onions, I added chorizo and peas......I like to see green in my omelet, and I like some ham.

This was delicious. Great for breakfast, or later at room temperature for snack.

I used hot sauce instead of aioli this time. 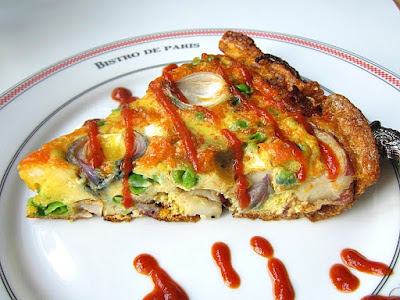 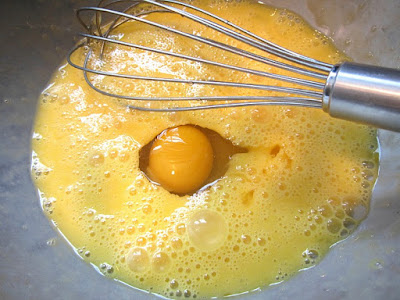 In a large heavy nonstick skillet, heat some olive oil (enough to coat the pan).

Cook the potatoes about 8 minutes, adding more oil as needed. You can also used leftover cooked potato, which makes life easier.
Add in the onion and chorizo and cook another 2 minutes until onion is cooked. 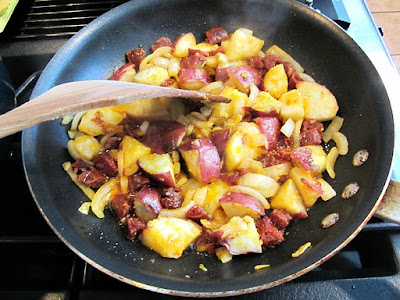 Whisk eggs and peas and slowly pour over everything in the pan.
Season w/ a pinch of salt & pepper.
I added some tiny red onions to the top because I had them, just for aesthetics, but you don't have to. 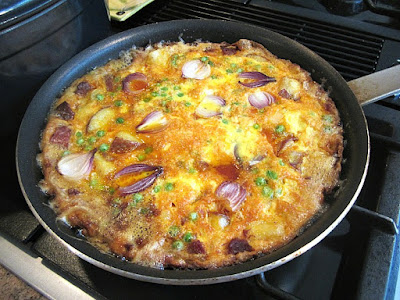 The omelet should easily slide out of the pan.
Cut into wedges and serve. 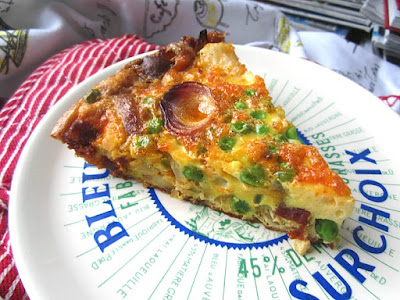 Bebe said…
I always chuckle a bit when I see that some “purist” (not you, Stacey) has ruled what something like a "perfect tortilla" is. For many years I had a live-in cook/housekeeper from Mexico. I also had an aunt-in-law from Mexico. We cooked together a lot. There are no rules. Especially for this kind of put-together which is, for them as for us, another way to use up leftovers. I’d guess there are as many versions of tortilla in Mexico as there are mama-cooks. And each of them probably makes a number of variations depending on their whim or what’s on hand.