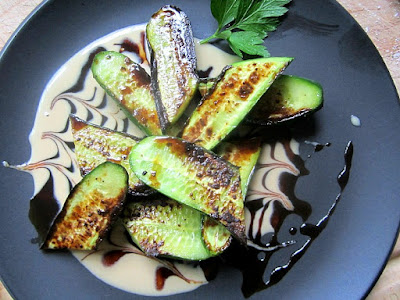 I love the blog Lottie & Doof.

Tim is a bit negative at times, but posts great travel pics, and he loves to bake.
Anything he posts I know is going to be good. He hates lemon zest, btw. Oh well, his loss.

It sounded so odd, roasting a cucumber?
Hey, why not? They are a gourd, and they certainly have more flavor than the dopey zucchini (which is flavorless!).
He swore these were delicious, and they were.

I skipped the crema, and made my own concoction with tahini (ground sesame seeds) and pomegranate molasses.
Feel free to just place on a bed of store bought hummus.

You will not believe how delicious these little treats were!

Make sure you are using the tiny Persian cukes, which have much less water than a regular cucumber (which I don't think would work here).

Crema:
some tahini mixed with pomegranate molasses; or creme fraiche mixed with pimenton......or sour cream mixed w/ dill and garlic (like a tzatziki), whatever you like.

Sprinkle the cucumber halves with kosher salt & black pepper.
Mix with a little olive oil in a bowl to coat.

Heat a well seasoned cast iron skillet and lay the cucumbers face down in the hot pan to sear. 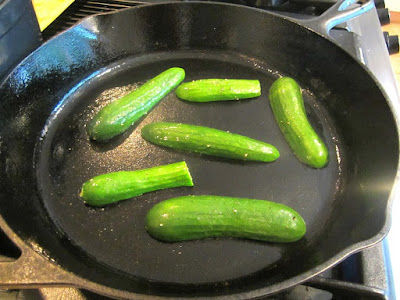 Do not disturb for about 6 minutes, they should be nice and charred.

Slice the cucumbers in half down the middle and plate on top of your choice of crema! 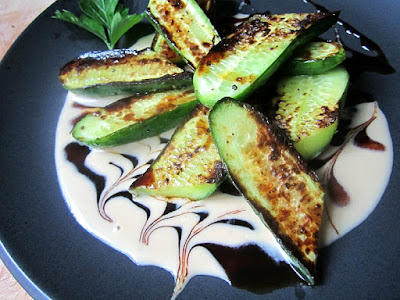 Let me know if you try this weird but good recipe. :)

Eleanor I. Cook said…
I love roasted anything when it comes to veggies and I believe you when you say this might not work well with common, big, watery cucumbers. However, since I have them coming in in droves right now, I am going to risk a couple of the common type that are on the smaller side and I will let you know if it works. I truly need some new recipes to use them all up! Eleanor Cook
July 19, 2016 at 9:18 AM

Stacey Snacks said…
Eleanor,
Trust me when I say they won't work.......regular cukes have so much liquid/water!

I even have to drain them when I use them for cucumber salmon canapes.

Why don't you just make a big batch of pickled cucumber salad w/ dill?
I love it, and it lasts for a week in the fridge!