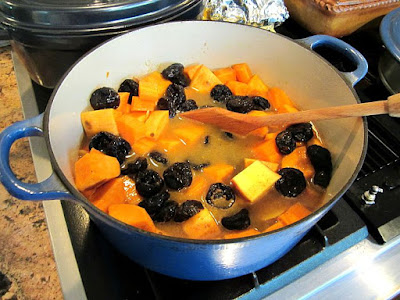 What did she say? Tzimmes? What is that?

It is traditionally served during Jewish holidays, and best served along side a brisket!

My grandmother's handwritten recipe uses chuck steak. She would stew the meat in with the veggies, until it all fell apart. Some people use a cut of meat called flanken in their tzimmes.

Your house will smell wonderful while you are cooking it.
It is also a great vegetarian dinner and perfect w/ roast chicken too, and I will be making a big batch for Passover next week.

Here is my wonderful grandmother's recipe:

Peel and cut up all your potatoes and carrots.

In a large stockpot, heat the butter and cook the vegetables in the butter (except the prunes), just to coat.

In a large measuring cup, whisk the orange juice, cinnamon, sugar, honey and stock. Pour into the pot w/ the vegetables. 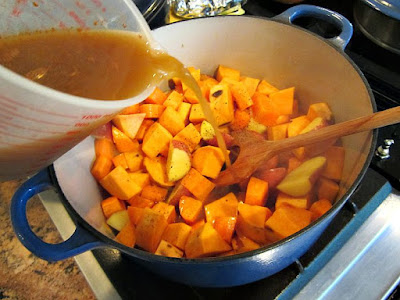 Bring to a boil and add in the prunes.
Turn down to a simmer and cover with a tight lid.

Either bake in a 350F oven or simmer on the stove for an hour and a half, until vegetables are super soft.

Best made the day before and reheated. 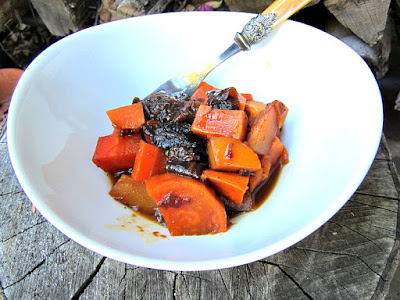 My family likes it mushy, but I prefer the vegetables to be in recognizable pieces!

Anonymous said…
This isn't a complaint per se, but there could be quite a "tzimmes" if there isn't a warning about the butter in your recipe. Your recipe is dairy and if served with brisket it won't even be "kosher style."
April 13, 2016 at 8:26 AM

Stacey Snacks said…
Anon,
This recipe has no meat, however, you are correct!

My grandmother's original recipe used butter and meat together!
She wasn't kosher, obviously!

Just use oil, if you are adding in the flanken!
:)

Thank you for pointing that out.

Foodiewife said…
What a great thing for you to introduce to me. I love anything with sweet potatoes. I love prunes. What's not to love about this? I vote to eat this as a side dish.
April 13, 2016 at 8:50 PM

Carol said…
Hi Stacey,
This recipe sounds great...does it taste better baked or cooked on the stovetop. I am making this on Wednesday for Passover dinner on Friday. Did you ever just use sweet potatoes and not Yukon Gold potatoes? If yes, how did it taste?
April 18, 2016 at 7:26 AM

Yes, you can omit the white or Yukon gold potatoes.....but I like the addition of regular potatoes, cause it cuts down all the sweetness w/ the prunes and honey, etc.

You can also add in more of whatever you like.....add in another sweet potato, etc. It's a peasant dish, and really has no rules........the longer you simmer it, the mushier it gets.......I used red new potatoes w the sweet potatoes here.

Don't worry, it will come out great!
Have a happy Passover!

Unknown said…
It is health that is real wealth and not pieces of gold and silver. See the link below for more info.