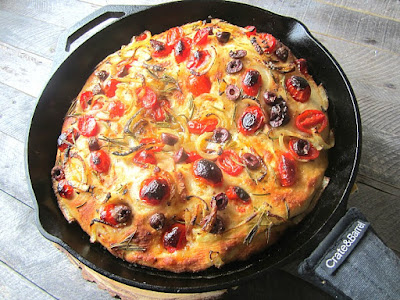 I haven't baked bread in forever.

My yeast expired in 2013 and my bread flour was unopened in the garage pantry and almost ready to be thrown out if I didn't use it soon.
It was time to get back into it.

I had never made focaccia bread and it was about time I tried it. I've always been so intimidated by focaccia.

Jim Lahey to the rescue.

You know I love his book called MY BREAD, and have had great success baking bread when I was always yeast challenged.
His No Knead recipe has turned me into a bread baker. 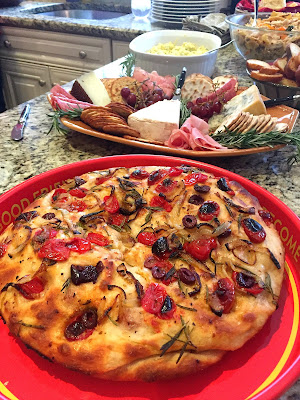 There is literally no skill involved here, you just have to have patience......which I definitely don't have, so luckily the bread makes itself while I am sleeping.

It's a science thing going on here......so don't ask me how it works. You can read about that on someone else's blog, all I know is that this was so good, that I am hooked.
I have no bread machine, no bread hook attachment, it's just me, my hands and I, and a big glass Pyrex bowl.

I was worried that the expired yeast would not rise the dough while I was sleeping, but when I woke up to check on it, there it was, the dough had filled the bowl and doubled in size. The hell w/ expiration dates (in this case, anyway).

I decided to make a topping of cherry tomatoes, sauteed onions, fresh rosemary and kalamata olives.
Oh, so good.

I am going out tomorrow to buy some new packets of instant yeast so I can get back into it.

I have found a new love. 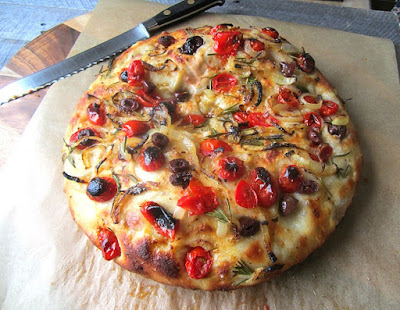 Combine flour, salt, yeast, and water in a large bowl (I use a big glass Pyrex bowl). Mix with hands or a wooden spoon until no dry flour remains. The bowl should be at least 4 to 6 times the volume of the dough to account for rising. 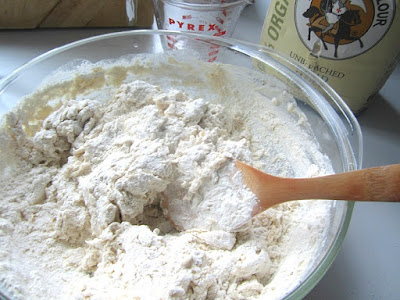 Cover bowl tightly with plastic wrap, making sure that edges are well-sealed, then let rest on the countertop for at least 8 hours and up to 24 hours. Dough should rise dramatically and fill bowl. I let my dough rise for 16 hours, and it was perfect timing.

Sprinkle the top of the dough lightly with flour, then transfer it to a lightly-floured work surface. Form into a ball by holding it with well-floured hands and tucking the dough underneath itself, rotating it until it forms a tight ball. 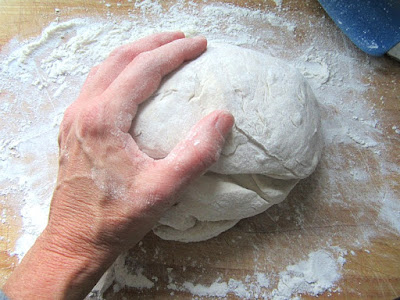 Pour half of oil in the bottom of a 12-inch cast iron skillet. Transfer dough to pan, turn to coat in oil, and position seam-side-down. Using a flat palm, press the dough around the skillet, flattening it slightly and spreading oil around the entire bottom and edges of the pan. Cover tightly with plastic wrap and let the dough stand at room temperature for 2 hours. I had a tough time adhering the plastic wrap to the cast iron, so I laid the plastic wrap on top, then covered w/ a 12" pot lid!

About an hour before baking, adjust an oven rack to the middle position and preheat oven to 550°F. You want a really hot oven.

At the end of the 2 hours, dough should mostly fill the skillet up to the edge. Use your fingertips to press it around until it fills every corner, popping any large bubbles that appear. Lift up one edge of the dough to let any air bubbles underneath escape and repeat, moving around the dough until there are no air bubbles left underneath and the dough is evenly spread around the skillet.

Place your toppings over the dough, and press down, otherwise the olives and tomatoes will most likely fall off the bread after baking. 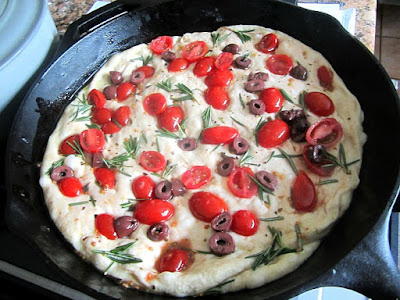 Drizzle the rest of the olive oil over the pan and sprinkle w/ kosher salt.

Bake for 16 minutes (the recipe says up to 24 minutes, but mine was done perfectly at the 16 minute mark). 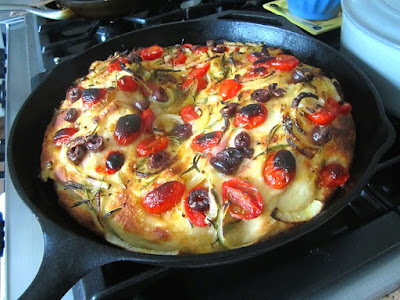 The bottom of the bread should be nice and crisp. Remove with a heavy spatula and slice into wedges. 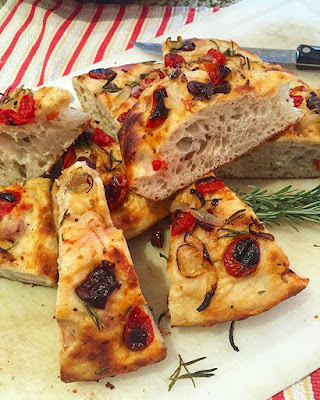 Katie C. said…
Well done! It's definitely on my to do list now. I am going to check if the book is available from my library. Another good bread book that I bought after its library test run is "Artisan Bread in Five Minutes a Day."
March 16, 2016 at 8:37 AM

Anonymous said…
Wow looks incredible, do you think i could use a 10inch skillet instead of 12inch.Thank you for your great recipes every day.
Nathalie B.
March 16, 2016 at 8:44 AM

Bebe said…
My favorite bread recipe came from Jacque Pepin decades ago. Mixed in a food processor (or by hand as you do), then plopped into a large plastic container with a lid and ignored overnight. It swelled up and filled the container.

This sounds great. I love focaccia and I have made Nancy Silverton's basic
foccacia which is outrageous but a lot more tedious (but worth it)
THis looks and sounds great too, will try . Thanks!!

Bebe said…
The recipe calls for a 550 degree oven temperature. I believe only a cast iron pan or a pizza stone could withstand that high temperature.
March 16, 2016 at 11:32 PM

Natalia said…
You make it look so simple, I'm going to have to try this. My husband generally makes the focaccia in our family, and generally in the summer months when we have an abundance of fresh tomatoes and basil.

Sherry Klusman said…
This sounds wonderful and I can't wait to try it. I have two questions......are you really using 1T of kosher salt? Seems like a lot. Second question, you mention leaving the dough to rise while you slept, but you mention in the recipe to let it rise two hours -- will this be enough time? I understand all your other steps and look forward to hearing from you.

Yes, a full tbsp of kosher salt, which is not as salty as Morton's iodized salt....

and I wrote my dough took 16 hours to rise.......and in then the next day when you transfer to the skillet, it should take 2 hours (you could leave it longer if you like) to spread in the pan.

If your dough is not rising for some reason, by all means, you can leave it up to 24 hours.......I have had bread dough take that long, but in this case, mine took 16 hours, then the 2 hours for the 2nd rise.

Carolyn said…
This looks amazing! I need to invest in a cast iron pan I guess ( I have a childhood memory of disgusting scrambled eggs cooked in that pan). Thanks for the motivation!!
March 22, 2016 at 12:35 AM

Louise said…
No need to worry about expired dry yeast. Keep it in the freezer. It will be active indefinitely.
January 6, 2018 at 8:49 PM

Louise said…
Carolyn remembers “disgusting” cast iron pans. This can be avoided by NOT following the usual directions for cleaning (actually NOT cleaning) that most websites give. Once a cast iron pan is seasoned (it might take a few weeks) you can clean it with soapy water and scrub it with a steel wool pad with no ill effects. The cast iron does not absorb soap, in fact it doesn’t absorb anything but old food residue does pile up on it, making it disgusting. Despite what people say, you don’t have to treat cast iron as if it were fine china. It gets sticky and yucky that way. I have even put my cast iron skillets in the dishwasher. It removes all the sticky residue. You can season it again by rubbing it with oil and putting it in a hot oven. My cast iron ware is so well seasoned, I can wash them in the dishwasher and I don’t have to season them again. It’s no wonder that a lot of people are put off by unwashed and sticky cast iron cookware. Not washing it properly It is one of those old wive’s tales that should be put out to pasture. If you happen to see a little rust, scrub ut off and reseason the pan. Believe me, you’ve ingested worse things than a little rust. My great grandmother had many cast iron pans and they weren’t always free of every vestige of rust. She lived to 95 and raised 10 healthy, long-lived children—who wash their cast iron pots and pans with soapy water and scrub them with steel wool to this day.
January 7, 2018 at 12:06 AM

Just made my first of this recipe. My cast irom pan is 11 1/2 inches, I think that was ok. I did let it go to 20 minutes and probably was a few minutes too long.The reason I did that is because my oven only goes up to 500 degrees not 550. Also, I should have cut my slices of onion a little wider because they did burn a little bit. My other comment is the salt. I misread the amount of salt and used a T instead of a t :(. Anyway, lesson learned My fault. Anyway will definitely make again. Will add more tomatoes and onion. You only learn by doing. Thanks for sharing!
April 10, 2019 at 7:17 PM