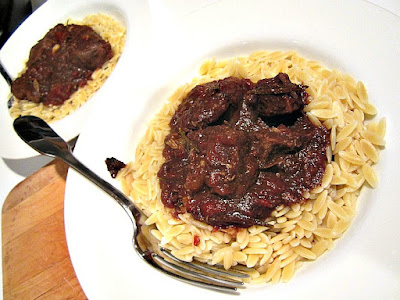 I have had this recipe in my recipe folder since 1990. It is from an old issue of Gourmet Magazine, written by my favorite food writer Laurie Colwin, and I swear, though it may sound stupidly simple, it turns out amazing!

It has only 3 ingredients.
That's it folks.

Usually, I would never post something so simple, however, I see that Smitten Kitchen posted it, and she has a best selling cookbook!
So I will post it too. It may save someone from a lot of trouble.

What I haven't told any of you loyal readers, is that I fractured and sprained my ankle in early December.

I will spare you the gory details about how I did it, but I will tell you it was not from stand up paddle, or skiing.
It was a stupid accident, as most accidents are.

I have been miserable in a boot cast and cane for the entire month of December and January. I haven't gone out of my house much; haven't put any makeup on or colored my hair.....and if you can believe it, I lost a solid 6 lbs. (I guess from not eating dinners out).

Cooking has not been easy, "but things could be worse" (as I have been reminded 1 million times). 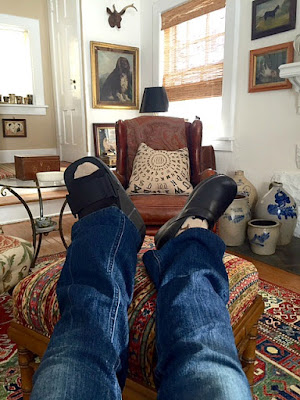 I have a personal assistant named Henry, who has been doing everything for me. Driving me to doctor's appointments, food prepping, setting up blog photos, food shopping and cleaning up the kitchen. We have had a lot of sushi and pizza takeout, which have been very disappointing, to say the least.

I bought a roller stool that I can sit on in the kitchen, so I can roll from oven to fridge and peel and chop at counter level and spin around (my hairdresser's genius idea!!!!). This, ladies and gentlemen, is how I have been preparing all the delicious food you have been seeing.
I won't give up!

So, the story goes, I was going to tackle my Belgian Beef Carbonnade, but couldn't stand that long, browning the meat and chopping the veggies........and I remembered this simple recipe.

You can add some wine, soup mix, herbs, veggies, whatever....it is most forgiving. There is no browning or fussing and makes a delicious meat sauce for pasta. Throw in what you have and put a lid on it. It is even better the next day.

I hope you never break any bones, or need a reason to make this recipe, except that it is delicious! 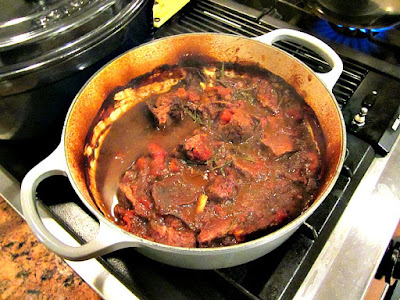 3 lb. whole chuck roast (you can also use cut up stew cubes)
1 28 oz. can of chopped tomatoes (or a 14 oz. can tomatoes and 1 cup 1/2 red or white wine)
1 head of garlic, cloves separated (I peel mine too, so I don't have to do it later)
fresh rosemary sprigs (optional)

Place the meat in a Dutch oven w/ lid. My Le Creuset Dutch Oven is perfect for this recipe.
Season the meat liberally with kosher salt and pepper.

Pour tomatoes over the meat and scatter with the garlic cloves (I peel my cloves, so they disintegrate into the sauce).
Add in anything else you would like.

I added in fresh sprigs of rosemary and some leftover white wine.

Cover the pot and place in a preheated 300F oven.

I splash a tablespoon of cider or red wine vinegar at the end of all my beef stews (I just like the way it tastes).

Serve over pasta. The original recipe serves over orzo, which is just perfect! 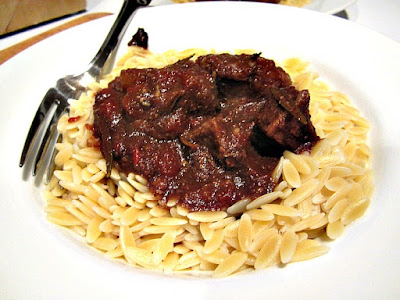 Bebe said…
A broken pelvis a year and a half ago due to a dumb fall. Catching foot on end of poorly placed parking lot block sticking out from our car - in a disabled zone. Block painted dark blue to match the striping on the disabled zone. Me in new glasses with bifocals. Recipe for disaster. I fell like a tree.

It is very difficult to do anything much with a disability. Running a high quality food blog like yours? Well nigh impossible. But you and your right hand Henry have pulled it off.

Older than you, I was left pretty creaky by my accident. Still am. So this recipe sounds terrific. Now to find a decent pot roast that doesn’t cost the same as filet mignon!

I would wish you a rapid recovery, but this kind of healing takes time (bones mend; soft tissue has been damaged and it seems to take longer)….so I’ll send you warm wishes for a complete recovery. Soon!
February 8, 2016 at 8:08 AM

Stacey Snacks said…
Bebe,
I am so sorry to hear of your fall!

You are correct, this is taking FOREVER to heal. I am out of the boot cast now, however, using an ankle brace, and so difficult to get anywhere. I can't food shop yet, or walk more than 100 feet without having to sit down.

I hope my good genetics take over, and help me heal, because I am over this!!!!

Anonymous said…
I nursed my 6'2" husband thru his broken ankle many moons ago.

He fell on black ice under a dusting of morning snow walking to the train and needed an operation to put in pins. Because he couldn't handle the commute by train or drive a car to NYC, he was home for almost 2 months.

My boys were very small and they still remember when dad was laid up and sometimes had to *peep in a jar*!!!

It was a nasty winter that year, and I remember making lots of soup with big ring noodles I found at a local Italian food shop.

Good surgeon and my husband healed well - he runs as part of his exercise routine NO PROBLEM!

I am so glad you have such a handsome & helpful nurse in Henry.

Putting my $ on you getting back to as good as new!

<3 Laurie Colwin 4eva! - so sad she's not here to see the explosion that's happened in the food world online & media.

Unknown said…
Sorry to hear about your ankle! My coworker did the same last summer. The only thing that cured her was...a trip to France! She started in Nantes, and by the time she got to Paris, she was pain free. You might want to look into that:) I hope your recovery speeds up!
February 8, 2016 at 11:46 AM

Bebe said…
Library Lady, I did that with two broken ribs some years ago. Fell on a bus on way to Versailles on Day Two of a long open-ended tour of Europe with First Class Eurailpasses. A 9-day recess on the beach in sunny Cannes helped. New clothes had to be bought to accommodate a seriously bloated waistline. But France really fixed it. Painful, but so worth it!

Stacey, there’s no question that good genes help. Without them, I’d have been in a wheelchair decades ago. Forever. Being a really active kid helped, too. We built strong bones and muscles with never walking when we could run, and sitting as little as possible.
February 8, 2016 at 12:03 PM

Ciao Chow Linda said…
I've been in a similar situation, as you know, but it was a finger on one hand the and elbow on the other arm that broke, making me able to at least walk (and drive with three fingers), even though cooking was a challenge. I think being unable to walk or drive makes it more difficult. That's where some tme in the sun to r&r really helps the spirit. I know it stinks but at least you've been blessed with a good helper, good genes (lost six pounds? I'd have gained 10 by now) and your great attitude. I can't believe how much good food you've posted in the last two months. It will soon all become a memory you'll look back on with wonder. Take the time to catch up on reading and old episodes of tv programs and movies you missed.
February 8, 2016 at 12:30 PM

Anonymous said…
Hi Stacey,
Thanks for sharing with us. I'm so sorry about your injury. Bless your heart! Wouldn't have guessed anything was wrong since you continued to blog as normal. Your recipes are the best. I broke my wrist really bad in October due to a stupid accident! To me, breaking an ankle is much worse! At least I could walk but couldn't fix my hair or drive for three weeks. The holidays were low key but I'm almost back to normal. Praying for you!!! Cathy in Idaho

Proud Italian Cook said…
2 months are now behind you, and lets face it, if you have to be stuck in the house healing the dead of winter is the best time, come spring you should be back on your feet, literally! But seriously this will all be behind you soon because I'm sure those spectacular genes you have are mending things as I write this. Sending healing vibes from The Windy City! xo
February 8, 2016 at 11:43 PM

Carolyn said…
This beef recipe looks like a dish I grew up on! The acidity of the tomatoes seems to make the meat so tender. And, I am just happy that it didn't happen right before your trip to Paris!! Should be well healed by fall:). Take care!!!
February 9, 2016 at 2:28 PM

Anonymous said…
Dear Stacey,
So sorry to hear about your injury.
Your posts are always so upbeat, no clue that you were suffering.
Loved this post...the pictures, especially the stool; the recipe adapted from wonderful Laurie
Colwin.
Hope your ordeal is soon at an end, and you can go out and have some
fun! You and your assistant deserve it!
Dennee, L.A.

Carole said…
Oh, goodness. I am so sorry re your injury. Eventually, doing exercises (or walking with a noodle) in a pool will be helpful therapy. I wish you a full recovery.

I LOVE Laurie Colwin's writing and remember being devastated when she passed. I also admired Mary Cantwell who wrote for Gourmet and often included recipes.

Natalia said…
Sorry about your injury - several years ago while hiking in South Mountain Reservation (after a heavy rainfall) I slipped on some wet leaves and fractured my ankle. Although not a big deal according to my doc, it hurt like hell and I really started paying attention to older people who have a hard time getting around as I was in so much pain (as well as in an unattractive boot). This too shall pass - and I hope without much pain.

What a fun idea for a cold winter night. Will give my husband an excuse to venture out for a good piece of beef.
February 11, 2016 at 9:56 AM