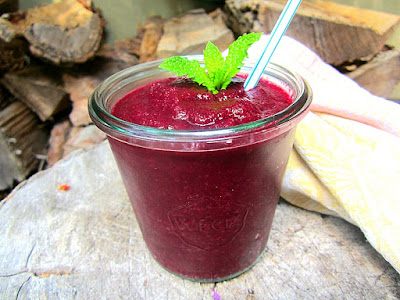 I swear, I never thought that I would be posting a smoothie recipe.

But this late night food junkie (me), decided instead of making beet soup, I would try a smoothie with what I had in the fridge.

I had 2 roasted beets, an apple, kale (always have it in the garden), and some Trader Joe's frozen cherries.

At first I put everything in the blender, and nothing moved. 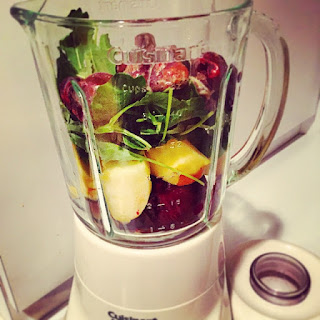 So, I transfered the goodies to my food processor, and it made a nice pesto type of product.

Back to the blender to puree, and then added some orange juice just to thin it.

This is WOW good.

Most smoothie recipes use RAW beets, but I had roasted beets, and the results were fantastic, richer and darker in color.

I made this the night before, and it was perfect the next a.m. for breakfast.

Here is how I made it, adapted from this recipe (which recommends a Vita-mix to make life easier): makes about three 6 oz. smoothies

2 large red roasted beets, cut up
1 large Fuji apple (I peeled mine, because it was not organic)
handful of frozen cherries (about 8)
handful of kale
1/4 cup of fresh orange juice (or a whole orange)

Place everything in your food processor or vita-mix. Pulse, then puree in a blender or with an immersion blender.
If the smoothie is too thick, you can add some water to thin. 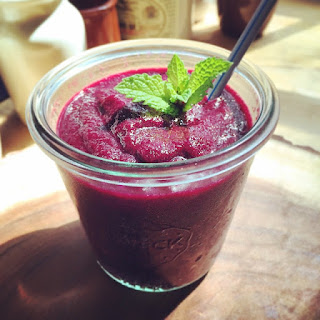 Serve chilled with a straw!

Anonymous said…
Off topic, Ms. Snacks, but a friend emailed me this today, and I wanted your opinion on the gnarliest kitchen gadget ever!

ps the ingredients to your smoothie sound like they'd marry well, ravishing color, and nice to omit the dairy for maximum cooling refreshment!
July 22, 2015 at 11:45 AM