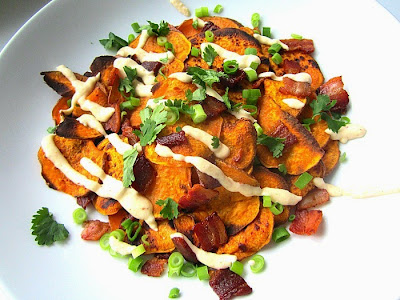 First let me apologize that I didn't post this recipe BEFORE the Super Bowl yesterday.

I didn't know how good it would be!

I had my pinterest eye on this recipe, and decided to try them yesterday for game day snacks.

I made homemade sweet potato chips by baking them in the oven.
Some of them burned and I had to keep an eye on the 3 trays, but it was worth it in the end.

I made a cheese sauce w/ a Mexican cheese blend, mixed with crema and some chipotle pepper.

This platter was devoured in a matter of minutes.

Bookmark it for next football season, or just make them because you want to!

Swimsuit season isn't for another 4 months! 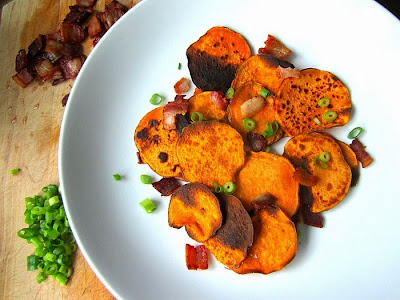 1 large sweet potato, cut into thin slices (use a chef's knife instead of a mandolin, or they will be too thin and they will burn)
kosher salt
olive oil
1/4 lb. bacon, cut into pieces
2 green onions, sliced thin (I use white and green parts)
fresh cilantro

Lay out on 3 heavy baking sheets, making sure they are not overlapping. 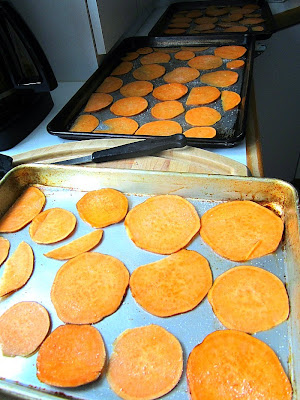 Cook 10 minutes, then using tongs, turn over for another 10 minutes until crispy.
Lay on a cooling rack so they stay nice and crisp.

Fry the bacon and drain the grease.

Whisk the cheese sauce and place in the microwave or double boiler for 30 seconds, or until a nice creamy sauce forms.

On a platter, layer the chips, along w/ the green onions and bacon, overlapping each layer.

Drizzle with the warm cheese sauce and serve immediately. 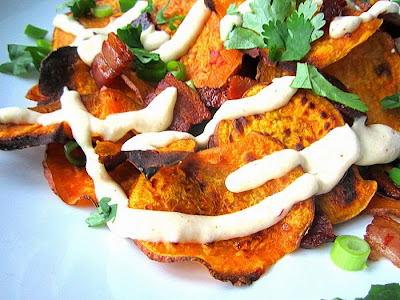 Content in a Cottage said…
Oh Yum. I can't believe you made those chips from scratch. The toppings look delicious too. I had to google this morning to see who won the super bowl and then I had to google to see which team Tom Brady plays on with his deflated footballs. His team won.
I think I was hoping for the opposite, non-sports fan that I am.
xo, Rosemary
February 2, 2015 at 9:01 AM

Natalia said…
These look tastier (and healthier) than any baked potato skins. Yum!
February 2, 2015 at 3:34 PM