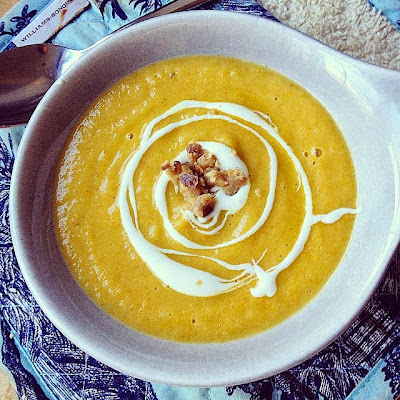 I apologize that I am posting this recipe so close to Thanksgiving (which is two days away!).
I know you already have your menu laid out and probably are cooking right now!

I decided at the last minute that I needed a soup this year, which I never do on turkey day. But since I bought a lot of French chestnuts, I thought I would use them here (and a chestnut apple cake is coming tomorrow, so stay tuned).

You can pin this recipe for next week, there is no law that says you have to use chestnuts only on Thanksgiving!

A few notes about this lovely soup.

I read some of the readers' comments over at Bon Appetit, and some said the soup was a bit flat.

I would agree.
If you don't make the fantastic maple creme fraiche and the chestnuts, then it is just a boring old pureed vegetable soup.

Also, I used some of my freezer bank of homemade stock, so this soup was extra good.

I cut down on the butter in the recipe and used a bit of olive oil along with the butter to cook down the vegetables.
(Trying to save calories where I can).

Once again, I am sorry this is so late.......but better late than never!

For the garnish: (don't skip this! I have spoken!)

Heat 4 tablespoons of butter in a large heavy pot over medium.

Reduce heat to low, cover, and cook, stirring occasionally and reducing heat if needed, until vegetables are soft but not browned and have released their moisture, about 45 minutes (this will give them deep flavor). 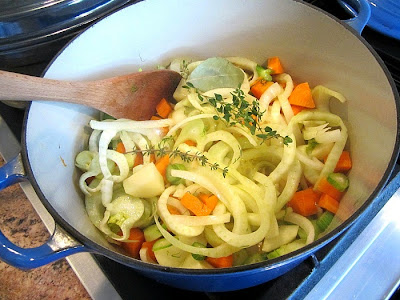 Working in batches, purée in a blender or with a hand immersion blender until smooth. Strain into a clean pot; season with salt and pepper.

Heat remaining 2 Tbsp. butter in a small saucepan over medium. Add chestnuts and cook, stirring often, until butter is browned and chestnuts are toasted, about 2 minutes.

Mix the creme fraiche w/ the maple syrup in a small bowl. 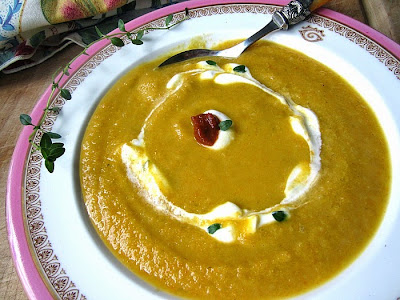 The second day I had it for lunch with Greek yogurt and harissa on top. So good.

Enjoy and have a wonderful Thanksgiving!

lisa is cooking said…
The creme fraiche and chestnut topping look great. I'll happily use chestnuts all through the winter! Hope you have a lovely Thanksgiving!
November 25, 2014 at 2:51 PM

Natalia said…
I'm loving all the recipes that call for fennel, a vegetable that I've started using more of lately. Although I won't be having this for Thanksgiving, I plan on making it next week. Sounds delicious!
November 25, 2014 at 9:11 PM