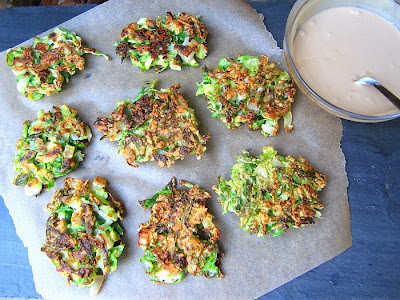 It's two for one day.

Did you know that Hanukkah and Thanksgiving fall on the same day this year?
I overheard a woman talking in the supermarket referring to it as "Thankgivukkah". This is news to me.

Why not celebrate the double holiday with some Brussels sprouts latkes?

I never make potato latkes as lacy crisp and delicious as my grandmother did, so I don't bother trying.
Instead I make cauliflower, Swiss chard, carrot or butternut squash pancakes, anything to avoid the potato.

Here, I took Molly Yeh's idea, and fried up some Brussels sprouts to make these delicious, lacy, crispy fritters.

You will not miss the potatoes here! They were that good!

If you can't find chickpea flour, go ahead and use regular all purpose flour, they just won't be gluten free.

Tip 2: Try to make the sprouts as shredded as possible. The large pieces will only make the latkes fall apart.

Tip 3: I hope by now you own a thin metal fish spatula, it makes flipping fritters, crab cakes and any fish fillet a pleasure. 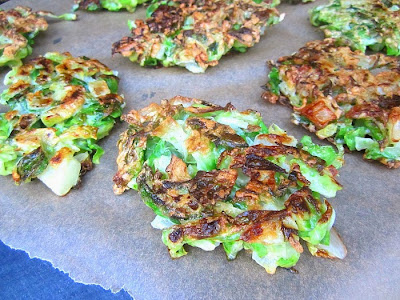 In a large bowl, mix together the shredded sprouts, lemon juice, zest, onion and egg whites. (To separate the whites from the yolks, just use the halved egg shell as a cup and toss the yolk back and forth over the bowl to remove the whites. I hate to throw away the yolks, but I never have reason to use them). :( 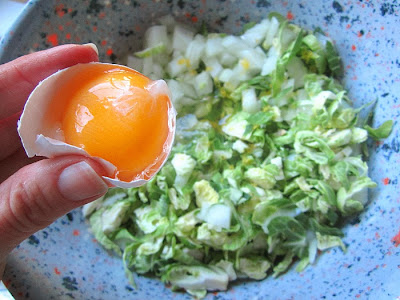 Add in the flour and about 4 big pinches of kosher salt and a few grinds of pepper and cumin.

In a large heavy skillet, heat some frying oil (canola, peanut or vegetable), about 1/4 cup.

Plop in 4 large serving spoonfuls and gently pat down with the back of the spoon. They may look like they are going to fall apart, but I promise they won't. 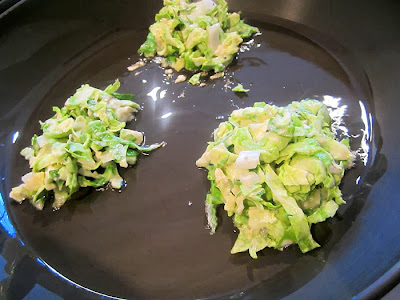 Fry on each side for 1 minute 30 seconds, they will be nice and crisp.

Transfer to a paper towel lined platter to blot. 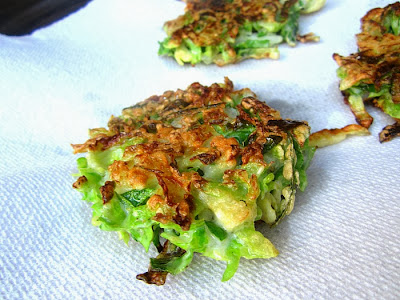 Serve with the Balsamic Dijon cream on the side.

I froze half the batch, so I will let you know what happens! 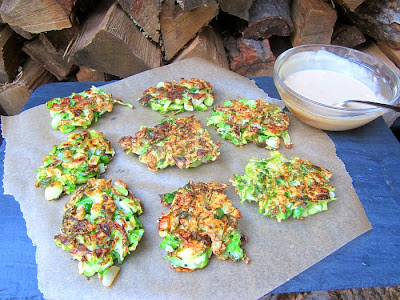 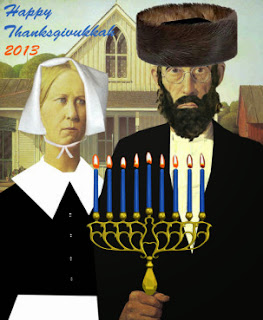 Anonymous said…
It's only the Monday BEFORE Thanksgiving and I'm already done with food. Molly Yeh's as cute as our 6 week old kitten and that's pretty darn cute. Her bubbly adorability also makes me feel about 1,476 creaky years old. Can I count on your for cat raising tips, Ms. Snacks? I bet you were a perfect mommy to your girl Shasta and I need all the help I can get...time to clean the three training litter boxes (sigh) and scoot to Trader Joe's.
November 25, 2013 at 10:01 AM

Anonymous said…
I love your fritter recipes because it gets me to eat my vegetables in the most delicious manner.
November 25, 2013 at 2:47 PM

Proud Italian Cook said…
I love brussel sprouts but you really got me with the balsamic sour cream sauce, that sounds so good together!
Happy Thanksgiving/ Hanukkah my friend!
November 25, 2013 at 6:44 PM

Laura in Texas said…
I hope you can help. I am on a vegan diet. No dairy at all, no coojing oils of any sort.

I got excited when I saw the latke post today. Then I saw egg and oil. Do you know of any recipes without these things?
November 26, 2013 at 9:30 AM

Bites from life with the barking lot said…
Cumin with these fritters...hmmm. and your egg yolks look brighter than what my chickens are giving. I loved that photograph! Must get a fish flipper for my trout cakes! I'd love to try these.
November 26, 2013 at 10:11 AM

Robin said…
I made these last night, so easy, and the kiddies loved them!
We dipped them in soy sauce instead of the cream, and we loved them!
Thanks Stacy!
November 26, 2013 at 11:27 AM

Karen (Back Road Journal) said…
The Brussels sprout latkes sound so good and different. Have a wonderful day of celebration.
November 27, 2013 at 4:14 PM