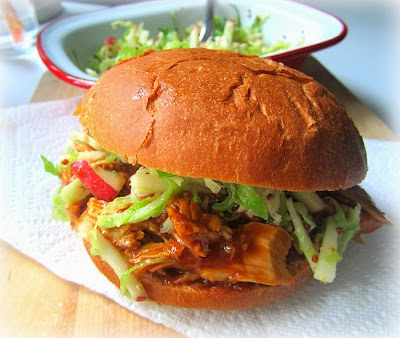 I was trying out this recipe for mini BBQ pulled chicken sandwiches to serve at a Sunday football party, and needed a cole slaw to go on top.

I did not want to serve a mayo based slaw, since it's no longer summer and I just wasn't in the mood.

I thought this recipe for an apple and Brussels slaw would pair perfectly with the pulled chicken.

This was very light, fresh and crisp. I even ate it for lunch as a salad.

Since I picked my own apples, there was no need to peel them, and I like the look of the red color in the slaw anyway.

It was the perfect combination and everyone loved it with the sammies! 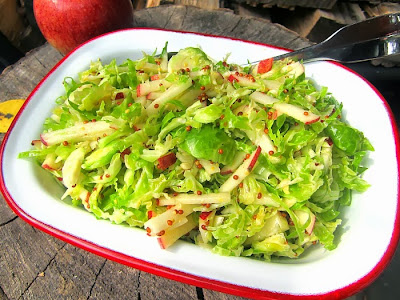 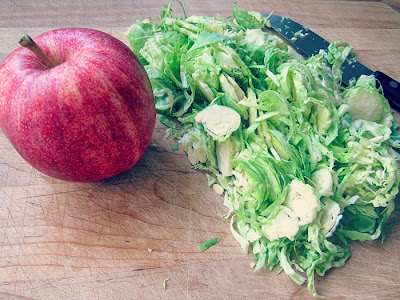 Trim the ends and outer leaves off the sprouts and slice them into slivers.

Julienne the apple and mix with the sprouts.

Whisk the dressing ingredients with a fork and pour over salad.
Taste for seasonings and season w/ salt & pepper.

For the Pulled Chicken: (adapted from Dinner a Love Story) 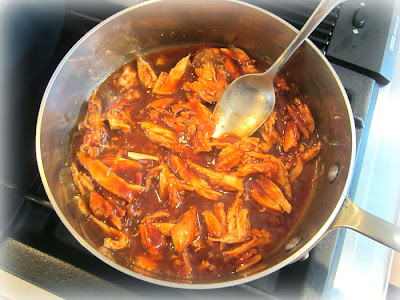 Bring to a boil, then reduce heat and simmer until chicken is cooked through, about 15-20 minutes. Remove the chicken from the pot and shred with two forks, like you would if you were making pulled pork.

Place the chicken back in the pot with the sauce and simmer a minute or two.

Place some of the BBQ pulled chicken on the open rolls and top with the apple slaw. 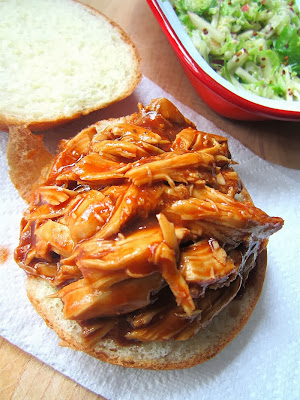 Content in a Cottage said…
That slaw sounds delicious. You are so creative. Beautiful sandwiches with lots of flavor and crunch. Yum.
October 22, 2013 at 7:41 AM

Ciao Chow Linda said…
I like the look of that red apple in there too Stacey. I love the combo of the slaw and the chicken - something I would never have made if it weren't for seeing it on your blog today.
October 22, 2013 at 8:27 PM