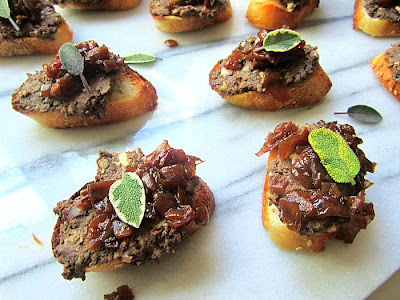 My first order of business today is to wish my editor, a.k.a. "Mil" in the comment section (my mother-in-law!!), a very happy 85th birthday!
She gets paid very low wages for correcting my spelling errors before I even wake up in the morning.

Second order of business this a.m. is the perfect appetizer for Rosh Hashanah (the Jewish New Year 5774), which begins sundown, Wed. Sept. 4.

Pâté and liver spread is always in season, though I only seem to make it during the Jewish holidays. Though, we frequently order it on crostini in Italian restaurants all year long, also known as crostini di fegato or crostini Toscana.

It seems that Italians use liquor in their recipe: Port, Marsala, Vin Santo, etc.
Also sage is often used, as are garlic and shallots.
Butter is used in Venetian recipes (using calves liver).

It all sounds good to me.

Jewish style chicken liver is made sans alcohol and never butter, but instead, with a ton of sauteed onions for sweetness, chopped hard boiled eggs and SCHMALTZ baby! (chicken fat).

I am obsessed with the cookbook POLPO and decided to make the author's recipe for Venetian Chicken Liver Crostini.

This book is filled with 140 simple recipes of mostly 6 ingredients total.
Lots of little snacks (cichetti) and easy dishes from Venice, the author's favorite place on earth.

Russell Norman, a Brit, who worked as a corporate chef, was obsessed with Venice and the little cafes where the locals went for a glass of vino and an appetizer before going home for dinner. He quit his day job and studied the cuisine and traditions of Venice and decided to open a restaurant in the Soho district of London called POLPO.

The rest is history.

This is his version of Chopped Chicken Liver, and it was excellent! 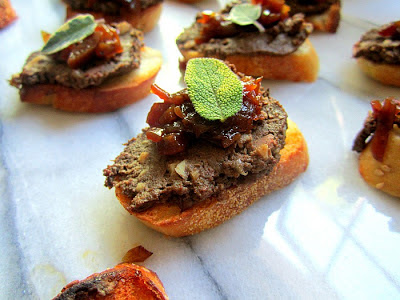 Clean the livers, by cutting off the little gross membrane (the stringy stuff) and set aside. 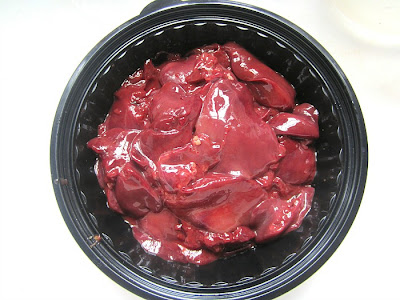 In a heavy skillet, heat about 1/4 cup of olive oil and saute the sliced shallots on low heat until soft and golden. 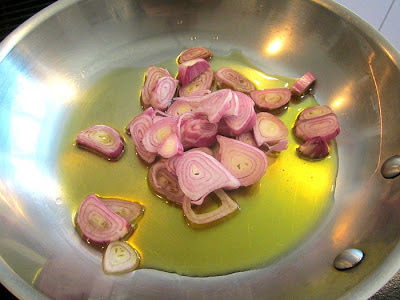 Remove the shallots to a bowl and add the chicken livers to the pan.

Turn the heat up and cook the livers until brown on all sides, but still a little pink inside (about 7 minutes or so).
During the last minute of cooking, splash with a few tablespoons of Port or Madeira. 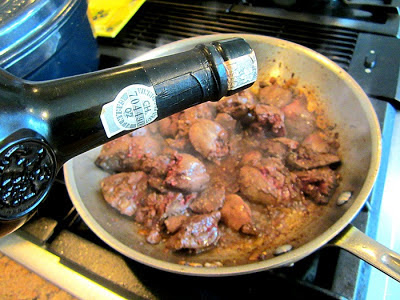 Add the liver to the bowl of shallots and throw in the 2 hard boiled eggs.

With a potato masher, mash the ingredients to the consistency you like. If the liver looks a little dry, add in some extra olive oil. 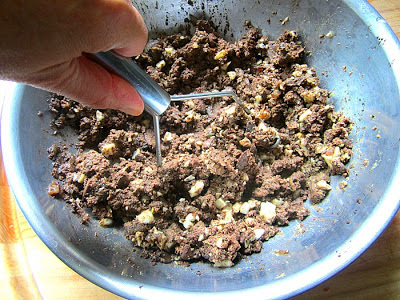 I make my chopped liver the day before and keep it refrigerated.

When ready, spread on toasted bread and top with some sage leaves.

To gild the lily, I topped my crostini with balsamic onions (recipe can be found here). 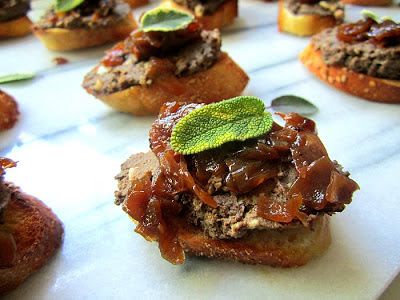 How funny, a mother in law and a liver post all in one day.
I love them both!

Have a happy and healthy Jewish New Year 5774 and Happy Birthday Mil.

Anonymous said…
A very happy birthday to you, Mil! You and Ms. Snacks are two lucky ladies - the love you share as Mil & Dil is rare and special. Hope you get to nibble some of these fabulous crostini today, together.
August 28, 2013 at 9:13 AM

SarahB said…
Happy Birthday MIL! I love reading your comments. I'll let you have the share the title of "Stacey's biggest fan" (along with Henry, of course) if I can be the runner up!
August 28, 2013 at 9:49 AM

Thank you for your lovely birthday wishes. My employment all these years has been a learnng experience for sure. If I only had the patience to follow all your delicious recipes your FIL would be a very happy man. Your husband is one lucky fellow and so are we to have you as our DIL.
with love,
Mil
August 28, 2013 at 10:06 AM

Ciao Chow Linda said…
Your MIL's comments always shine with the love she has for you Stacey, and vice-versa as you talk about her in this post. Happy Birthday to her. And I love how you made these crostini, complete with the beautiful variegated sage leaf on top. I could eat a dozen of these.
August 28, 2013 at 10:24 AM

Carol said…
Happy Birthday MIL.
I always wondered who Mil was, thought it was a lady named Milicent. How funny. duh.

Debby said…
Stacey and Mil: Let the celebration begin. Your love and caring for one another is a gift in it self that extends to Henry. Debby in Tacoma
August 28, 2013 at 12:11 PM

Bites from life with the barking lot said…
Happy Birthday Mil...and happy holidays Stacey! I adore chopped liver....this one looks good too. PS I can't spell....think I could be adopted?
August 29, 2013 at 8:38 AM

Christine said…
Happy B-day to Mil! Love liver, so will be adding this to my rotation. This summer, dinners of small cold "smorgasbord" items have been helping beat the heat (currently in the 100's for over 2 weeks). This is a perfect addition. Quick question, if you have a minute: tawny or ruby port? I'm guessing tawny but don't want to waste a batch of chicken livers. Thanks!
August 29, 2013 at 10:56 PM