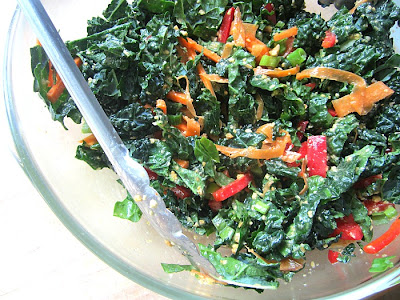 Just in time for summer is this fantastic cole slaw made w/ raw kale instead of cabbage.

The peanut dressing is delicious.
This stuff is addictive.

The only thing I added were the green onions.

I am giving you the original recipe, however, I cut it in half, using only 1 bunch of kale and half the dressing, to serve 4 people. It makes a lot of slaw. 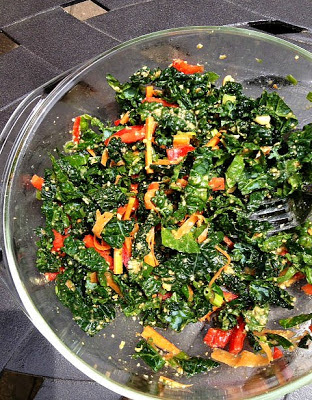 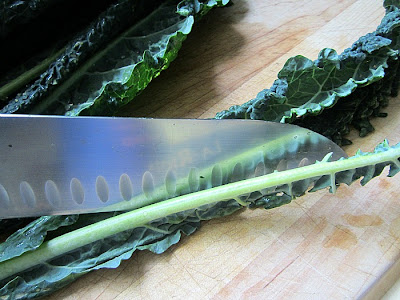 Toss the kale with the sliced bell peppers. Slice the carrot very thin, either by creating curls with a peeler, or by running the halved carrot lengthwise down a mandoline. Toss with the kale, green onions, red pepper, and 1/4 cup of chopped peanuts. 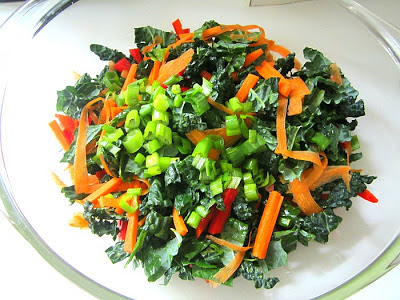 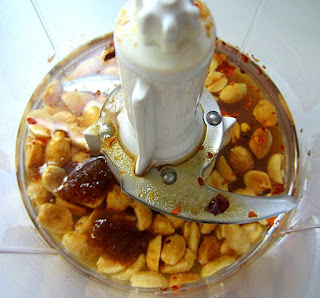 Pulse it just a few times; the peanuts should be partially pureed, but with some nibs and nubs still left in the dressing. (The texture difference between the whole peanuts, ground peanuts, and pureed peanuts in the sauce is one of the things that makes this slaw so wonderful.)

Toss the dressing with the slaw and let it sit for at least a few minutes before serving. 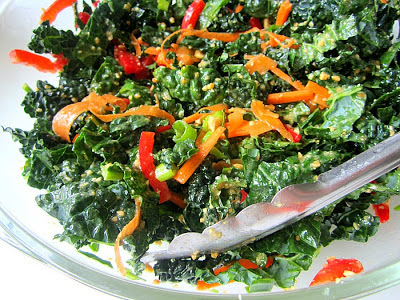 Anonymous said…
Keep whipping up fabulous recipes with the most fashionable of vegetables (kale) and you will be, for sure, bikini ready for Jersey Shore fun this summer!!! Pix please, Ms. Snacks. ;o)
June 21, 2013 at 1:26 PM

Erin said…
Yum!! I have been looking for a new kale recipe for this week's CSA bounty. This sounds like just the thing for dinner tonight!!
June 21, 2013 at 2:59 PM

tasteofbeirut said…
yum! got to say i was turned off by kale after trying kale chips plus it is not sold here in Beirut but we grown chard and I have a bunch laying around to use; this would be a perfect recipe to try. thanks.
June 22, 2013 at 2:46 AM

Bites from life with the barking lot said…
This looks so good! I like the idea of the green onions with the peanut dressing.
June 22, 2013 at 8:02 AM

Joanne said…
Peanut dressing is always a pretty sure-fire way to lure me into slaw making. This sounds great!
June 23, 2013 at 7:50 AM

Anonymous said…
tasteofbeirut, yours must be the only place the now-trendy kale has not shown up. It is absolutely everywhere here. Ubiquitous would be an understatement.

Had a really crummy kale salad at a local restaurant of good repute. Blah. Yours sounds very interesting - it must have a tasty dressing and other ingredients, not just kale. So I'll probably cut the recipe even smaller and make some for myself. I have gotten my husband to eat broccoli and other vegetables after a lifetime of being a vegetable-hater. Don't want to push my luck.