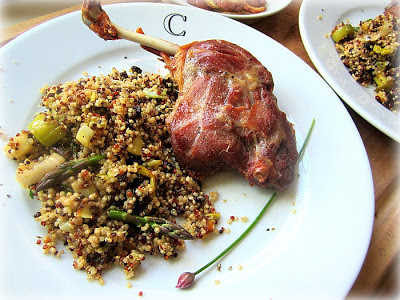 This is one of those dinners that I just made up as I went along.

What did I have in the freezer?
2 duck legs confit from Dickson's Farmstand Meats in NYC (the BEST).

What's in the vegetable bin in the fridge waiting to die?
A couple of asparagus spears, and a few homegrown leeks.

Since the duck is already cooked and preserved in duck fat, this was a no brainer.

I made a delicious quinoa salad w/ the roasted vegetables and added currants for sweetness.

At the end I drizzled a little melted duck fat over everything for good luck.

And of course I cooked a bunch of sliced potatoes in the pan with the duck, so we could have duck fat potatoes.
I had to.

This was so good.

You will like the quinoa salad on its own, with or without the duck. 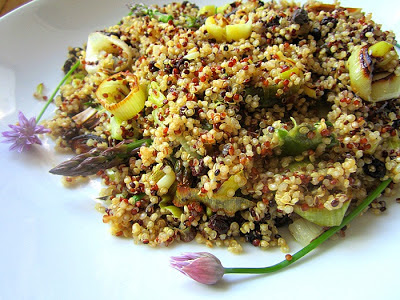 Toast the quinoa in a big saucepan until fragrant, then add the water.
Bring to a boil and turn the heat down to a simmer until the liquid is absorbed. About 15 minutes.

Add the currants in with the quinoa and season w/ salt and pepper.

Meanwhile, lay out the sliced leeks and asparagus on a baking sheet and drizzle w/ olive oil and sprinkle w/ kosher salt. 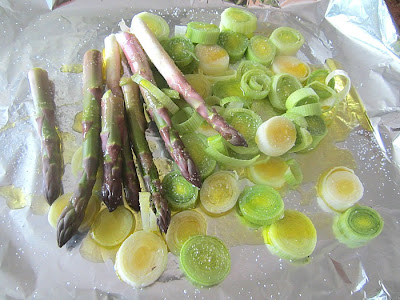 Roast in a 400F oven for about 20 minutes, shaking the pan after 10 minutes or so.
Slice the roasted asparagus into 2" pieces and add them with the roasted leeks to the quinoa in the pot.

For the duck legs: 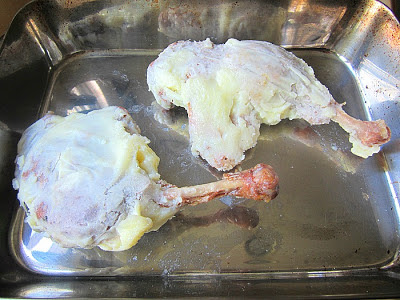 Lay the duck with the preserved fat in a baking pan and bake in the same 400F oven for 15-20 minutes until skin is crispy.
Don't forget to add thin sliced potatoes to the pan too, because they are the best part of the meal.

Serve the duck legs on the quinoa salad and enjoy. 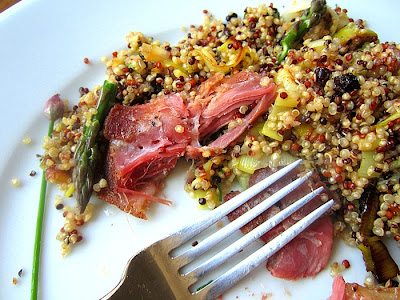 Janice said…
Dear god I am salivating! And the best part of this post: "because I had to"! I depend on my freezer and pantry a lot, but never considered the duck confit. Brilliant! I will give you props when I do it.
June 12, 2013 at 11:11 PM

Anneli (Delicieux_fr) said…
Lovely! I adore confit de canard - it's nice to see it served with some quinoa. I bet it soaks up those ducky juices perfectly. Mmmm yum.
June 15, 2013 at 4:00 AM