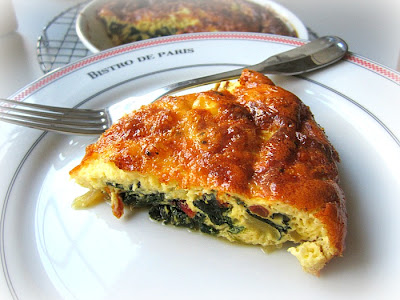 The tart queen hasn't made an appearance on this blog in a while.
She can't afford the calories with all the previous month's festivities.

I forgot about my crustless spinach pie recipe from years ago (I can't keep track of all my recipes, I really should start a food blog), and decided to use Swiss chard instead.

This is excellent for a weeknight dinner with some homemade lentil soup, and is also great cold the next day. There is no crust, so no soggy mess when reheated either.

Go for the heavy cream in this recipe instead of milk, you are saving calories with not using a crust.

You can play around and use whatever cheese you like, Swiss, Cheddar, Gruyere or Parmesan.

It's your quiche, you can do with it what you like!

1 bunch of Swiss chard, cut up, most of the tough stems removed
1 large onion, sliced
4 eggs
3/4 cup of heavy cream (it's better than milk in a quiche, trust me)
salt & pepper
1/2 cup of Gruyere cheese (or your favorite cheese)

Butter a 9" pie plate. Smear the butter on the plate well, so the quiche doesn't stick.

Mix the eggs and cream in a measuring cup with a fork to make the custard. Season w/ salt and pepper and set aside.

In a large skillet, heat up some olive oil and saute the onions until softening. Add the Swiss chard pieces into the skillet and cook until wilted. Season salt. 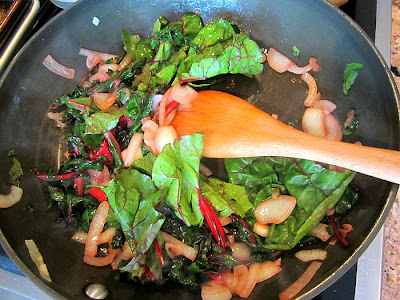 Add the chard onion mixture to the buttered pie plate and grate the cheese on top of this mixture. 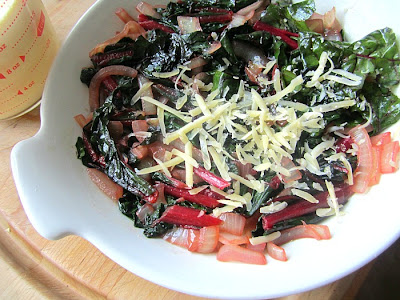 Carefully pour the custard over everything in the pie dish and bake for 40-45 minutes in a 350F oven.

It will puff up like a souffle when it's done, then deflate (sort of like me once a month). 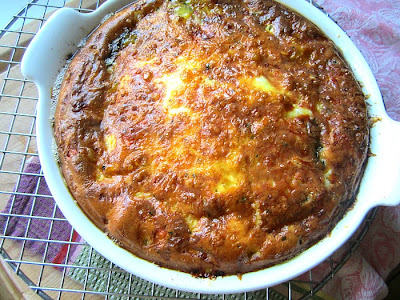