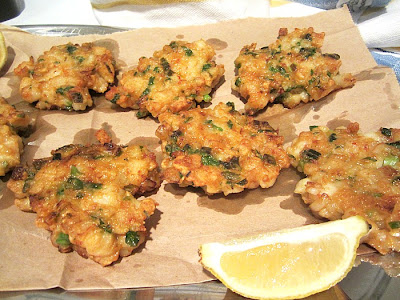 I'm on a fritter kick, in case you haven't noticed.

I won't be making latkes tomorrow for the first night of Hanukkah, but instead am offering up this Spanish tapa from the South of Spain.

Tortillitas de Camarones. Little shrimp fritters.
(shrimp is not traditionally a Jewish holiday food, in fact, it's probably banned from all Jewish holidays!).

I saw this recipe in Saveur magazine this month and my mouth was watering, but I questioned the lack of an egg in the recipe. Don't most fritters bind with eggs? 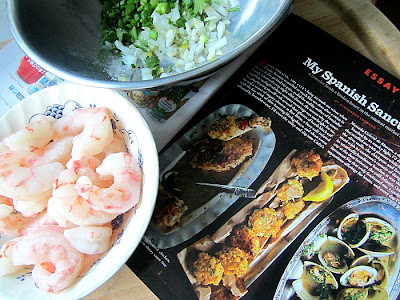 I consulted some Spanish websites and some use an egg, and some don't. So I followed the recipe, except I subtituted cilantro for the parsley for a bit more flavor.

I could not find chickpea flour, who can really? so I ground up some dried chickpeas to make some chickpea "flour" and these were amazing.

I only got 8 fritters out of the recipe, but it was enough for the 2 of us. 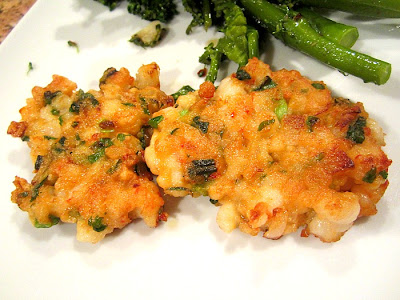 olive oil
1/2 small yellow onion, finely chopped
12 oz. raw shrimp, peeled, deveined and finely chopped
2 tbsp of chopped parsley or cilantro
1/4 cup of chickpea flour (hard to find, so you can grind some dried chickpeas, and voila, you have chickpea flour, or you can use regular flour)
2 tbsp of all purpose flour
1 tsp baking powder
1 tsp of pimenton (smoked Spanish paprika, don't use sweet)
kosher salt & black pepper
I added a handful of chopped scallions too
4-5 tbsp of water

Saute the chopped onions in olive oil until softened, about 5 minutes. Transfer the cooked onions to a bowl and add the shrimp, both flours, the parsley, baking powder, pimenton salt and the water. Stir to combine. Let batter rest for 10 minutes. 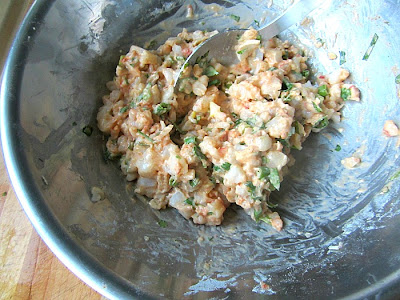 Heat more olive oil in the bottom of a nonstick skillet and drop in about 4 tablespoons of batter (for 4 fritters), and cook until golden on both sides. About 3 minutes total. 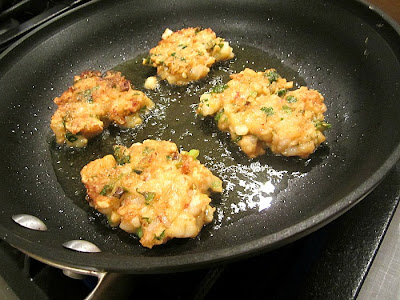 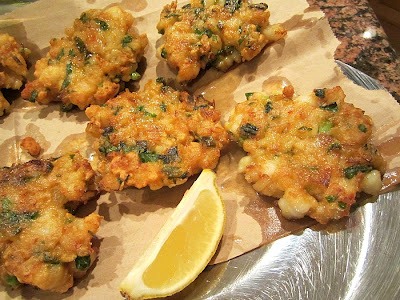 Susan..... said…
Happy Hanukkah Stacey.
If people can find the boxed falafel mix, usually in with the matzoh mix, etc., they can use that because it contains chickpea flour and spices which would work real well with this recipe. I use this mix when I make a baked "fried" item.
December 7, 2012 at 10:50 AM

Unknown said…
This comment has been removed by a blog administrator.
December 7, 2012 at 11:58 AM

Barbara said…
Hi Stacey,
Chickpea flour, also called Besan, is available in all Indian Food Stores.
Your photo's are great and I look forward to making these.
December 8, 2012 at 5:41 AM

lostsoulhelpmejebus said…
I just finished reading that recipe in my copy of Saveur, what a coincidence! Will try your adaptation, thanks for sharing! ;-)
December 9, 2012 at 5:15 PM

angiemanzi said…
Stacey, I have found chickpea flour in my Natural health food store under garbanzo flour if that helps. BTW i love love your blog
December 10, 2012 at 10:34 AM

Oui Chef said…
These look pretty special, but I too am surprised they held together without egg. Go figure.
December 12, 2012 at 8:59 AM