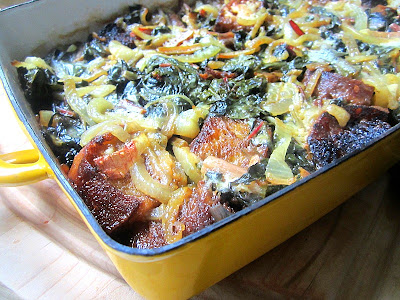 Swiss chard is taking over the garden, 'tis that time of year.

My favorite way to use it is in a torte aux blettes (or torta bieta in Italian), but I've done that for you before, so it's time for a panade.

What the heck is a panade (pronounced Pa-NAHD) anyway?

When I looked up the definition, the answer was "a paste made of bread boiled in water, could also be made with rice or potatoes". Huh? What do you use it for, wallpaper?

It's a lovely word (as most French words are), but this recipe seems more like a bread pudding or gratin to me.

To get off track for a minute, I think the best thing I ate in Paris last year was a Swiss Chard Gratin. What a wonderful night to stumble into an old French restaurant with no English speaking patrons late at night, starving, a bit intimidated, but a warm and welcoming maitre d' brought us champagne and recommended the Swiss Chard Gratin (La Tour D'Argent turned us away, we were not even allowed to peak inside.....their loss!).

A creamy, piping hot casserole came out with Swiss Chard, cream and Gruyere in a bechamel sauce w/ burnt edges & a hint of nutmeg. It was so rich and delicious, I couldn't stop eating it.

Now back to the Swiss Chard PANADE.

I visited an old cookbook, which I rarely use, not sure why. Judy Rodgers' book Zuni Cafe won a James Beard Award, but I just never put it in the rotation.

I was inspired by her recipe for Swiss Chard Panade, but made mine more like a gratin, using far less stock than she does.

I didn't want mine soupy and mushy like Orangette's came out, so I cut way down on the stock (the original Zuni recipe calls for 4 cups of stock). I didn't want the "paste" effect either, I wanted more of a bread pudding, minus the eggs. The onions provide a lot of moisture, trust me on this one.

I also used grated Pecorino on top, because I didn't have any Gruyere in the fridge, and it was fantastic.

This would be a great recipe for the fall, when you have tons of Swiss Chard in the garden and the weather is turning chilly. 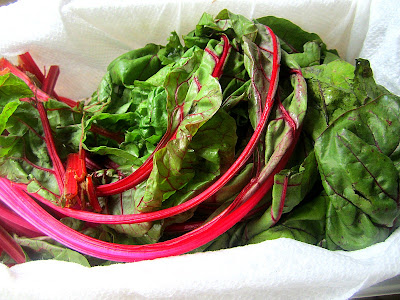 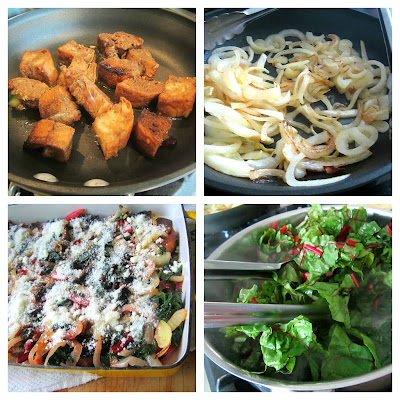 In a heavy skillet, cook the onions in olive oil, sprinkling them w/ kosher salt and cook them on medium for about 15 minutes, make sure you don't brown them.

In another pan, heat some more olive oil and toast up the bread cubes, sort of making nice croutons. I do mine in a nonstick skillet.

Using a third pan, (or being thrifty and reusing one of the pans like I did!), heat some oil w/ garlic and saute the Swiss chard for about 3 minutes, until wilted and the garlic is fragrant. Season with kosher salt & pepper. Splash with red wine vinegar at the end of cooking (this is my addition and it's so good).

Drizzle some more olive oil into a casserole dish and lay the toasted bread cubes on the bottom.

Add in the cooked chard and onions and distribute nicely. Sprinkle with whatever cheese you are using, and carefully pour chicken stock around. 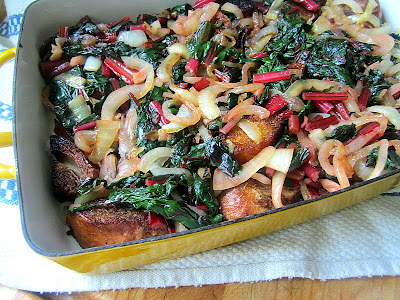 You can make this ahead and place in the fridge at this point until ready to bake.

When ready to bake, preheat oven to 325F and cover panade w/ foil.

Bake for about an hour.
Let rest 10 minutes before serving. 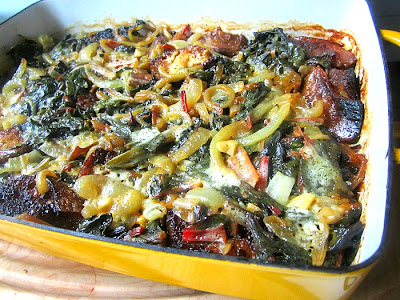 Joan Nova said…
I had to come over from FB to see exactly what a panade was. It's even more delicious than I first thought.
August 27, 2012 at 9:44 AM

Susan..... said…
The panade I am familiar with is the Italian trick to soak bread in water or milk for use to moisten meatballs or meatloaf. You can also add processed carrots and onions, cooked to caramelize, and then added to the soaked bread. I think it means "to pound", like a mortar & pestle pound.
Much better description than paste I think. I didn't grow Swiss chard this year, now I am sorry looking at this.
August 27, 2012 at 1:49 PM

Joanne said…
That is a GORGEOUS dish! I've always kind of thought of panade as more bread pudding than anything else, so we're in agreement on this one!
August 27, 2012 at 10:01 PM

Roz | La Bella Vita Cucina said…
I've got ruby red stemmed swiss chard going crazy in the garden too right now. My family uses it mostly for making ravioli stuffing mixed with spinach! Pretty vegetable too in your panade!
August 28, 2012 at 5:14 AM

Christine said…
This looks so good! I've marked it on my "to-make" list so I don't forget. I love finding out about new dishes and techniques I'm not familiar with, thank you!
August 28, 2012 at 11:00 PM

LynnieBNC said…
I suspect some nice crispy bacon might add a nice flavor, as well? This looks and sounds fantastic!
August 29, 2012 at 9:58 AM

Anneli (Delicieux_fr) said…
Hi Stacey,
I can't see an email address for you on your site so I will leave this as a comment and hope you get back to me... I am making this dish tonight at home and if it works out, I would like to post it to the blog challenge - 'Bookmarked Recipes' on Tinned Tomatoes. I may slightly change the recipe but I would credit you if I do post it with a link of course... Would this be ok with you? Always nice to ask a fellow bloggers permission first I think :) Can you please let me know. Thanks - Anneli