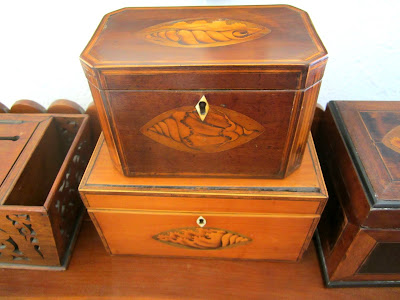 One of my first obsessions with antiques was collecting tea caddies. 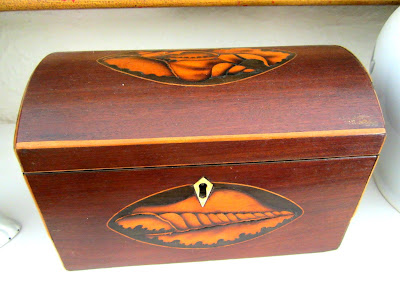 The tea caddy played an important role in British households back in the 18th and 19th centuries.

Tea was imported from China to England in the 1600's for it's medicinal as well as pleasurable uses. It became as expensive and as rare as opium!

Well-to-do households back then, kept their tea leaves under lock and key.

The first examples of tea caddies were porcelain and in the shape of bottles, but later in the 19th century, cabinet makers started producing wooden caddies with drawers inside to store the precious tea. 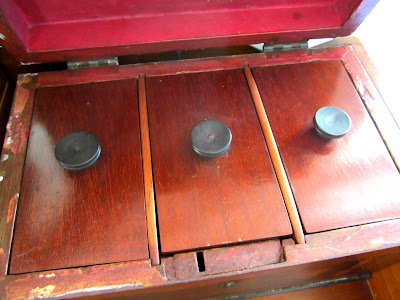 All of the boxes that I collect, are of the Georgian period (George III, c.1820) and have inlaid conch shells and ivory escutcheons (key holes) on them. 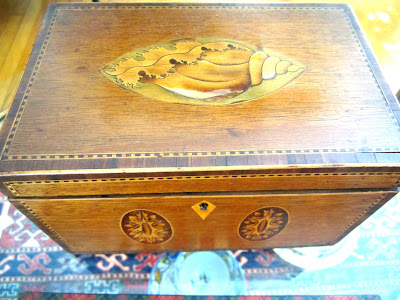 They are not easy to find anymore in the U.S. Once in a while, I see a nice example on ebay, but I rarely find them in a shop. They are more popular in England than over here.

Here is a nice article on the history of the tea caddy, with a lot of great photos. 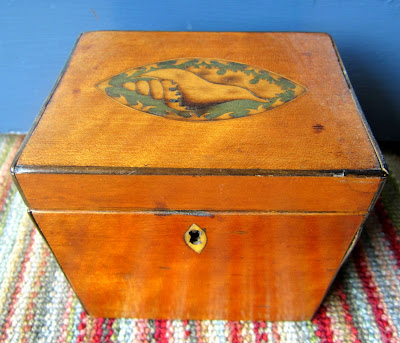 By the way, it's funny how much I love these tea caddies, since I HATE TEA!
I am a coffee drinker, and will never acquire the taste for a hot cup of tea. Sorry.

Sam Hoffer / My Carolina Kitchen said…
How pretty. I don't think I've ever seen a tea caddie. I'm not a tea drinker either. Love my coffee.

Ciao Chow Linda said…
Never say never missy. these tea caddies are a treasure - a bit of history come alive. i am a coffee AND tea drinker. i think I need one of those caddies.
May 18, 2012 at 9:06 AM

Anonymous said…
Nice! My favorite is the big plain boxy one in the last photo. What's the significance of the conch shells? Gonna look that up. I gave up coffee 3 years ago - my stomach couldn't take it anymore. I REALLY miss it - only drank 1 a day but enjoyed it so. I was just rethinking my abstinence - article in today's NYT about it's health benefits. Tazo's AWAKE is my substitute. I love tea too, but it just can't pack the punch of a good cuppa coffee.
May 18, 2012 at 10:26 AM

Stacey Snacks said…
Good question regarding the conch shells. Not really sure why they were a popular motif on furniture in the 19th century. I love shells, so that's why I am attracted to caddies w/ the inlay.
May 18, 2012 at 10:33 AM

Love those. You don't need to be a tea drinker to appreciate how beautiful those boxes are! BTW, studies show that drinking coffee, and I guess some teas, too, is good for your health!
May 18, 2012 at 1:38 PM

Melbourne Girl said…
These are lovely. I see tea caddies sometimes in some of our antique shops, but not many. Becoming very rare.
I do have an old cutlery canteen though. Do you have any in your collections?
Lesley
May 18, 2012 at 8:50 PM

Melbourne Girl said…
I love this antique collections series you're doing by the way. It's lovely

Lisa Winkler said…
Nice! I'm not much of a tea drinker except for iced in the summer- my parents have tea it seems after lunch an dinner every day, as well as afternoon snack!
May 19, 2012 at 7:38 AM

Proud Italian Cook said…
Beautiful caddies Stace! I'm afraid I don't drink tea either, except when I'm sick or eating dinner in a Chinese restaurant.
May 19, 2012 at 9:23 AM