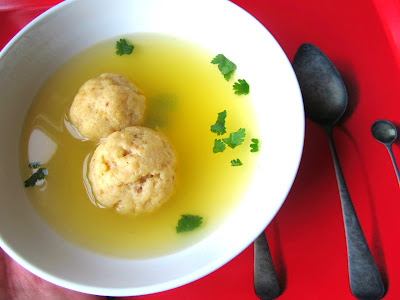 Growing up, my dad always told us his mother (my paternal grandmother Irene), made the BEST matzoh balls. Legend was that they were as big as baseballs and her secret ingredient was a little streak of cinnamon in the middle.

Since I never did get to try them, I had to vote for my maternal grandmother Dorothy's matzoh balls being the best (or kneidlach in Yiddish).

The funny thing was years later, when Dorothy was gone, I found out that they were made from a Manischewitz mix in a box. Oh well.

I have tried matzoh balls that were heavy like lead and ones that were light and pillowy, it's a personal choice, and each matzoh ball recipe is unique.
You are going for an airy dumpling here, don't be heavy handed, I was told.

Here I attempted to make my own legendary matzoh balls along w/ homemade chicken soup for Passover. Bittman's recipe, using a grated onion made these balls the best we have ever tried.

You be the judge. 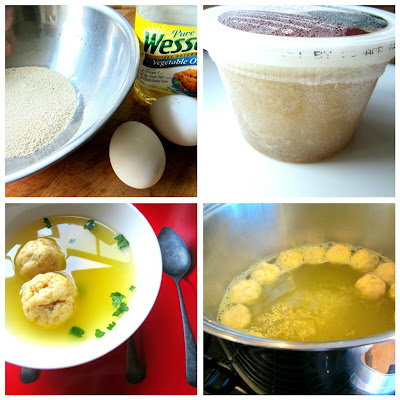 Mix all ingredients together with a fork. Cover and allow the mixture to rest in the fridge for at least 4 hours.

With wet hands, shape into small balls about the size of 1" ping pong balls (they will triple in size when you cook them in the soup). 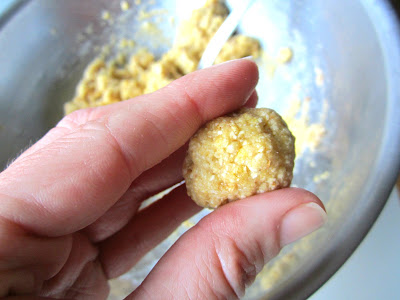 Cook in simmering soup or salted water for 30 minutes or until the dumplings float to the top.

Since I had my surplus of homemade chicken stock from the winter, this was easy!
I added cilantro at the end for an unconventional version of chicken soup, but feel free to add some fresh parsley or dill (as my grandmother did).

The nice thing about these is that you can make these well in advance.
You can freeze the balls separately (as per Joan Nathan from the NYT) on a cookie sheet, then transfer to a ziploc bag (just plop them in the soup to reheat when ready to serve), or freeze the entire soup with the matzoh balls and defrost.

So the judges have come to a decision (my husband and 7 year old neighbor), and we have a winner! Mine won for the best matzoh balls (though they had nothing to compare them too!). 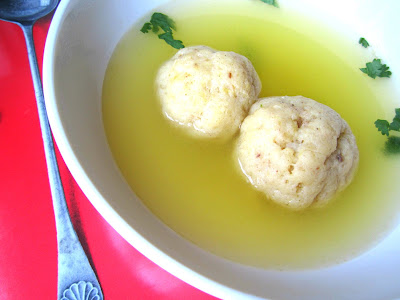 Two balls are better than one. Have a happy Passover.

Foodiewife said…
Matzoh Ball soup is on my recipe bucket list. Whenever I'm in San Francisco, I high tail it to a Jewish Deli that makes the BEST Matzoh Balls soup. I've been reading about making them-- oil vs. chicken fat... sinkers, vs. floaters. I really need to try your version. The look perfect.
April 3, 2012 at 11:26 AM

Dewi said…
Stace, I really want to make this. What's in your chicken stock? Also, do grocery stores normally carry rendered chicken far, or, you do it yourself. Thank you!
April 3, 2012 at 11:34 AM

I had a winter surplus of homemade chicken stock, so used that for my soup.

Anonymous said…
And three is just plain weird. I'm sure your stock and matzoh balls were wonderful, but I would sorely miss the dill. That beautifully flexible green mermaid hair herb, waving lazily in the bowl like sea grass. I think I love the taste, too, but for sure, I know it's GOT to be in there. Happy Passover to you!
April 3, 2012 at 2:31 PM

Melbourne Girl said…
Thank you so much for this recipe Stacey!!!
I first tried this delicious soup in New York a couple of years ago and have made it three times now, but wasn't sure if I was doing it right.
I'm going to make your version and see how I go.
Thanks again
Lesley
April 3, 2012 at 6:56 PM

Joanne said…
Bittman does have a knack for making EVERYTHING majorly delicoius. I'd trust him with my matzoh balls!
April 3, 2012 at 8:59 PM

Ciao Chow Linda said…
These matzo balls are Jewish cousins to the Italian canederli I eat when I'm skiing up in the Alto Adige region of Italy. The Yiddish word sounds like it has a similar derivation. See, we're all related - you're part Italian and I'm part Jewish.
April 3, 2012 at 9:21 PM

Debs @ The Spanish Wok said…
This looks so good. I've never had matzoh balls (not knowlingly anyways) maybe it's time!

You are welcome to join in my food blogger event THE SOUP KITCHEN, here all bloggers are welcome, hope to see you participate soon.
April 5, 2012 at 10:22 AM

Food Jaunts said…
I'll have to give this a shot. I have some matzo meal in the cupboard I bought for a totally unrelated recipe (I think I was crusting something with it?) and this is the perfect way to use some of it up.
April 5, 2012 at 12:30 PM