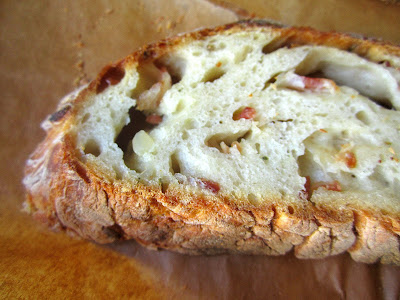 What is lard bread, you ask?

It's this wonderful bread made with pork drippings and only freaking fantastic!!!!!

I used to buy this old school Italian loaf in a Soho bakery years ago, that is no longer in business. They probably died from eating too much lard.

It was the BEST loaf of bread ever, loaded with pancetta and some of the salty fat. Ah, organic and healthy.

Jim Lahey has a recipe for lard bread made with pancetta, but I used good old smoked slab bacon and sauteed onions and rosemary to make this loaf an amazing piece of art.

I like to plan on baking my bread at 9 a.m. on Sunday to have it ready for lunch, so it's nice and warm. I usually start the process on Saturday morning at 9 a.m. to be exact, so 24 hours later we are in business.

By the time you wake up the next morning, this thing is alive. It has tripled in size and wants to escape from the glass bowl. It has a life of its own and wants to get on with it.

I sauteed the bacon pieces with the onions, then cooled and drained them on paper towels.
Mixed them in with the flour, yeast and salt and the baby is on its way. 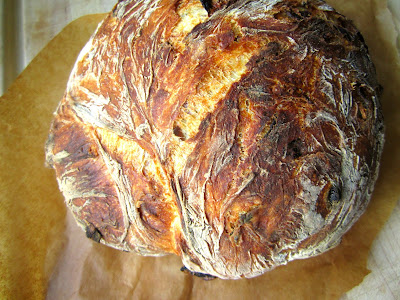 24 hours before you are planning on eating the bread, get started.

Cook the bacon and onions in a large nonstick skillet on medium-low heat for about 10 minutes. Drain and cool the mixture on paper towels.

In a large glass bowl, mix the flour, salt, yeast. Once the bacon onion mixture is cooled, add that with the rosemary to the flour mixture. Add a about a tablespoon of the lard or fat from the pan. 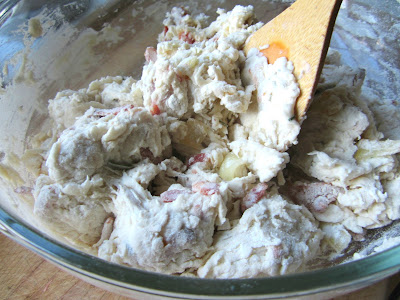 Now add the cool water and mix with your hands to form a nice sticky dough and form into a ball. 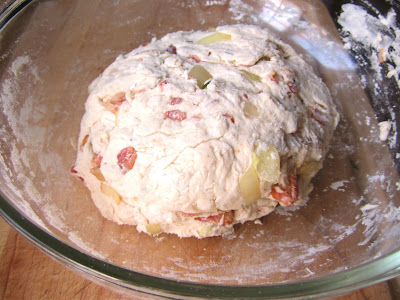 Leave in the glass bowl and cover tightly with plastic wrap and leave on the counter in a cool dry place for about 18 hours (I usually do 24 hours, depending when I wake up in the a.m.).

When you check on it, the dough will have spread in the bowl and doubled in size. 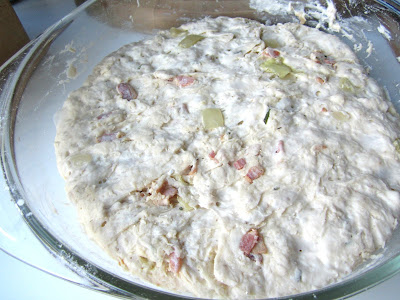 Using a rubber spatula, scrape out the dough onto a floured surface and fold it a few times, turning it over and forming another ball of dough.

Now you are supposed to let it rest in a dishtowel for another hour or two for the second rise, but for some reason, this loaf did not need it.
I put it in the oven almost right away. It was ready to go.

Carefully remove the Dutch oven and lay the dough on a piece of large parchment paper, big enough to slip into the pot. 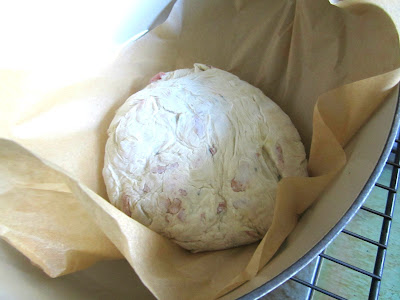 Place the dough and parchment paper into the preheated pot and bake covered for 30 minutes.

Remove the lid, and bake another 10 minutes uncovered until you have a beautiful crust.

Slice into it whenever you like. I never wait for the bread to cool, it's too good. 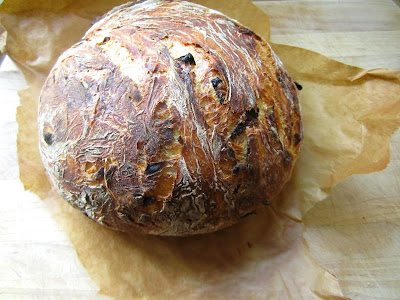 This was my favorite loaf from Lahey's book so far.

It was like an Italian onion roll with little bits of bacon in it.
PERFECT on its own, with butter, or with an egg over easy. 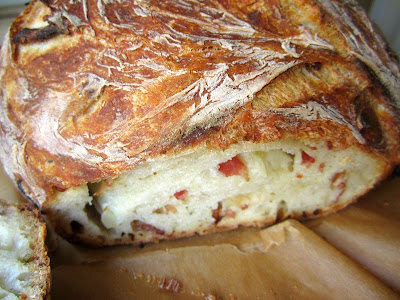 Susan said…
Hi Stacey,
Now THIS bread looks fantastic! And seems easy enough to make. I have a recipe for bacon fat cookies which are great so I can only imagine this bread has an amazing flavor,too! Thanks for sharing!
April 23, 2012 at 8:23 AM

FOODalogue said…
You did a great job. Looks just like the ones found in Italian specialty stores or bakeries.
April 23, 2012 at 9:33 AM

Proud Italian Cook said…
I'm so impressed with your bread making, I shy away from anything with yeast, I might have to take a closer look at that book!
April 23, 2012 at 9:43 AM

Mister Meatball said…
Funny, I have had my "in-house baking team" working on this very item. Apologies for my mimicking this post in the not too terribly distant future.
April 23, 2012 at 9:43 AM

The Short (dis)Order Cook said…
Oh yum! There are a couple of Italian specialty shops near me where my grandmother used to buy lard bread all of the time when she was alive. Every now and then my brother (who lives in her old house) buys it for family occasions, but people are just too afraid for their health to buy it more often. Now you have me craving it. I could go to the store, or I could consider baking it myself when I have the time.
April 23, 2012 at 10:08 AM

Stacey Snacks said…
Deb,
This is my third loaf from Lahey's book (fig walnut, chocolate coconut, and this beauty!). where have you been?
xo Stacey
April 24, 2012 at 8:44 AM

Bites from life with the barking lot said…
I bought his book after your first post because it was so easy, and yes, delicious. I've made your fig bread with the cinnamon several times and it's always fabulous. Can't wait to try this one!
April 24, 2012 at 9:23 AM

n u n u m u said…
I know this is an old post but I just made this bread from the recipe you posted. I am a walking bread baking disaster but this came out delicious and beautiful! Thank you so much!
December 4, 2014 at 6:06 PM