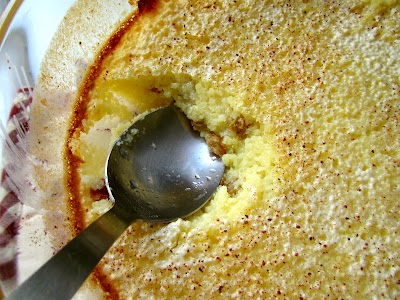 I had a dinner party and realized at 4 pm that I had forgotten about dessert (I told you I have been forgetful lately).

Should I rely on one of the guests to bring dessert? More likely someone will bring a wine that I will use in my next beef stew.

I remembered I had always wanted to try a baked couscous pudding that I had seen somewhere, so I would wing it and work with what I had. This was fast and easy.

This was like a rice pudding, only the couscous gave it a nicer texture.

This was amazing warm out of the oven, but I noticed after dinner, the pudding was no longer creamy and warm, but more of a solid mass (rice pudding does the same thing if left to cool), so I served it w/ a nice jar of poached pears in syrup on top of each portion and everyone loved it. 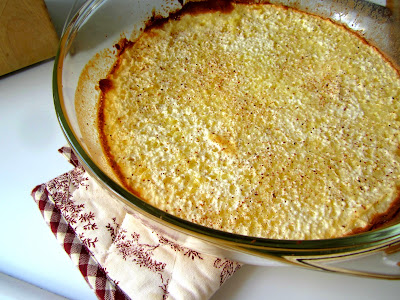 In a heavy saucepan, heat up all the ingredients until they come to a nice rolling boil.
Whisk so the couscous doesn't clump together for about a minute.

Pour into a large 6 cup gratin dish or Pyrex bowl (I love this vintage one with the handles) and sprinkle the top with nutmeg. Bake in a 325F oven for 30-35 minutes, until turning golden and firm.

This is best served 20 minutes out of the oven, but I served it 5 hours later with fruit and syrup and it was great. 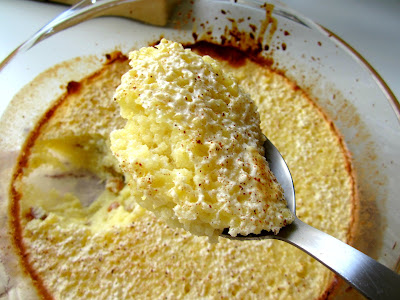 I hope you try it.

Sam Hoffer / My Carolina Kitchen said…
I love couscous and always have some on hand. Never thought of using it in a pudding. Very clever.
Sam
March 26, 2012 at 1:46 PM

Lisa @ Snappy Gourmet said…
Would have never thought about using couscous instead of rice, great idea!
March 26, 2012 at 9:08 PM