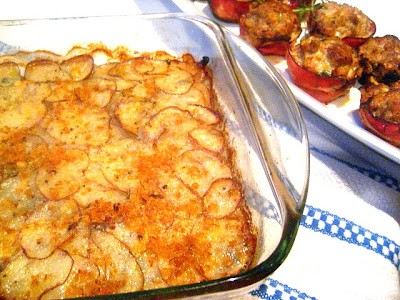 I always make the same tried and true potato gratin for company. It's Ina's recipe with fennel, onions, lots of Gruyere and heavy cream. Since we did enough indulging in 2011, I wanted something lighter for a dinner party and not so rich.

This recipe fit the bill.

Disclaimer: You have to like the assertive flavors of capers and the strong taste of Pecorino Romano (which of course I do!), this is tangy and briny, and probably not for the wimps in the house. 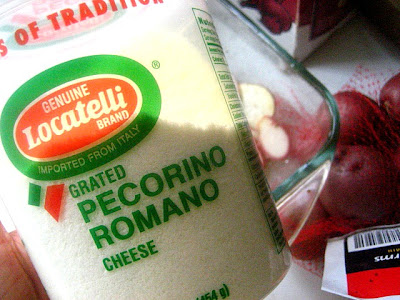 I used red potatoes because that's what I had, but use russet potatoes as the recipe calls for, they will hold up best in a gratin.

In a heavy skillet, cook your onions in olive oil for a few minutes until translucent. Sprinkle w/ kosher salt & pepper.

Rub an 8 x 10 gratin dish (Pyrex or ceramic works best) with the cut side of the halved garlic clove, letting the oil from the garlic coat the dish. Brush the dish w/ a tablespoon of olive oil.

Slice your potatoes super thin (I used a mandolin) and layer them on the bottom of the gratin dish, you don't have to be neat about it. Sprinkle w/ kosher salt & pepper.

Layer 1/2 of the cooked onion mixture on top of the potatoes. Sprinkle w/ a tablespoon of Pecorino Romano and dot w/ a tbsp of capers. 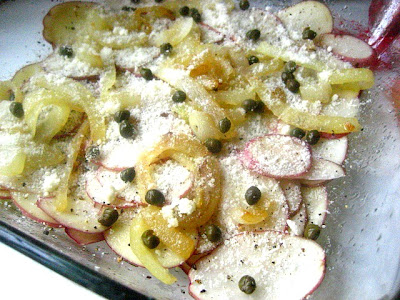 Carefully pour the stock over the potatoes and press mixture down with a spatula so potatoes are absorbed in the liquid.

Cover w/ foil and bake 1 hour in a 350F oven. Uncover and sprinkle w/ a tablespoon of Pecorino and a little more olive oil on top and bake uncovered for another 15 minutes until top is browning and bubbling. 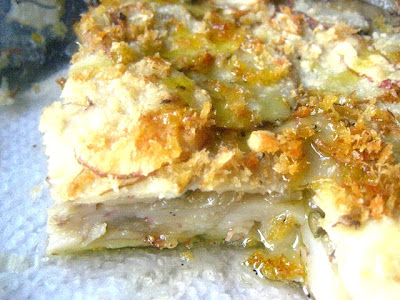 Let rest about 30 minutes before slicing into squares. Even better the second day, so feel free to make this a day ahead! 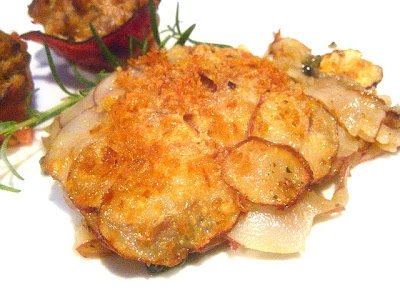 Joanne said…
Having a decadent gratin to serve to guests is a must...but having a lighter one to serve on a more regular basis is a must! love this!
February 2, 2012 at 9:35 PM

Sprigs of Rosemary said…
The wimp I live with will just have to suffer through in the name of "lighter."
February 3, 2012 at 9:43 AM

Dana said…
A potato gratin without tons of cream and cheese? That's the one for me. I love Ina's recipe too but can only have a sliver of it before I slip in to a food coma.
February 4, 2012 at 11:30 AM

Oui, Chef said…
Hey....who are you calling a wimp? I would be all over this dish, love the lightness and the briny bite of the capers and cheese. Sounds divine.
February 4, 2012 at 3:41 PM

LovesAvocado said…
This sounds delicious! I have never made a gratin before. This one sounds yummy! I like that there is no heavy cream.
February 6, 2012 at 10:47 AM