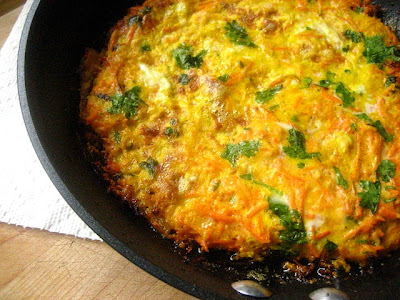 File this one under: "Recipe Rescues".

I made Nigel Slater's recipe for Carrot & Cilantro Fritters from his beautiful book, Tender, a Cook & His Vegetable Patch. Every time I looked at the photo in the book, my mouth started to water.

I followed the directions to a T, but added a little less cream, since my instincts said 2/3 cup of cream would be too wet. Even with less than that amount, the batter was a big wet mess. 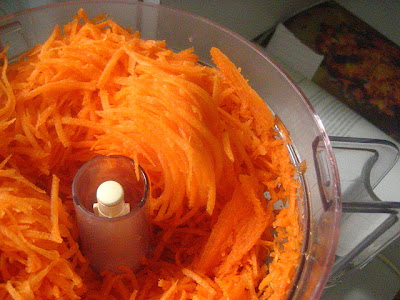 I started frying the lovelies in a nonstick skillet as instructed, and noticed they were falling apart as I flipped them. I know fritters can be tricky. 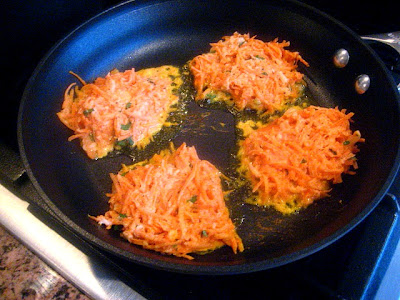 Maybe it needed another egg or more flour? I read thru the recipe again, then went on the internet to see if anyone tried them, and 2 commenters said how great they were, so I couldn't figure out what I was doing wrong.

I was able to turn out 4 decent fritters, but what was I going to do with the rest of the batter? (That was a lot of work grating all those carrots). 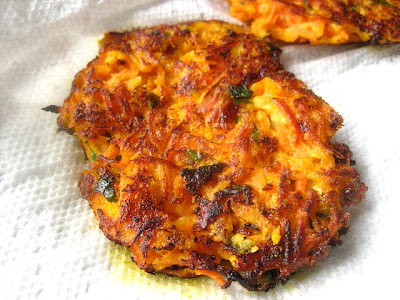 My instincts said throw in 2 more eggs, more cilantro and some grated Parmesan. I dumped the rest of the batter into the well oiled skillet. A carrot frittata is what I was going for.

I cooked the pan on medium heat in the oil for about 6 minutes, until the sides were firm and the eggs were starting to get firm.
Placed it under the broiler for 2 minutes to brown the top, then slid it out of the pan and sliced it into wedges. 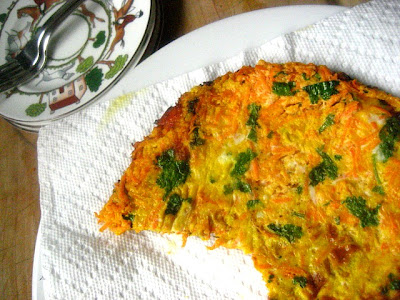 This turned out to be a happy accident. The taste was fantastic! The day was saved and the world was right again.

Content in a Cottage said…
I like your version better than the fritter version. Isn't it great when accidents turn out to be happy AND delicious? I never ever would have thought of carrots as the main ingredient. Thanks!
February 9, 2012 at 9:23 AM

This Charming Pan said…
I had 2 attempts at this recipe , both failed ! i was so looking forward to those crunchy little fritters but they just seperated and wouldn't hold together , ended up in the bin . Still love Nige , Love your site Stacey
February 9, 2012 at 10:31 AM

Proud Italian Cook said…
I love your frittata recipe even better! I always put mine under the broiler too, it gets them nice and golden!
February 9, 2012 at 10:36 AM

Ciao Chow Linda said…
It can be frustrating when a recipe from a cookbook just doesn't work and with no good reason. But you showed your resourcefulness and good instincts by rescuing this.
February 9, 2012 at 1:09 PM

Joanne said…
You got a huge carrot fritatta pancake! I choose that over the original.
February 9, 2012 at 9:10 PM