I LOVE fruitcake. Can we still be friends? 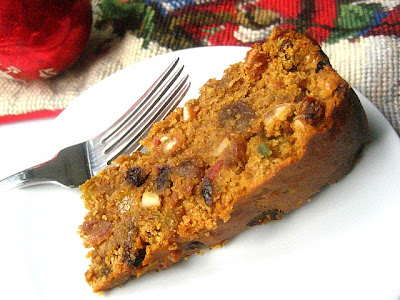 Why this hatred toward fruitcake?

I absolutely love it. But it has to be made right, with quality candied or dried fruit, nuts and LIQUOR. My mom used to make it by soaking the cake in cheese cloth and turned it for weeks until it was ready. Just a tiny slice, that's all you needed.

The Italians also love their holiday fruitcake called Panforte from Siena, which I also love.

I know you have probably been traumatized as a child from that holiday fruit cake that is dry with the maraschino cherries sent from an aunt whom you never really liked anyway, or that gross pineapple and macadamia nut cake that comes from some factory in the red box, but I think this recipe might convert you. 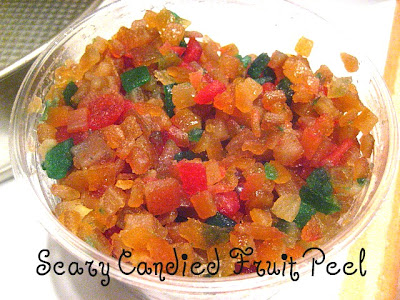 It is from that lovely Rose Bakery Cookbook, and the British (though the bakery is located in Paris) know how to do fruit cake.

I changed only a few things in the recipe, like instead of whiskey, I used Grand Marnier (cause my mom used it and it's nice w/ the dried fruit). I also took out some of the raisins and threw in some chopped dried figs along w/ some chopped raw almonds for a nice crunch.

Fruit cake is very forgiving, you can add a little of this or that and it lasts forever. You can make it 3 weeks before Christmas and the longer it sits, the better it gets. 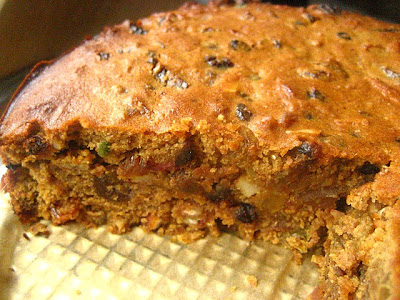 In a large bowl, mix all the raisins and fruit w/ the lemon and orange zest and juice. Add the liquor and marmalade and let the mixture sit and macerate for an hour on the counter.

Beat the butter and sugar until light in color then beat in the treacle. Next, beat in the eggs, one at a time, beating well after each addition.

Fold in the flour and ground almonds, cinnamon and allspice and salt. Finally, fold in the fruit mixture.

Butter a 10" cake tin and line the bottom and sides with parchment paper so you can lift the cake out easily. 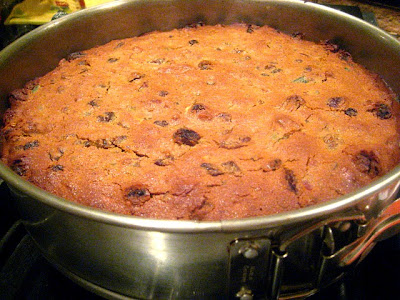 Bake in a 325F oven for 1 hour. You may need 5 more minutes, ovens and baking tins vary in cooking times. Cool the cake in the cake tin then remove and wrap tightly in foil.

You really don't need a hard sauce or icing on this cake unless you want your fillings to fall out.
Stays well for weeks and you only need a little slice with coffee. 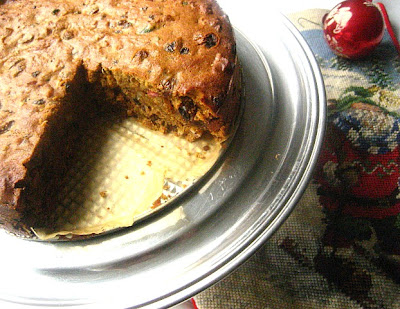 Maybe now that you are all grown up you might revisit this scary thing called "Fruit Cake"!

Jonny said…
I'm totally with you. Don't hate on the fruitcake! Sure, a lot of it can be hard, dense and stick to the roof of your mouth like a limpet, but when made well, it can be delicious! Nice touch with the grand marnier - i've never put it in the cake, only in the whipped cream i've served on the side. sounds fantastic! Happy Holidays, Stacey!
December 22, 2011 at 8:24 AM

Susan..... said…
I think we were lucky growing up...no fruitcake in my house but this looks good enough to start a new tradition around here. I see you also use your springform pan for just about everything.

stacey snacks said…
Susan,
You are correct.
A springform pan is my pan of choice for most things these days. I have 3 different sizes and use them for cakes and quiches. It guarantees an easy release from the pan and I have no anxiety!

Ciao Chow Linda said…
Stacey - That candied fruit does indeed look scary, but your version looks good enough to hoard - or to give to friends. Any thoughts of Princeton come to mind?
December 22, 2011 at 11:24 AM

rain said…
ive always been the weirdo who loved fruitcake too : D

RecipeGirl said…
I don't hate on fruitcake in general, as long as it's homemade! Just don't try and pass off one of those icky store-bought things ;) Happy holidays to you!
December 22, 2011 at 4:57 PM