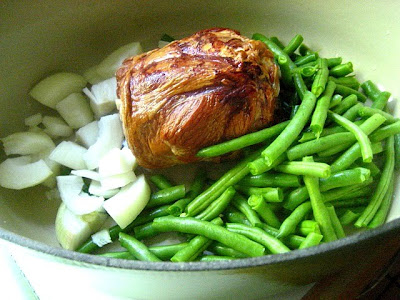 Remember that weird smoked pork shank I received as a gift last year?

I have had many emails from readers from Ohio, saying that this is called a "Cottage Ham" in their parts. Strange that I found it in New Jersey, but the butcher is from Ohio. That makes sense.
It's all coming together now.

A few of the commenters sent me their recipe for Cottage Ham w/ Green Beans and Potatoes.
Sounded simple enough, and since I had one more smoked ham shank in the freezer, this was an easy weeknight dinner.

There's nothing much to it, except maybe finding this alien thing called a Cottage Ham. 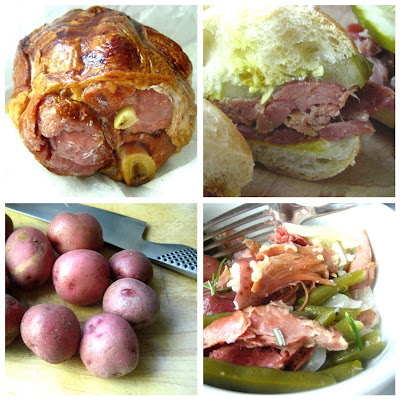 You throw it in a pot and cover it with water and simmer the pork shank for an hour.

Add a chopped up large onion and 2 cups of fresh green beans to the pot (you have to have like well done green beans......Hank!).

Simmer this with the lid on for 45 minutes then throw in some baby new red potatoes and simmer on the stove another 45 minutes. (The pork shank needed about 2 1/2 hours to cook). 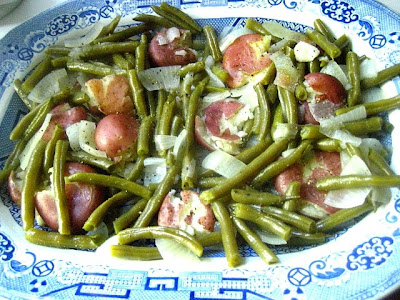 Shred the meat (it will fall off the bone) and serve over the mushy smoky green beans with the boiled potatoes.
Don't throw away the cooking liquid, it makes for a delicious soup stock.

This was delicious and I see why I got all those emails about this type of ham.
It's fun learning about foods that are from different parts of the country. 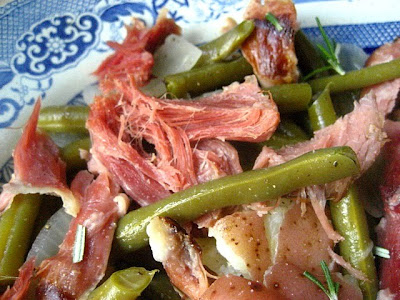 Thanks to all my Ohio readers.

PS this made wonderful sandwiches the next day on buns w/ dill pickles and honey mustard! 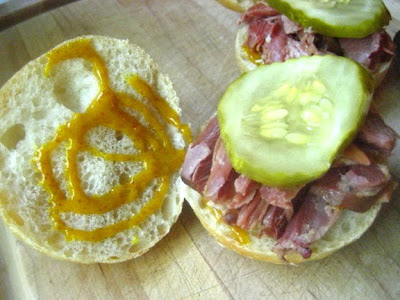 My Mother cooked cottage ham frequently. All I remember was the pot simmering on the stove.
Don't remember a bone either.
It was fall-apart tender - and delicious. I think it had a netting enclosing it.
Mil
October 21, 2011 at 9:48 AM

Joanne said…
I have never heard of such a thing before but it seems like you found the perfect way to cook it!
October 21, 2011 at 1:10 PM

Oui Chef said…
Hmmm...and I would call this a smoked ham hock, go figure. Either way it looks lovely, though I would struggle with the beans being cooked that long, there are some really nasty childhood memories hidden in squishy green beans.
October 21, 2011 at 3:57 PM

Sam Hoffer / My Carolina Kitchen said…
Reminds me of southern food as in a ham hock, as Oui Chef said above. Love that you had leftovers.

Anonymous said…
It looks like a Smoked Butt to me, which is popular with the Eastern Europeans in Chicago. I've made it with cabbage, potatoes, and carrots like a New England dinner.
A wholesome meal on a cold evening.
October 22, 2011 at 6:55 PM

Christine said…
Growing up in Wisc. & Ill. we had smoked pork butt as a kid which I loved. It's essentially pork shanks without the bones, tied by a string net. My mom would make it with cabbage. Ran across smoked ham shanks recently when I found a recipe at Cooking By the Seat of My Pants last Oct. It sounded so good (and was). Of course finding smoked ham shanks here in So Cal, is as hard as smoked butt! The "butchers" kept directing me to hocks...not the same! Shanks are a lot meatier. Finally printed out a picture of both from the internet and found them at a not so local store, so now I buy several and freeze. Great chilly night food! I look forward to trying your recipe real soon, looks delcious! Great idea for the leftovers. Thanks so much!
October 27, 2011 at 5:00 PM

Anonymous said…
I am from Cincinnati, Ohio and it is one of my absolute favorite meals!!! My grandma made it ALL the time!
October 15, 2012 at 8:47 PM

mamashari said…
I grew up in Cincinnati, and imagine my dismay when I moved out west and nobody ever heard of cottage ham!I had to phone back home and get my aunt to tell me it's really pork shoulder butt (oops, we're not supposed to use butt any more) ROFLMBO
August 21, 2013 at 12:41 PM

Unknown said…
I am from Cincinnati as well. My husband keeps asking for this recipe his grandma made all the time. Thing is....I could never find the "cottage ham". I sat him down today to Google images with me. This is, in fact, the ham he is looking for. Hope it turns out okay. You know how we love being compared to their mothers and grandmothers...lol.
January 7, 2014 at 11:16 AM

Unknown said…
My mom is from Cincinnati, Ohio and the only place you can get a really true Cottage Ham. Other place may say their are.. but they are not... I LOVE the taste of the over cooked mushy green been's that have been cooked in the juice of the ham... they have the very best taste every for a simple green bean... my mom use to make this as a special dinner on those occasions my Uncle would bring us Cottage Ham's when he would come to visit Texas.... once you have had a real Cottage Ham... other hams just won't taste as good...
February 15, 2014 at 8:40 PM

Anonymous said…
I live in (but am not from) Cincinnati. A few pointers. Traditionally, you chunk the cottage ham in some water and simmer (reduce from a boil) for about 45 minutes with a sliced (white, preferably) onion. I always add some black peppercorns and some garlic cloves to the simmering liquid. But the real key is summer savory, which is Bohnenkraut in German (or "bean herb"). That is what makes the beans and cottage ham so special and memorable. Dried or fresh (if you can find the fresh). After 45 minutes add the beans and cook with red potatoes until both are tender. great WEBSITE. eD
May 13, 2014 at 4:32 PM

alassnsane said…
Cincinnati born and bred here. I'd no idea until today that Cottage Ham is only a local thing. Pity, as the rest of the world is missing out. It has always been a delicious staple in my family.

I wanted to add a few comments regarding how it's traditionally prepared in Cincinnati. The cottage hams themselves are readily available in any grocery store here and I have never noticed any being bone-in. In our family, when serving, the ham has always been removed from the pot, rested for a few minutes then sliced about a third of an inch thick. I have never seen or heard of anyone serving it "shredded" although, as it does tend to overcook at times, it can fall apart a bit.

Also, red potatoes are always used as well as fresh, never canned, green beans. My mother and grandmother always halved, quartered then halved again one large onion rather than chopping it so that there were large, distinct pieces of cooked onion.

Usually the meal consisted of simply those four ingredients - the cottage ham, the red potatoes, the fresh green beans and onion, though as often as not they would also toss in some minced garlic, usually dried. Almost always buttered bread accompanied the meal to sop up the delicious juices.

As others have noted this medley of smokey, wholesome, homespun flavors is perfect on crisp fall or chilly winters days. To me, this meal simply feels like home.
June 11, 2015 at 4:27 PM

Unknown said…
We have lots of them in Canada. Known as cottage hams.

Unknown said…
I know this is a really old post, but I live in Cincinnati too and just bought a cottage ham today. The meat market at Findlay Market has them along with fantastic smoked hock and shanks, and any other random pig, turkey or beef parts you can't find at the grocery or speciality markets.
August 28, 2016 at 2:57 PM

Joe miller said…
Imoved to Florida in the fifties from Akron Ohio. So the other day I remembered cottage hams and how good they were as a meal and as a sandwich the next couple days. So I searched and found them in public’s warmest hidden away inpork bellies,salt pork hocks. I took a small one as I am alone and checked out recipes for the instant pot as long cooking times are for me.I used to just boil them and use a meat thermometer to check them and they always turned out good. If my memory remembers it seems this would take about 1hour so I will be experiencing this today and let you know what happens
August 17, 2018 at 12:17 PM

Unknown said…
I grew up in Cincinnati, and my grandma fixed this frequently. But she made a white sauce to hers. It was one of my favorite meals, and even my daughter and youngest son love this. nib
August 27, 2018 at 4:12 PM

RMK said…
Yes cottage hams are a staple in the Cincinnati & Northern Ky area due to our strong German & Irish heritage. When cooked correctly they should fall apart & shred easily from hours long simmering on stovetop or pressure cooker. These hams are great as a New England boiled dinner (cottage ham, red potatoes,cabbage), green beans, cottage ham & red potatoes, & 13 bean soup with cottage ham. The ham adds a smokey flavorful addition to these meals.
May 27, 2020 at 3:46 PM