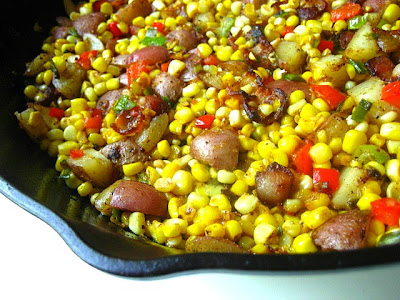 This is the pride of New Jersey summer produce. Our wonderful corn. I know you've heard a lot about our tomatoes, but our corn is amazing too.

This season's corn has been so sweet, you don't even need to cook it, you can eat it raw off the cob.

For my last of the summer corn, I decided on a corn hash after seeing Anthony Bourdain sampling it on his New Orleans Cajun cooking episode last week. I didn't have tasso ham, so used bacon instead.

A cast iron skillet is a must for this recipe. Sorry to be so bossy. 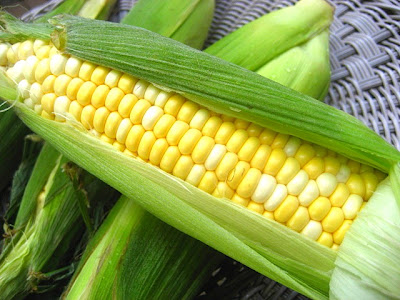 After shucking the corn and removing all the silks, stand each piece of corn on a cutting board. With a sharp knife, carefully run it from top to bottom on 4 sides, leaving some of the pieces of corn whole. Try and get all the good corn liquid along with the kernels. 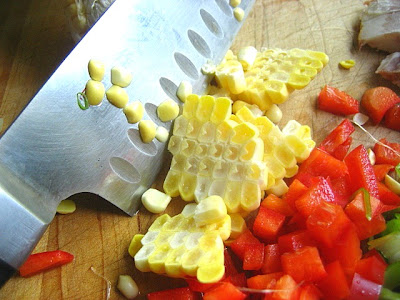 In a large 12" cast iron skillet, heat the half stick of butter and cook the bacon (I know, really healthy) about 2 minutes.

Now add the rest of the ingredients and cook without disturbing for 5 minutes so the corn gets nice and blackened.

With a spatula, move the hash around so the other side of the corn gets done and all the vegetables are soft. About 15 minutes total.

Season to taste with salt & pepper and if you like some cayenne pepper!

Great as a side dish or for breakfast with a fried egg on top! 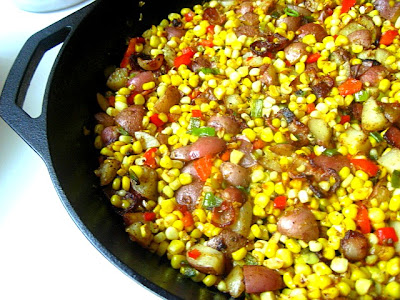 Sam Hoffer / My Carolina Kitchen said…
You are so right Stacey. Jersey corn is the best. I wish I had some right now. Ours here has been on the sweet side this year.

Love the idea of the hash. So homey in the iron skillet and I really like the dash of hot sauce at the end.
Sam
September 7, 2011 at 7:03 AM

Kristin Pinyan said…
That hash is an awesome idea! It looks delicious. I've always been an on-the-cob girl, but this year I'm being converted. I just need to figure out how to cut those kernels off more effectively - I tend to leave half of the good stuff behind!
September 7, 2011 at 7:42 AM

Eileen said…
I'm loving the end-of-summer corn right now also in Minnesota. An egg on top of this dish sounds delicious!
September 7, 2011 at 8:19 AM

Rivki Locker said…
Just came across your site today (through Eats Well with Others) and am so pleased I did. I live in NJ too and am always looking for new uses for corn. This looks lovely. IMHO, a cast iron skillet is a must for just about EVERY recipe. I don't think you're bossy at all! :)
Glad to have found your blog today. I look forward to looking through your recipes and following your new posts.
September 7, 2011 at 9:16 AM

Joanne said…
For my entire childhood my mom tried to convince me that eating raw corn would make my stomach hurt...how wrong she was! This hash looks delicious!

Dana said…
I went to my neighborhood market in need of 15 ears of corn (I'm catering) and they were so small and pitiful that I am going to have to make a trip to a supermarket tomorrow to get some. I totally thought of you and your Jersey corn. Wish you could send me some! :)
September 8, 2011 at 2:19 AM

Vicki said…
I bought one of these and it works great (no full disclosure necessary...I just think it's a great tool)

dm said…
Our corn here in England is horrible and we don't have white corn. :( I miss going to the roadside stands and getting my fruit and veggies in south Jersey.
September 8, 2011 at 3:05 AM

Proud Italian Cook said…
Too elegant looking to call it hash, and I have to admit Jersey corn looks way bettr than Chicago corn!
September 8, 2011 at 10:33 PM

Patty H. said…
This sounds so delicious! For some reason I haven't had that much sweet corn this year, but I definitely want to try this recipe.
September 8, 2011 at 11:03 PM