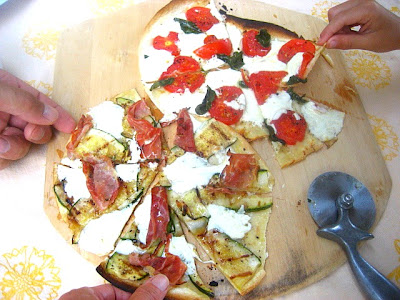 This was the only way I could get rid of the last of my zucchini & tomatoes.

Invite people over for a pizza party (with drinks of course!).

Then I made zucchini & speck pizzas. 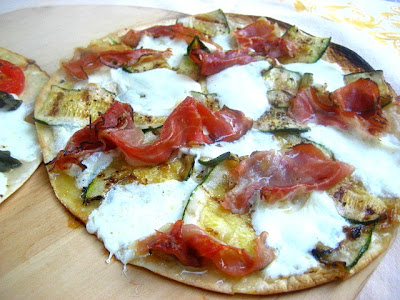 I got rid of a lot of tomatoes and the last of the zucchini. Goodbye and good riddance.....(though I will feel bad during the winter months when I have none).

(Pepin's recipe calls for using a pizza stone in a 500F oven for a few minutes, but I cooked mine on the grill. They came out great). 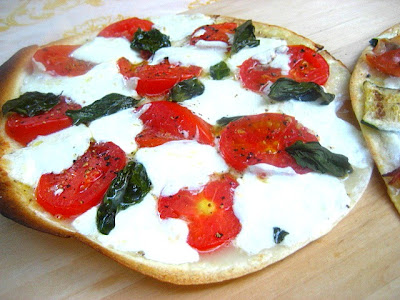 Brush the tortillas on both sides with olive oil and sprinkle with a tbsp of parmesan cheese.

Slice the tomatoes into thin slices and lay on top of the tortillas. Sprinkle w/ kosher salt & pepper.

Shred the mozzarella with your hand and place around the tomatoes. Throw some basil leaves on top and drizzle with olive oil. 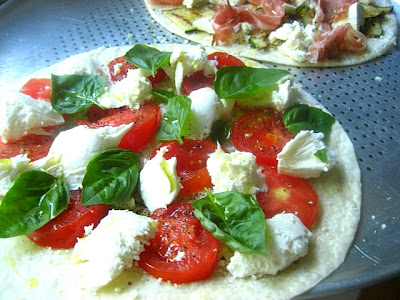 all the same ingredients as the Margherita pizzas, except omit the basil & tomatoes
and add:
a few slices of grilled zucchini (I seem to always have some on hand)
a few slices of speck (smoked prosciutto)

Do the same thing as the margherita pizzas. Brush with olive oil and sprinkle with the Parmesan cheese.

Lay the grilled zucchini slices on top and scatter the fresh mozzarella around the zucchini.

Drape a few slices of speck on top of the zucchini and cheese and drizzle with olive oil. 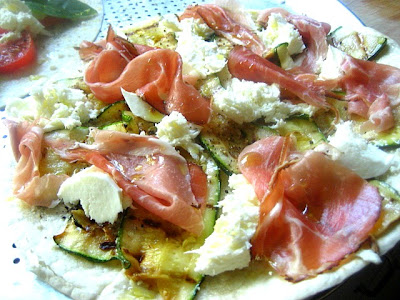 Either cook in the oven at 500F on a heated pizza stone, or cook on the grill a few minutes in a pizza pan. Keep a close watch on the tortillas, as they are thin and can burn easily.

Dig in and enjoy! 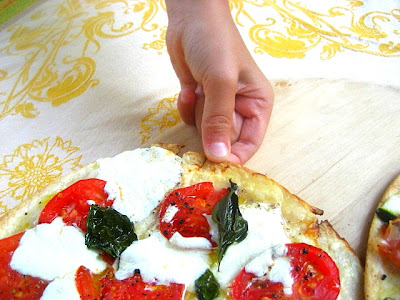 Ciao Chow Linda said…
They look sensational Stacey. I think I'll do the same with my tomatoes this weekend - (or your gazpacho soup)
September 9, 2011 at 7:40 AM

Jersey Girl Cooks said…
Those are some great looking pizzas! how did you get the crust so thin? I love it like that.
September 9, 2011 at 9:54 AM

Joanne said…
I'm definitely going to miss these summer veggies, but there's something really satisfying about making a clean break like this.
September 9, 2011 at 4:21 PM

Proud Italian Cook said…
When I have boots on and a coat I will wish for summer produce, my garden is on overkill right now and I'm ready to say bye bye too! A tortilla, how easy is that! Looks so crispy!
September 9, 2011 at 5:09 PM

Bites from life with the barking lot said…
They look wonderful! But...I'm still waiting for my tomatoes to turn from a lovely green to red. Montana weather.....
September 10, 2011 at 11:16 AM

Dana said…
Really, tortillas? I've used Trader Joe's flatbreads before but not tortillas. Seeing as I like my crust super thin, this actually makes a lot of sense. End of summer - boo hoo.
September 12, 2011 at 2:24 AM

Anonymous said…
I gravitated towards your blog having grown up a Jersey girl myself, not far from Summit. After much protestation from my pre-teen (when is there not?), my three school aged kids made their own pizzas this weekend and said they were "the BEST pizzas EVER!" The pre-teen then apologized. We made the classic tomato basil mozzarella, but also a prosciutto, fig, goat cheese with truffle oil (YUM!). Your Roast Chicken with Sage Butter and Garlic was a HIT too (now holds a spot in our family faves file). Just wanted to let you know that you changed our family eating in one weekend! Your photos of France made me reminisce about our trips too. *sigh*