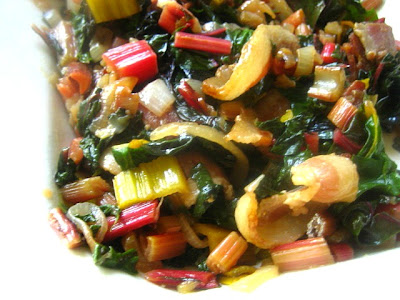 This weekend, the Moody Beet Farmer (who is really a nice guy and does smile more than not!) had gorgeous rainbow Swiss chard.

I never really know what I am going to do with it, but I can't resist buying it, the bright colors draw me right in.

I decided to make a hash. I can serve it today with a fried egg, tomorrow over pasta and the next day make a tart with it (oh, now there's a surprise).

I bought the farmer's beautiful onions and cut 2 of them up into thin slices.

I sauteed them with some bacon and the Swiss chard along with some nice freshly picked onions. I was lucky enough to have some leftover roasted potatoes from the night before, so threw them in at the end of cooking. 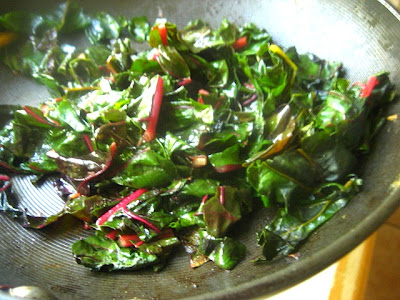 This makes enough for a few recipes. We folded it into omelets, and loved it over some linguine.

Using a large skillet, heat some olive oil and throw in the onions, potatoes and bacon. Cook a few minutes on medium heat then add all of the chopped Swiss chard. Season with salt & pepper and cook about 10 minutes until the potatoes are soft and the chard is wilted. 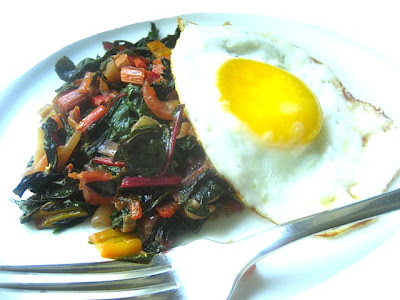 You can make this 2 days ahead and keep in the fridge. Delicious!

Very happy you and the farmer are on good terms. His produce produces beautiful food - thanks to both of you. Just like that - a colorful, nutritious easy dish.
Mil
August 3, 2011 at 8:34 AM

T.W. Barritt at Culinary Types said…
Really nice! I have been doing much better utilizing the Swiss chard from my CSA this year. I am determined to cook it as quickly as possible so it doesn't wilt and I enjoy all the benefits. Love your two day plan for hash and a tart!
August 3, 2011 at 9:11 AM

Ciao Chow Linda said…
I just came in from the garden and picked a big bunch of chard and Tuscan kale - Swiss chard is one of my favorite vegetables. A quick saute like you did is a fast, easy and delicious way to use it. Qith the weather a little cooler today, I'm going to make some ribollita and freeze a bunch.
August 3, 2011 at 10:24 AM

ldhitch said…
Hi Stacey. I love, love, LOVE swiss chard and I think everyone needs to try it this way to become a lover too! I cook it in about 2 inches of water in a huge pot, (it will cook down), until the stems are tender. After draining, I squeeze out all the liquid and chop it up. Then I saute some garlic in olive oil, add the chard as well as 2-3 potatoes that I boiled earlier. Mash the potatoes into the chard, drizzle a bit more olive oil, salt and pepper. Wonderful! My nonna made this for us and we would have it as a meal with some hard crusty Italian bread!
August 3, 2011 at 11:53 AM

Joanne said…
I can never resist rainbow chard either and I'm always happy when it comes with my CSA! This hash sounds so tasty. Love how easy it it.
August 3, 2011 at 2:52 PM

Proud Italian Cook said…
Now this is another great use for chard. I have a ton growing in my garden, thank you MS Stacey!
August 4, 2011 at 9:07 PM