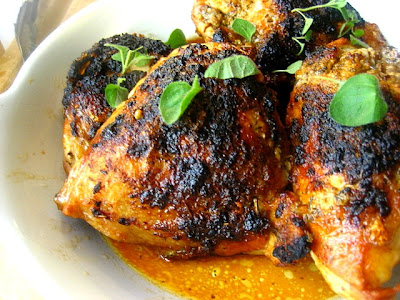 This is a very popular dish on menus in local Italian restaurants, but what I didn't realize was that this dish is local only to the Garden State! (That would be New Jersey).

It originated at the Belmont Tavern, a still good, old school, Italian American neighborhood restaurant with red & white checkered tablecloths in Belleville, NJ (some people say it's in Newark). It was created by a cook named Stretch and people remember it well. 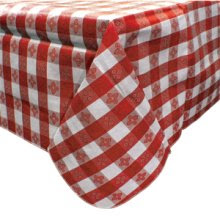 We used to frequent there in college and eat cavatelli with pot cheese, clams oreganata and the famous Chicken Savoy. (I guess the "Savoy" has nothing to do with the luxury hotel in London).

This is pretty close to Stretch's original recipe, which I found on the Saveur website, but since most of us don't own restaurant commercial ovens that go to 700F degrees, it may not be as authentic as the original, but it was damn close.

There is a ton of vinegar in the recipe, which is what makes it good, and you have to use chicken pieces on the bone, don't bother with the boneless stuff, it will dry out.

I made mine in a cast iron skillet and it was as good as I remember.

I could only fit 4 pieces of chicken in my skillet. You don't want to crowd them, so use the largest skillet you have.

Heat oven to 500F˚. Season chicken with salt and pepper to taste and set aside.

In a small food processor, finely chop together garlic along with pecorino, 3 tbsp. of the olive oil, oregano, and thyme. Set herb paste aside.

Heat remaining 1 tbsp. of oil in a 12" cast-iron skillet over medium-high heat. Add chicken, skin side down, and cook until golden brown, 6–8 minutes. Turn chicken pieces over with tongs. 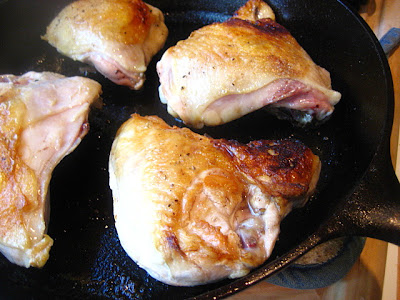 Using a spoon, smear the chicken skin with the herb paste. 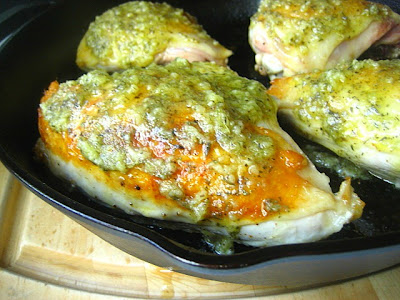 Transfer skillet to oven and cook until well browned and cooked through, about 20 minutes.

I had to remove my smoke alarm because the smoke filled the house, so make sure you use your exhaust fan.

The tops of the skin may be a bit blackened, but it doesn't detract from the wonderful flavor. 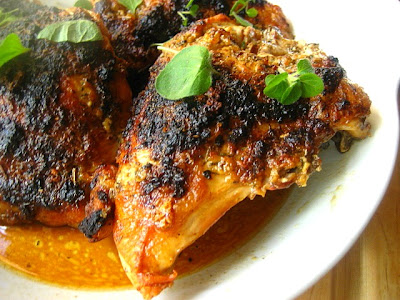 I garnished with fresh oregano leaves.

Jersey Joe said…
Stace, I haven't been to the Belmont Tavern in years......thanks for reminding me of that amazing chicken savoy!

Karen said…
I was just at the Belmont Tavern a few weeks ago. I would love to make this at home! I live and grew up in the area (Montclair) and I would have bet money that Belmont was in Newark. Learn something everyday.
June 7, 2011 at 9:50 AM

Oui, Chef said…
This sounds gorgeous and reminds me of a French preparation also heavy on the vinegar...it's killer! Chicken can be so bland, and I love dishes like this that grab hold and show it who's boss! - S
June 7, 2011 at 1:11 PM

Proud Italian Cook said…
Although I never heard of savoy chicken I love it all ready with that herby paste and crunchy dark brown skin!
June 7, 2011 at 4:01 PM

Ginny Lee said…
oh, oh (raising hand) have you ever ground up raw bacon and herbs (rosemary/oregano/thyme) with some salt and pepper and stuffed under chicken or turkey skin and roasted? if not, you should--Proud Italian Cooks post reminded me :)
June 7, 2011 at 7:17 PM

Cath said…
Cooked this the other night...it was a smash hit! I'm already planning when next we'll have your Savoy Chicken and different ways to tweak the recipe.
June 14, 2011 at 3:31 AM

Karen said…
Made it tonight. Was delicious, will definitely make it again. Thank you for sharing!
November 5, 2017 at 8:49 PM

Eric Potruch said…
This was really good. I have made this dish before, baking it in a 425° oven for 55 minutes, without using the skillet or browning the skin first. Used a cup of chicken broth in that pan as well. The skin was a lot thinner once done. With thus dish, the skin came out just a little chewy, but the flavor was a lot brighter, probably because of the amount of vinegar (I used just 1/2 cup.
July 19, 2019 at 11:14 PM