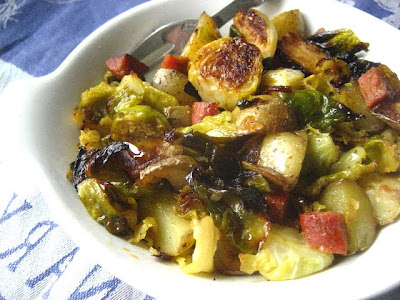 I recently had this as a side dish at a local restaurant, served to me in one of those little cast iron Staub skillets which I covet.
I loved it so much that I ordered a second order as my entree!

The original dish had pancetta in it (it was an Italian restaurant), but I wanted a bit of heat, so I recreated the dish using good Spanish chorizo.

This was hearty enough for the main meal, but it would make an amazing side dish next to roast chicken or a roast pork dish.
Another nice thing about it, is that it can be prepared in skillet.

I will remind you about this dish in the cooler weather when you are craving Brussels sprouts! It's still COLD here......the winter that never ends. 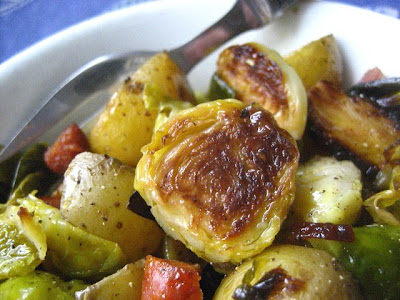 In a 12" seasoned cast iron skillet, heat your olive oil and cook the diced chorizo with the shallots until cooked. Transfer to a bowl and set aside. 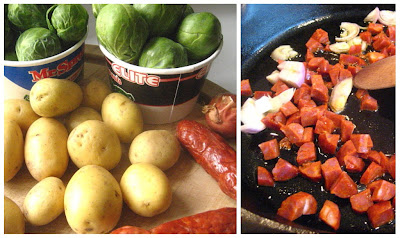 In the same skillet, add the quartered potatoes and halved Brussels sprouts. Toss them around in the nice spicy oil (leftover from the chorizo). You may need to add a little more olive oil. Make sure everything is coated with oil and season with kosher salt. 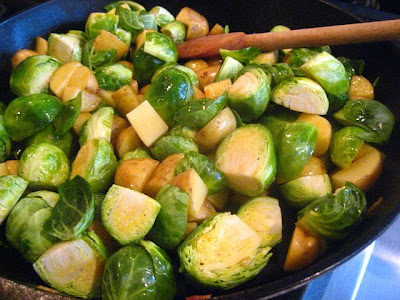 Place the cast iron skillet (be careful, the handle may still be hot from the stove) in a 425F oven. Roast the potatoes & sprouts for about 35-40 minutes until they look done.

Add the cooked chorizo and shallots to the pan and toss. 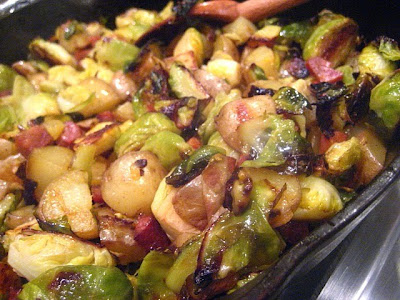 Joanne said…
Well, I am ALWAYS craving brussels sprouts and this sounds like a fabulous one-dish way to enjoy them!
April 4, 2011 at 12:40 PM

Melissa @IWasBornToCook said…
That looks great...I usually put pancetta in with my brussels sprouts but chorizo would be delicious, too!
April 4, 2011 at 1:16 PM

Mister Meatball said…
Thanks for stopping by, and for the kind words.

You eat just like I do, you know. Maybe not as much as me, but still..

The Jr. Chef said…
Wow, I am not a brussel sprout fan, but those look great! Wonderful recipes and pictures- you are very talented. Please visit my blog Picky Eater Solutions, I am a new food blogger just learning the ropes. www.pickyeatersolutions.blogspot.com
April 4, 2011 at 4:44 PM

Ciao Chow Linda said…
all those flavors together sound great. I need to get some chorizo and brussels sprouts and make this dish. easy and delicious.
April 4, 2011 at 6:09 PM

judee@glutenfreeA-Z said…
Always good to have another brussels sprout recipe. thanks, this one looks good..
April 5, 2011 at 8:39 AM

tasteofbeirut said…
This is delicious and you are reminding me I have not had that many brussel sprouts this year! Time to remedy the situation!
April 5, 2011 at 10:09 AM

Proud Italian Cook said…
I love how you added chorizo. Tell Henry to get you a couple of those little Staub skillets for your blog.
April 5, 2011 at 5:26 PM

tom | tall clover farm said…
Not sure how I missed this jewel, but thank goodness I found it after the fact. Siddled up with pineapple sorbet and ooh wee I'll eat the WHOLE thing!
April 11, 2011 at 11:00 AM