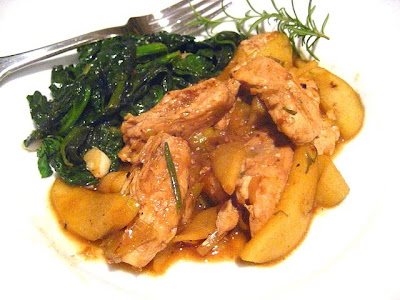 I have had this in my recipe file since the fall and never got around to trying it during apple season.

Well, now it's spring and leeks are in season, so I figured I would give it a test run.
I don't often give simple recipes like these a 5 star rating, but this time I am going to. 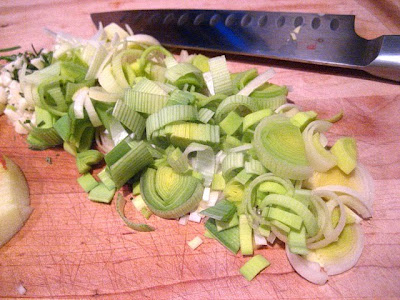 This is like a dumbed down version of (sorry that I am using that much hated phrase, but it is fitting for this) Chicken Normandy, minus the Calvados and the cream.

Everything about it makes it a definite "make again" recipe.

The smell, the ease, the flavor and the appearance all make it a 5 star recipe in my book (and it costs under $10. and serves 4 people....). "WINNING!" (another hated phrase from that idiot, Charlie Sheen.....I can't help myself today). 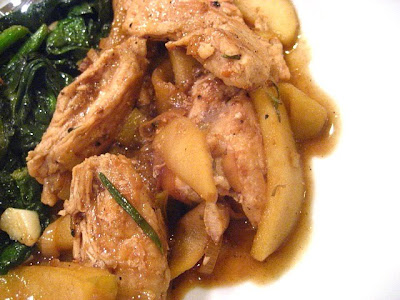 In a large heavy skillet (I used cast iron), heat about 3 tbsp olive oil and cook the chicken pieces on high heat for about 5 minutes on each side. Remove from pan and set aside.

Add a little more oil to the skillet and cook the leeks with garlic and rosemary, about 2-3 minutes until getting soft. 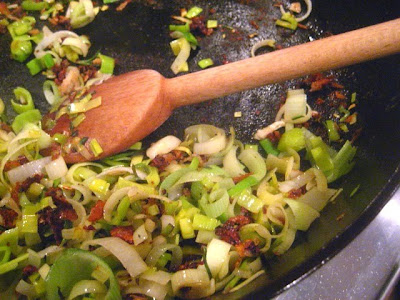 On high heat, add the cider vinegar and cook for 30 seconds or so until all the liquid is absorbed into the leek mixture. Add the tablespoon of brown sugar and toss with a wooden spoon.

Now add the apple slices and toss with the leek mixture for about 2 minutes until apples are browning and getting soft. 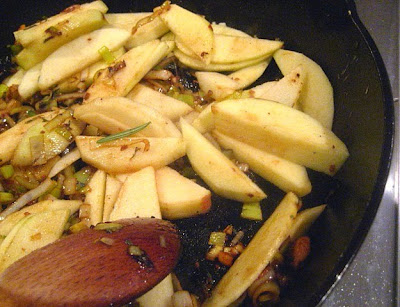 Add the cup of chicken stock and bring to a boil. Add the chicken pieces back into the skillet and simmer another 3 minutes until chicken is cooked thru. The sauce will be a nice consistency.

Serve immediately over sauteed spinach (like I did), or mashed potatoes or polenta. 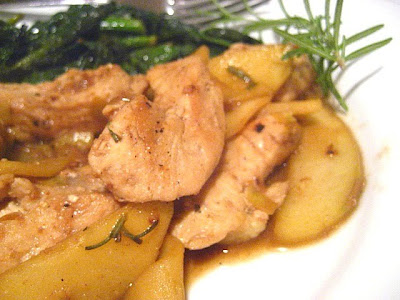 Joanne said…
I love it when simple ingredients with a simple preparation come together to make something miraculously delicious. This sounds like a great dish!
March 30, 2011 at 12:42 PM

Claudia said…
I am all about ease - so have marked this. It's the sort of dish that has ingredients that are actually usually around the home. (Glad you didn't say this made you feel like "a rock star from Mars" or anything)
March 30, 2011 at 5:43 PM

tasteofbeirut said…
I love the combo of chicken and apples, having recently made some apple chutney to go with the chicken; this is an easier approach that is no less delicious.
March 31, 2011 at 12:40 PM

Debby in Tacoma said…
Sounds wonderful especially with Yukon mashed potatoes on a cold foggy wet day in Tacoma. The hub deserves a real meal tonight. Thank You Stacey
January 17, 2014 at 11:49 AM