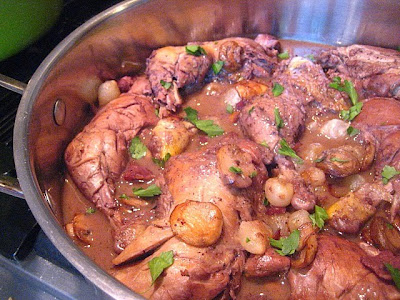 When I was a kid, I thought this was called COCOA VAN.

Then when I took French in school, I figured out, though it was pronounced almost the same as "coco-van", it only meant "chicken with wine".
I never was voted valedictorian. 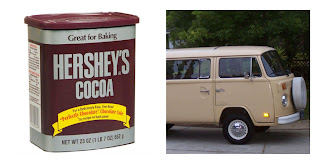 On a more serious note, this is a very serious dish.

This old school French bistro dish can be a 3 day affair if you do it the traditional French way, as Anne Willan at LaVarenne Cooking School would have you do.

She marinates the chicken for up to 3 days in a bottle of Beaujolais with all the other lovely ingredients. Who plans 3 days ahead? I wanted something easier (sorry Anne, I do love you, but......).

I found this simple version on Simply Recipes and mixed it in with the real French version from The Country Cooking of France by Ms. Willan, and I was very pleased with the results.

Another debate about coq au vin is whether to serve it over buttered noodles or not.

This is not typically the French way. When I consulted 3 of my French cookbooks, no one gives a mention to the silky, delicious, buttered egg noodle. Most bistros in Paris serve it with parsleyed potatoes or a frisee salad, but I say go ahead and serve them over the noodles, it makes the dish irresistible and after all, we are not in France. 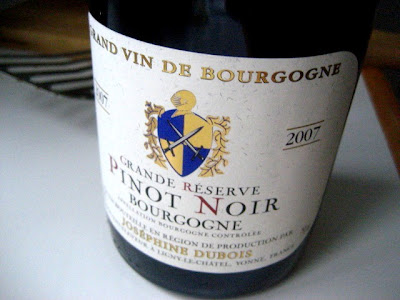 I recommend having all of your ingredients ready to go, including having the wine opened! Mise en place! It makes life easier.

You will need:
~ a small skillet for sauteing the mushrooms & onions.
~ a large Dutch oven (enough to hold about 8 chicken legs, about a 7 qt)
~ a 12" lidded, handled skillet or casserole dish to finish the dish
~ a platter to hold the cooked bacon and chicken when you remove it from the sauce

The original recipe has you blanch the bacon or lardons to remove saltiness, but I skipped this step and went right for browning it.

Brown bacon on medium high heat in a large Dutch oven big enough to hold the chicken, about 10 minutes. Remove the cooked bacon, set aside.

Keep the bacon fat in the pan. Working in batches, brown the chicken on both sides, about 10 minutes, seasoning the chicken w/ salt & pepper during the browning process.

Spoon off any excess fat. Add the chicken stock, red wine, herbs and the bacon back into the pot. Lower the heat to a simmer. Cover and cook the chicken for about 20 minutes, or until chicken is tender and cooked through. Remove chicken to a separate platter.

Boil the sauce quickly and reduce the liquid by three fourths until it becomes thick and saucy. This will take about 10 minutes. I added a tablespoon of flour to my sauce at the last minute and whisked it so it got nice and thick.

While the sauce is reducing, cook the mushrooms and pearl onions in 2 tablespoons of butter in a small skillet, about 5 minutes, until mushrooms are golden. The smell of mushrooms cooking in butter is amazing. 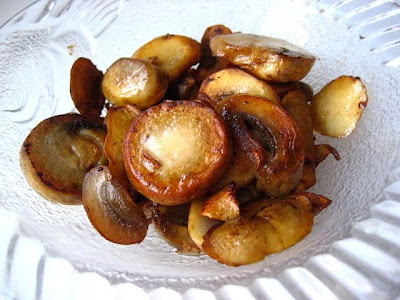 In a separate, clean large 12" lidded skillet or casserole, place your cooked chicken pieces along with the sauteed pearl onions and mushrooms on the bottom of the pan. 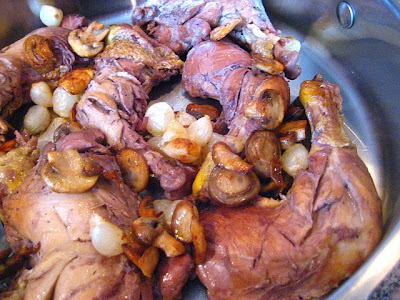 Have a strong person carefully lift up the Dutch oven and strain the sauce over the chicken in the skillet to discard the herbs, garlic, remaining skin bits and bacon (you can save some of the bacon pieces if you want to eat them in the stew, but there is a lot of bacon flavor in the dish). 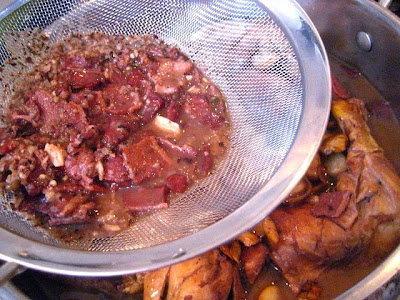 Now you are ready to cover the casserole and place in the fridge for a day or so, this is even better than the day you prepare it, but of course you can eat it right away.

When you are ready to serve the dish, bring the casserole to a simmer, so the chicken and sauce flavors come together. Serve 2 pieces of chicken per person.

Serve over buttered noodles spooning the delicious sauce over the chicken. Add fresh chopped parsley and you are ready to go.

Voila! My Sunday work is done! 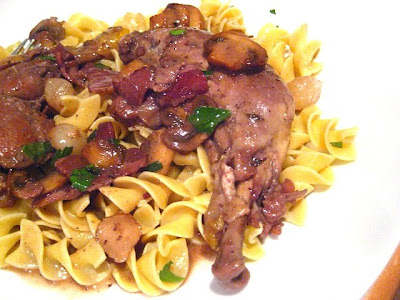 Melissa @IWasBornToCook said…
Looks delicious. I made it a few weeks ago (Ina's recipe). No buttered noodles - I served mashed potatoes on the side. Love this dish!
February 28, 2011 at 8:22 AM

Culinary Cory said…
This sounds lovely. I'd practically eat the garnish by itself.
February 28, 2011 at 8:22 AM

Sam Hoffer / My Carolina Kitchen said…
One of my favorite French dishes. Funny, I don't think I've ever seen it on a menu in a bistro in France. But I confess we only are familiar with the south of France.

rcoda said…
Make this all the time... just last week, in fact. I use a crockpot, but will have to try sauteing the shrooms and onions first. Usually I just throw everything in the pot. And you're right about mushrooms and butter... mmmmm
February 28, 2011 at 11:25 AM

Ciao Chow Linda said…
You're so funny. I think you must have been channeling Mexican mole with that cocoa van. Your version looks like a comforting way to sit down to dinner.
February 28, 2011 at 12:18 PM

Joanne said…
I've made Elise's version of this and loved every bite of it! With all that wine it is some serious comfort food, and just perfect for a Sunday dinner!
February 28, 2011 at 1:01 PM

Rachel's Recipe Reviews said…
We had a French girl stay with us when I was in high school, and she made this for us. I've been scared to try it ever since because her's was SO good! I think I have almost all the ingredients though...hmmm, dinner tonight perhaps?
February 28, 2011 at 3:58 PM