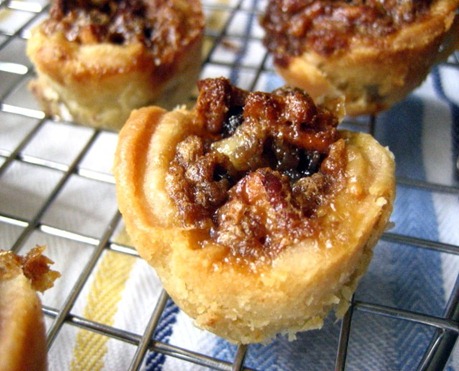 I have been seeing these a lot lately on Canadian food blogs and they looked so delicious and simple to make, I knew I was in trouble!

I had never heard of the "Canadian Butter Tart" before. But I am now a fan.

I hid them in the garage so I would forget they were in the house.
They are sort of like that "crack pie" from Momofuku Milk Bar in NYC that everyone raves about.

These were scary good.

I liked Kevin's recipe, as well as Julie's Grandmother's, so I combined the two.

You can either use maple syrup or corn syrup. I used corn syrup.
Nuts are optional. Pecans or walnuts, I chose walnuts.
Raisins or currants, I chose currants.

Julie's grandmother's short crust pastry with vinegar was fantastic, but you can use your recipe for pate brisee or pie crust.

Scary Canadian Butter Tarts (scary because they are so good, I could eat 10 in one sitting!):

Pastry for a single crust pie

Preheat oven to 400°F. On a lightly floured surface, roll the pastry out 1/4″ thick. Cut out circles using a 4″ cookie cutter, and press into ungreased muffin cups.
(I used mini muffin tins). 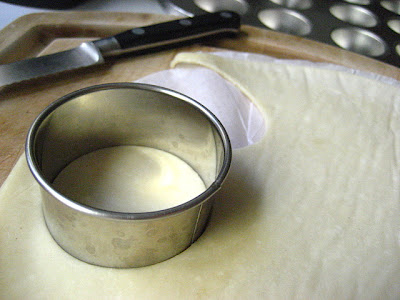 In a medium bowl, stir together the brown sugar, corn syrup, egg, butter and vanilla. Stir in the currants and nuts, if you’re using them.

Fill the tart shells about 2/3 full and bake for 20-25 minutes, until bubbly and golden. 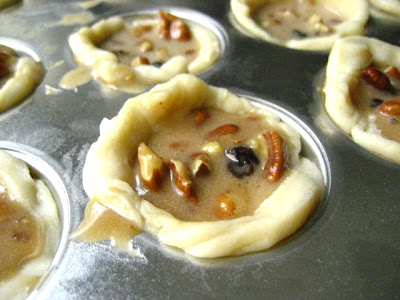 You will want to remove them from the pan using a thin knife or spoon to coax them out while they are still warm, otherwise any stuff that has bubbled over will stick to the pan as it cools.

If it does, pop them back in the oven for a minute to soften it again. Cool on a wire rack. 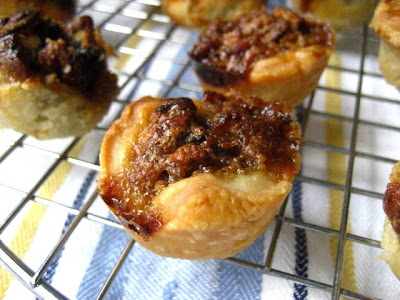 Linda said…
Those look scary indeed! putting them in the garage would not be far enough for me! You go tart queen!!Yummm
Love ya
SIL
November 2, 2010 at 7:22 AM

Carole said…
I think I gained 5 lbs just looking at the photos and reading the ingredients.
November 2, 2010 at 12:51 PM

Recipe for Delicious said…
America doesn't have butter tarts?! It's a good thing you found them, Stacey. I don't know how you've lasted this long without them! It's funny seeing them described as Canadian. I imagine the French feel the same way about toast and onion soup, haha!
November 2, 2010 at 3:55 PM

vanillasugarblog said…
i am NOT making those crack bites! noooo way. lol
November 2, 2010 at 5:39 PM

Anonymous said…
This comment has been removed by a blog administrator.
November 2, 2010 at 10:56 PM

Oui, Chef said…
I've been thinking of making a crack pie for a while....perhaps I should ease into the experience by making some of these sugar bombs. Thanks for the great post and recipe. - S
November 4, 2010 at 8:19 AM

Paige ATL said…
I want to make everything on your blog!!!! But this look like a great alternative to pecan pie and they are so little I can make even more desserts! Thanks!
November 4, 2010 at 2:27 PM

Lisa said…
My Canadian grandmother made the most incredible butter tarts. She used golden raisins, no nuts.
I may have to make these for the holidays. YUM!
November 5, 2010 at 10:01 AM