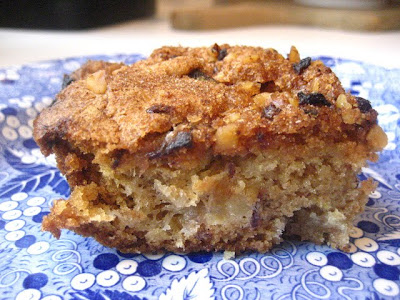 I finally realized why it is that I don't love to bake.
It's the butter thing.

I hate waiting for the butter to come to room temperature, and I also don't like to have to clean a mixer and all the different bowls, so I always choose cakes that I can make in one bowl with my wooden spoon and a little muscle.

If you have noticed a trend here, using olive oil in cakes instead of butter, you would be correct.
It is a healthier alternative to butter, and much easier to measure out the oil in a measuring cup than to cream butter with a paddle attachment on a mixer!

This olive oil cake is one of the best ones I have made so far. The original recipe comes from Group Recipes and is called "One Bowl Italian Apple Cake".

What's also nice about this recipe is that it uses only one mixing bowl, one wooden spoon and maybe a rubber spatula to spread the batter into the pan.

I have made it 3 times now, perfecting the recipe each time. Adding cloves the second time and vanilla the third, one time I only used one apple (because that is what I had, and it was still great). The last time I made it, I used raisins, because the date supply was depleted (from all the date nut breads I bake!).

My dad and husband said it was the best cake I have ever made.
That's a rave, so don't be afraid to try it.

The texture is very similar to a Jewish apple cake (which uses vegetable oil) and close to a cinnamon coffee cake.

It's best made the day before you are going to serve it (if you can wait that long!).

Topping: (optional)
1/2 cup of brown sugar mixed with a teaspoon of cinnamon, some chopped nuts and 2 tablespoons of butter, cut up into little pieces.

Combine all ingredients in a large mixing bowl and add in the apples and nuts last.
Sprinkle with sugar and cinnamon topping and dot with the butter pieces. 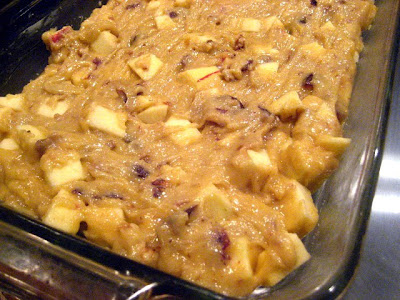 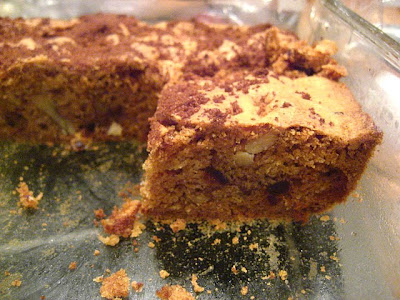 Jersey Girl Cooks said…
This looks great! I know what you mean about butter softening. I end up putting it in the microwave (usually for too long) then end up with a mess!
October 23, 2010 at 8:34 AM

Foodiewife said…
Hello. Defrost on the m/wave. Power turned to low. 20 second bursts = soft buttah! I happen to love butter, but oil in my cakes are right there as faves. Giada first introduced me to olive oil, and I love it. This is a perfect fall cake. Wait one day to eat it? Right. I'd have to make two. One for NOW and one for later. xoxo
October 23, 2010 at 11:03 AM

vanillasugarblog said…
oh how i hate waiting for the butter to come to room temp in the wintertime! most baking days i love one-bowl wonders.
October 23, 2010 at 2:12 PM

Carole said…
Applesauce is another alternative to using oil or butter in some cakes.
October 23, 2010 at 2:21 PM

PS-one stick of butter on 8 seconds in the microwave warms the butter nicely without melting.
October 23, 2010 at 2:51 PM

Unknown said…
I sure will try it. Anything simple using one bowl and a wooden spoon and not having to clean parts of a mixer. The ingredients are similar to a Green Tomato Bread I just made with leftover green tomatoes from the garden. I also added sliced dry apricots and nutmeg along with the cinnamon.
October 24, 2010 at 9:33 AM

Lisa said…
Yum, I love a good apple cake. I'm always impatient waiting for butter to soften too, so the use of olive oil in this recipe works for me.
October 24, 2010 at 11:11 PM

Steve said…
Stace,
Made this yesterday afternoon. Terrific. A big hit with everyone. It will make for a good breakfast too.
October 25, 2010 at 7:04 AM

Liliana said…
Sounds like my kind of cake - made in one bowl and delicious!