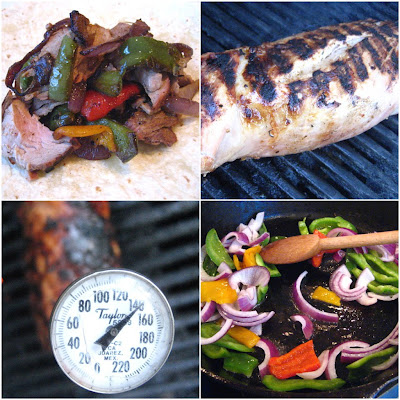 The only time I have had fajitas was as a teenager at TGI Fridays.

They were all the rage! Served in a sizzling cast iron skillet brought to your table!
It was so exciting.

It's pretty simple. It's really just cooked peppers and onions and some meat.
What's the attraction?

It must have been the toppings, like salsa, guacamole and sour cream that I couldn't wait to dish out.

I marinated the pork in a ziploc bag in the a.m., and when I came home from work, I just popped it on the sear setting on my new grill for 15 minutes and voila! Dinner was almost ready!

1 chipotle pepper from a can of chipotle peppers in adobo sauce (NOT the whole can!)
1 teaspoon of the adobo sauce from the can
1/2 cup orange juice
2 garlic cloves, minced
2 Tbsp red wine vinegar
juice of one lime
1 teaspoon cumin
kosher salt and pepper
dried oregano
1 lb. piece of pork tenderloin

In a ziploc bag, add all the ingredients and add the pork tenderloin to the bag.
Shake it up and let sit 4-8 hours in the fridge. 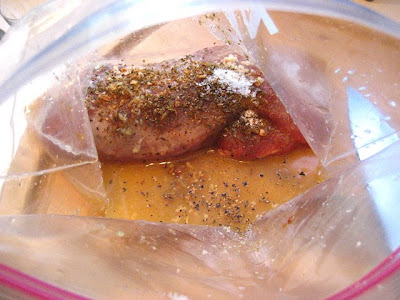 Light grill to high heat and cook the pork for 12-15 minutes.
Pork should be 145F. The temperature will rise when it is resting (important step).

Let pork rest on cutting board for 5 minutes before slicing for the fajitas.
Place the thinly sliced pork in a bowl and set aside.

Cook the sliced onions and peppers in a cast iron skillet in some canola oil, or you can grill them along side the pork. 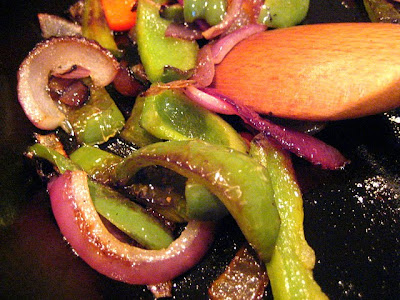 Add the pork to the cooked vegetables in the skillet and mix together off the heat.

Heat the tortillas (you can warm them in the oven or microwave) and spoon the pork and vegetable mixture into each round and fold.

Garnish with salsa, cilantro and sliced avocado if desired! 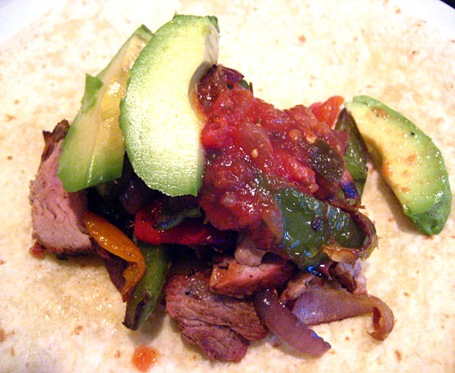 Ciao Chow Linda said…
You're making me want to run out and buy all the ingredients in this dish and make it for dinner. The marinade sounds great. What a great taste combo with the pork, avocado and chipotle flavors.
June 1, 2010 at 8:12 AM

Recipe for Delicious said…
I might have to change my plans for the pork tenderloin thawing in my fridge! That sounds easy and delicious!

Jen_from_NJ said…
I'm glad that you are enjoying that fabulous new grill! This sounds fantastic!
June 1, 2010 at 4:07 PM

Lisa from Delaware said…
Senorita Fajita - I'm glad that you've found more excitement in your life since watching the sizzle of your fajitas years ago! Andale andale!
'Leeeza'
June 1, 2010 at 9:45 PM

Proud Italian Cook said…
Ooooh, I love the marinade too! I'm sure I'll be making this for dinner sometime in the very near future, thank you Yoda for the inspiration!
June 2, 2010 at 9:22 AM