Last of the Rhubarb 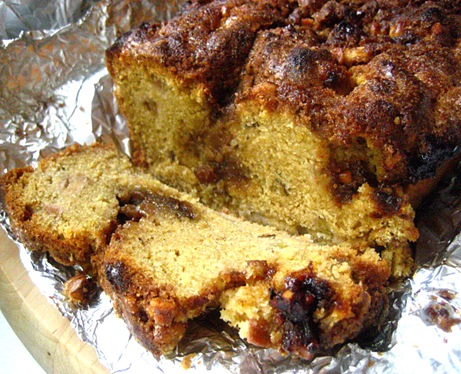 I can't help myself.

The Latino grocery store that I go to had huge stalks of rhubarb this week, and I couldn't help but buy it.

It's usually just a once a year thing in the spring, but when I saw Eileen's gorgeous rhubarb bread, I knew I had to find some red & green stalks before they all disappear till next year.

It's called a "bread", but it is more like a cake.
I took Eileen's suggestion and made one huge loaf in a big loaf pan, however, I think next time I would make 2 loaves in smaller pans (one for now, one for the freezer), because this thing was BIG!

If you can still score some rhubarb, trust me, this is worth making.
I served it with ginger ice cream on the side, and it was delicious.

*This cake is definitely best made 24 hours before serving so the flavors come together. 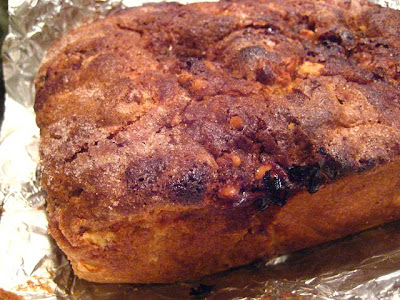 Topping: in a separate bowl combine

Grease two 9 x 5-inch loaf pans or one large one (cooking times will be different depending on the pans you use).

In a large bowl combine 1 1/2 cups of the brown sugar, the flour, salt, baking powder and baking soda.

Add milk mixture to the flour mixture and stir just until combined. Fold in the rhubarb and the walnuts. 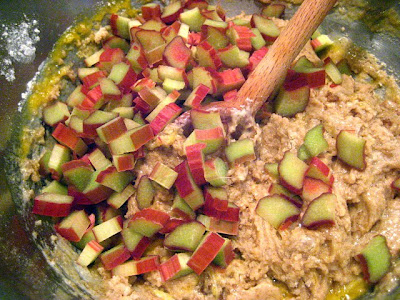 Pour batter into prepared loaf pan. (I used one large loaf pan lined with buttered foil for easy lift out!).

In small bowl, combine remaining 1/4 cup brown sugar, cinnamon and melted butter. Sprinkle mixture onto bread batter. Bake for approximately 40-45 minutes if making two loaves, approximately 55-60 minutes if making one loaf. Test with a wooden skewer for doneness. (Mine needed an hour in the large loaf pan, and 30 minutes in the pan to cool before removing).

This was best made the night before eating! 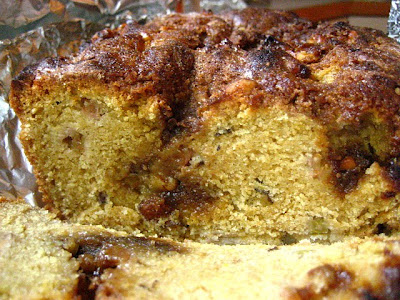 Carolyn said…
Hee hee, I did exactly the same thing when I saw that my local grocery store is finally carrying rhubarb. Bought a ton, will likely freeze a bunch to make yummy rhubarb things later on in the year.
June 19, 2010 at 7:29 AM

Iiiii said…
Nice recipe! Something else, I alway make Rhabarber Streuselkuchen, lovely, but boring after so meny years:)
June 19, 2010 at 10:36 AM

Foodiewife said…
The Queen of Tarts is turning into the Mistress of Loaf Quick Breads. First the Clementine cake, now this one. A cup of freshly brewed strong coffee would round this off perfectly. I must find rhubarb!
June 19, 2010 at 11:47 AM

Eileen said…
Nice bread, Stacey! I still have loads of rhubarb and should cut some this weekend and do something with it. I now have a little table oven, so I have no excuse not to bake.
June 19, 2010 at 1:23 PM

Recipe for Delicious said…
I just made something very similar to this! The rhubarb is still plentiful at my farmers' market.
June 19, 2010 at 4:19 PM

Lisa in Delaware said…
Hi, Stacey. We must be on the same wave-length. I saw Eileen's recipe on Friday and was determined to make it this week end. Armed with the recipe I went to the farmer's market in search of rhubarb but the Amish girls said the season was over! Boo hoo. On the way home I whirled in the driveway of a 200 y.o. farmette in the middle of our suburbia and found a pile of rhubarb for sale at their market. $3.99/lb. I scored enough for the recipe, which I plan to make today. I'll put the batter in my mini loaf pans so I can freeze little servings for breakfast and snacks -and to share with neighbors. hmmmm. Might have to go back and buy some more rhubarb to freeze! Lisa
June 20, 2010 at 8:46 AM