Spring Panzanella: It's all about the BREAD 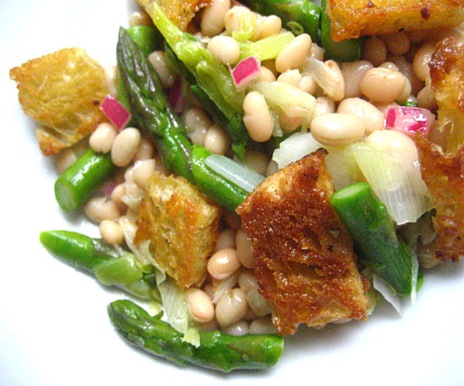 A summer panzanella salad is all about the end of summer, ripe tomatoes and basil, or is it?

Maybe it's really just a vehicle for these fantastic, garlicky croutons.

Instead of tomatoes, this version of panzanella salad highlights spring produce, leeks and asparagus.....and the croutons, of course.

WARNING: These croutons are scary, so make a double batch. You will wind up eating them right off the baking sheet, they are that good. 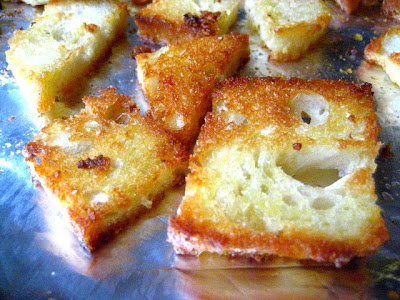 The addition of the white beans makes this a hearty spring dinner, not just a side salad. We ate this as a meal, and it was even better for lunch the next day.

In a large bowl, toss the bread cubes with the rest of the ingredients.
Lay on a baking sheet and bake at 400F for 15-20 minutes, turning them once or twice in between baking.

Make the dressing ahead and let it sit on the counter for a while, so the onion mellows in the vinegar.

Steam asparagus spears for 2 minutes, and shock in ice water to stop the cooking process. Slice into 1" pieces.

Wash leeks well by cutting them in half lengthwise and running them under cold water.
In a 12" skillet, cover leeks with water and add 2 tsp of salt. Simmer the leeks gently for 15 minutes.

The leeks will be slippery wet and hard to cut, so make sure you hold them tightly and use a very sharp knife, or they will slip (a bit of a pain and not the most practical way to slice leeks). Slice into 1" pieces.

Toss the asparagus pieces with the leeks and white beans. Add the dressing and toss all ingredients together gently.
Add the croutons and toss to combine. 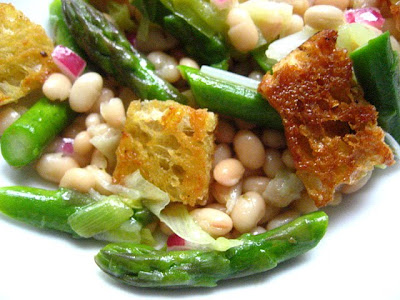 tasteofbeirut said…
Love the addition of white beans! This salad is perfect and right up my alley with a dressing after my own heart; when I made pan bagnat recently, reading up on food from Nice, I found out that the salade niçoise used to be like this panzanella, with croutons of country bread. Then it evolved into the pan bagnat.
May 26, 2010 at 7:20 AM

Ciao Chow Linda said…
I love this combination Stacey and I know those croutons are addictive. Even without them, the salad would be great for lunch or as a side dish.
May 26, 2010 at 9:40 AM

Natalie said…
I recently made a caprese panzanella and it's one of my favorite new meals. I can't wait to try this version!
May 26, 2010 at 1:33 PM

The Short (dis)Order Cook said…
Creative idea for panzanella. It's about time someone uses something other than tomatoes!
May 26, 2010 at 3:39 PM

Susan from Food Blogga said…
For me, a summer panzanella tastes good anytime. I'd like to pair mine with a couple of your polenta bouchees with fig balsamic jam, please.
May 26, 2010 at 9:34 PM

Sam Hoffer / My Carolina Kitchen said…
Stacey, I love the addition of spring vegetables and white beans in the Panzanella salad. They make it so fresh.