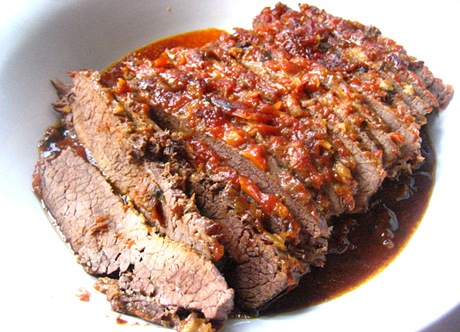 If you grew up Jewish, you are well acquainted with the brisket.

You eat it at every holiday meal; it's usually dry; made with ketchup and onions, some use soup mix, some don't. As a kid, I probably ate 100 lbs worth my share in brisket.

When I grew up, I decided I would never make a brisket again.

Southerners are also well versed in brisket 101, but they do it right, slow cooked and BBQ style.

So how can a rancher's wife from Oklahoma possibly teach a Jewish girl from New Jersey how to make a brisket?

Reading Ree Drummond's site, I saw she made a Passover brisket with ketchup and soup mix. Now what could Ree possibly know about making brisket that I didn't? Why did she think hers would be better than a Jewish grandmother's?

Since Passover and Easter fell during the same week this year, brisket was on sale (it always is on sale during the Jewish holidays) for half price. So, why not a brisket for Easter?

I would try it Ree's way. Slow cook it for hours and leave it alone and see if my angry feelings for it would go away. 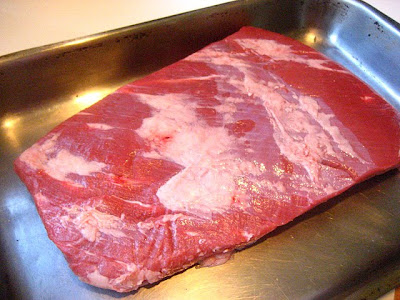 3 ingredients, not including the meat. That's it.

I slow cooked the meat covered with foil at a low temperature of 275F for 4 hours for a 3 lb. brisket (Ree recommends for a 5-7 lb. brisket, which is the usual size, cook for 6 hours plus).

5 lb. brisket (not a corned beef brisket, I noticed some of Ree's commenters did this by mistake!)
1 cup of Heinz ketchup
package of Lipton dry onion soup mix
a little water added to make it soupy

Make the ketchup soup mix sauce and spread it over the meat. I only did the top of the brisket. Marinate covered in the fridge overnight. 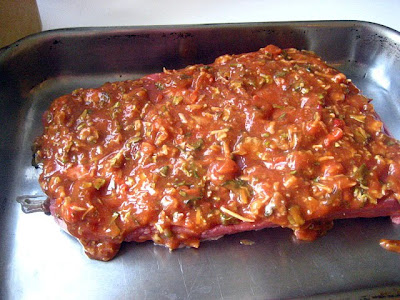 The house will smell so good, you will have the neighbors' dogs barking. No lie. 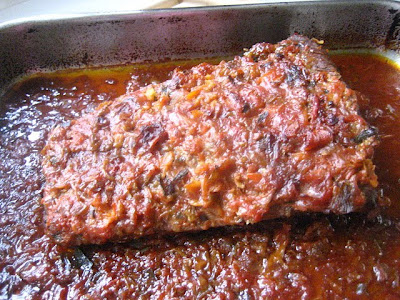 When you think it's time, test the meat by flaking with a fork for doneness.

Slice on a cutting board against the grain and lift with a heavy spatula and put back in the pan with the leftover sauce and serve! 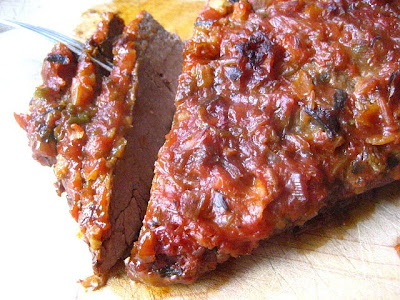 The difference between this recipe and my grandmother's is none, except for the slow cooking method, which made the best brisket we have ever tasted! 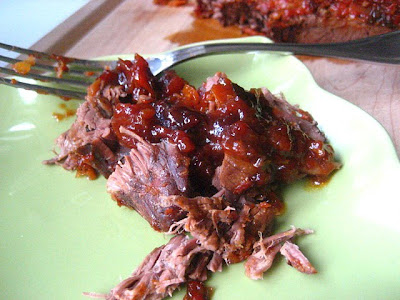 It's going to be even better today for lunch on Jewish rye with mustard!!! 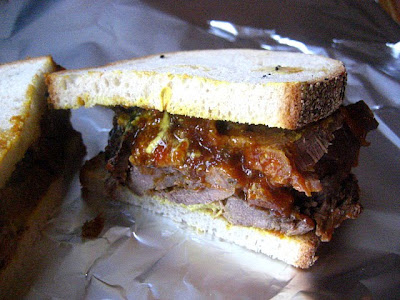 Thanks Pioneer Woman, you're a pretty smart lady.

Ciao Chow Linda said…
Can I come over today for one of those sandwiches? I saw that recipe on Pioneer Woman and thought it seemed odd with the ketchup, but the finished product looks scrumptious. The only time I ever cooked a brisket was with that onion soup mix.
April 6, 2010 at 9:17 AM

Tim said…
I just recently whipped up some rye bread (Artisan Bread in Five Minutes a Day) and this would be perfect with it!

I have always cooked brisket in my smoker for several hours so this will be a great alternative.

Anonymous said…
Une, Deux, Trois! Something so elegant about these 3 ingredient recipes. Funny thing to say about a Jewish holiday mainstay by way of Oklahoma, but there it is. That's a gorgeous hunk o' beef you snagged on sale, Stacey! For years I've been tearfully chopping up 10+ onions using my mother-in-law's method. Slow long cooking's magic. I'm going to try this as soon as my appetite's back...
April 6, 2010 at 10:18 AM

But not all Jewish brisket is gross. My mother's was the envy of every guest to our house. One of her tricks was using beer. And cooking it very slowly underneath some foil.
April 6, 2010 at 10:35 AM

Levinson-Axelrod said…
Nice tip from Dale.
Great recipe from Pioneer Woman as well. Thanks for sharing this.
April 6, 2010 at 11:41 AM

Proud Italian Cook said…
That's a nice looking brisket you got there, I especially like your sandwich!
April 6, 2010 at 4:19 PM

Jen_from_NJ said…
I love slow cooked meat that gets nice and crumbly! Your sandwich looks perfect. What a great combination - mustard, ketchup, and onions on that perfectly cooked brisket.
April 6, 2010 at 4:35 PM