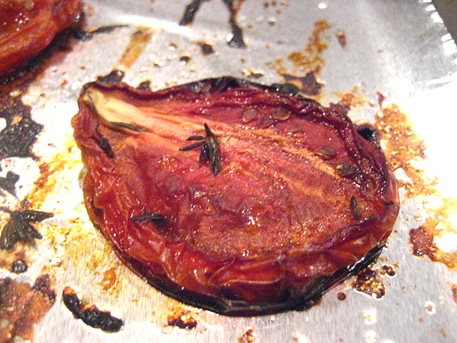 Since plum tomatoes (also known as Roma) are always cheap and always in season, roasting them just makes sense. Roasting brings out the sweetness in this otherwise boring variety of tomatoes.
I don't eat these tomatoes raw, they are best for sauces and cooking.

You can roast a whole bunch of them and have them for sandwiches, salads and even a tomato crostata (tomorrow's post!). They are delicious!

Years ago, I would oven dry them at a very low oven temperature of 200F for 10 hours.
But I found that I did not like the smell that was left in the kitchen after cooking them for that period of time, and I also don't like to go to sleep (or leave the house) with the oven on for such a long time period. (I don't leave the house with the dryer on either, I can tell you a nightmare story if you want).

So.....I now roast my tomatoes at a higher heat for less time! They stay plumper and are not as shriveled as oven dried tomatoes. I will call them Semi Oven Dried! 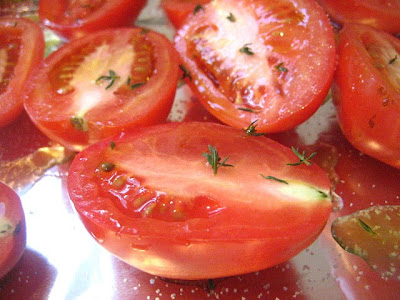 Cut your tomatoes in half and lay them on a baking sheet lined with aluminum foil, it makes cleanup much easier. 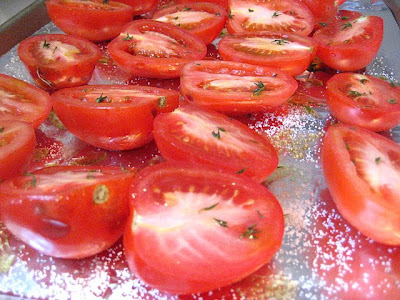 Leave in the oven for 3-4 hours, until they look to your liking. I turn the oven off and let them sit another hour or so. 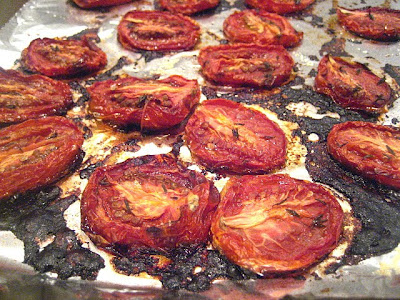 Store in a container in the fridge for up to a week.
You can drizzle a tiny bit of olive oil over them to keep them nice and shiny and moist.

Ed Schenk said…
Great technique. I never dreid them myself but have had friend who had good results.
March 9, 2010 at 10:09 AM

citronetvanille said…
Ah those are like "tomates confites", great way to get the natural sweet flavor of the tomatoes out and so good in so many dishes. Beautiful.
March 9, 2010 at 12:30 PM

Bob said…
Interesting method, definitely something I want to try. I bet they would be great for pizza or focaccia.
March 9, 2010 at 12:40 PM

The Food Hunter said…
I roasted a huge batch this past weekend. I always add a little bit of sugar to mine along with the salt.
March 9, 2010 at 1:16 PM

Proud Italian Cook said…
I'm with you on the fast way, and I'm the same way with my dryer, a neighbors home just 2 blocks away, burned down because of this.
March 9, 2010 at 5:00 PM

Claudia said…
I do this all the time - they are just grand. And I will change seasonings. And I will not leave the home with dryer going!
March 9, 2010 at 5:56 PM

Dana said…
Those look delicious. We really don't get good tomatoes here - even in the summer. I should really just make them this way for everything.
March 9, 2010 at 7:57 PM

Tim said…
I did this with little grape tomato halves that I will use for little pizzas tomorrow night. Thanks for the tip!
March 13, 2010 at 5:20 PM