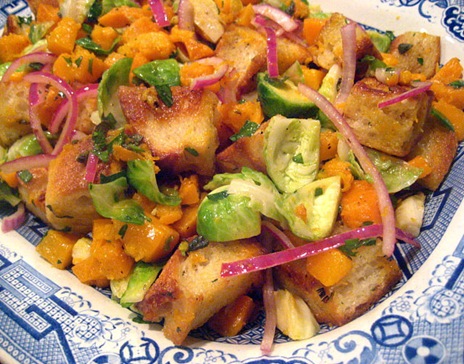 For me, a panzanella salad signifies summer......ripened Jersey tomatoes, crisp pieces of torn stale bread soaked in a vinaigrette and basil leaves. I look forward to it all year long.

Leafing thru Michael Chiarello's cookbook, he had an unusual salad that he calls a "Winter Panzanella".
It had butternut squash, red onions, Brussels sprouts and herb croutons.

Leave it to Michael Chiarello to pair these ingredients together.
There were a lot of steps involved in making this dish, but oh, so worth it.

This was beyond delicious. Probably one of the best salads I have ever had.
It is also very hearty and needed nothing to accompany it. 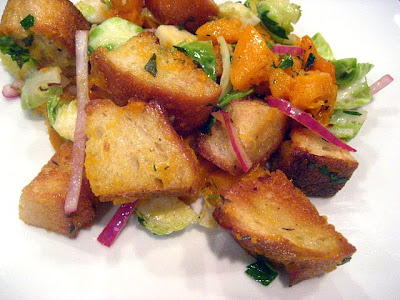 Winter Panzanella Salad: (adapted from Michael Chiarello's Casual Cooking)
*(I have asterisked where I have made an addition or omission to the recipe).

Melt the butter in a large skillet over moderate heat and cook until it foams. 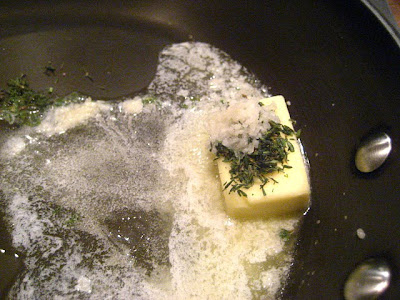 Add the garlic and thyme, and immediately add the bread cubes. Toss to coat well. Add most of the grated cheese and stir (I did not use the cheese, but I am sure it would be great).

Transfer bread to a baking sheet and sprinkle with the remaining cheese and salt and pepper and gently toss again while still warm to melt the cheese. Bake stirring once or twice, until the croutons are crisp and lightly colored on the outside but still soft within, about 10 to 15 minutes. Set aside and let cool. 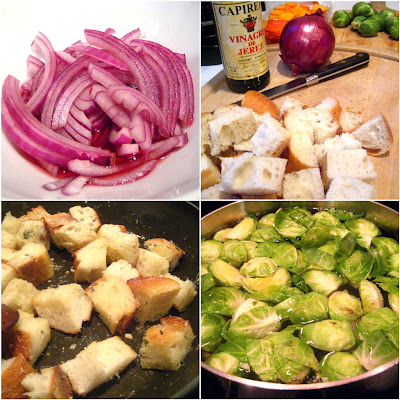 Soak the sliced onion in the sherry vinegar and a pinch of salt for about 15 minutes. Set aside.
Chiarello notes: "Soaking the onion briefly in sherry vinegar--sometimes called blooming the onion--mellows the raw onion taste." This really does work.

Toss the squash with 1 1/2 tablespoons of the olive oil, sage, salt, and pepper. Arrange in a single layer on a baking sheet and bake at 400F until the squash is tender and lightly caramelized, about 15-20 minutes. Let cool.

Bring a large pot of salted water to a boil. Add the quartered Brussels sprouts and cook until tender but retain a touch of crispness, about 1 1/2 minutes, and drain.

Into the reserved red onions and vinegar, whisk in remaining 1/2 cup olive oil. Season with pepper. 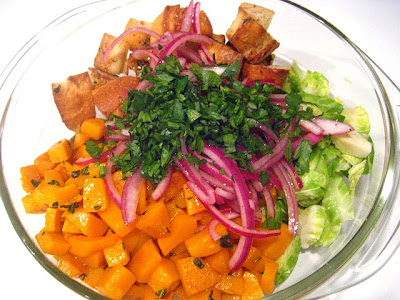 In a large bowl combine the roasted squash, croutons, and Brussels sprouts. Add the vinaigrette and toss. Add the parsley leaves and toss again. Taste and adjust the seasoning. Garnish with grated Parmesan, if desired, and serve immediately. 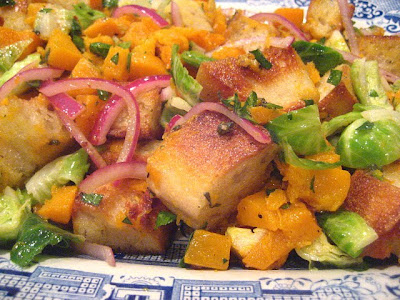 Proud Italian Cook said…
I'm intrigued! I love everything in it, what a great idea, perfect for now. It looks beyond delicious!
February 24, 2010 at 9:11 AM

Ciao Chow Linda said…
I am always impressed with Michael Chiarello's cooking and this is a good example.
February 24, 2010 at 9:28 AM

George Gaston said…
Stacey, I am a huge fan of Michael and love his ease & creativity in the kitchen. This sounds like an amazing panzanella salad.

I especially love all the different textures. Many thanks for sharing one of his creations...
February 24, 2010 at 11:16 AM

Meseidy said…
S-
This looks incredible! A great way to give a winter spin to a traditionally summer salad. This has intrigued me.
February 24, 2010 at 4:57 PM

Jen_from_NJ said…
Two of my favs - Brussels sprouts and butternut squash! I must try this winter panzanella salad!
February 25, 2010 at 4:35 PM

amycaseycooks said…
I love panzanella salad in the summer. But with the no-taste tomatoes of winter, it is a long wait for Jersey's summer tomatoes. What a great way to change up the salad to enjoy it now.
February 26, 2010 at 12:37 PM

Culinary Cory said…
I totally agree. Panzanella salad definitely signifies summer for me. I like the idea of using winter veggies to try to get a least a little taste of summer.
February 27, 2010 at 11:14 AM