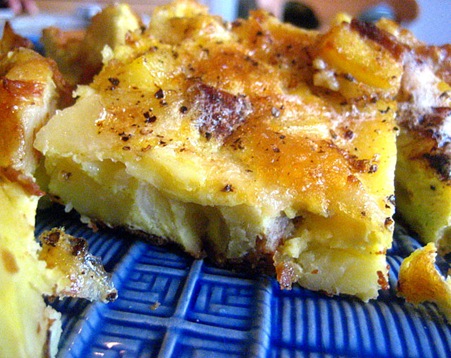 A tortilla is a simple Spanish omelet, usually served as part of tapas buffet or for lunch, cold on a sandwich. It is much like an Italian frittata, except you make a tortilla on the stove and with potatoes, as opposed to a frittata which is baked in the oven.

I think I will get better at it with practice.

Though the ingredients are simple, the process of cooking and flipping can be tricky.
Let it be known: you have been warned.

Make sure you have a flexible fish spatula, one that is thin and can slide underneath the tortilla to help lift it out. 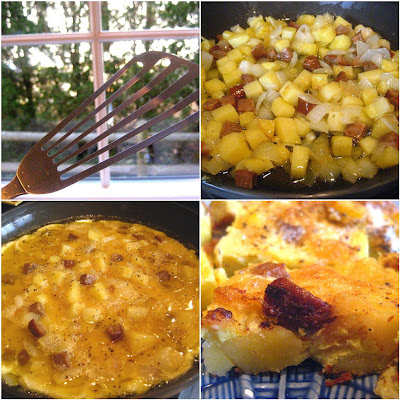 Another rule is stick to the 1/2 cup of oil in the recipe.
I thought it was a lot, but if you don't use that quantity, you will have nothing but a big stuck omelet.

I found this simple recipe on Angela's blog, and it came out beautifully, though I did panic when I was flipping it.

We loved this warm, and cold the next day in the lunchbox. 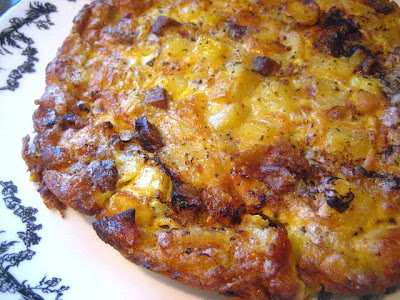 In an 8" heavy skillet, heat olive oil on medium and cook your potatoes and onions for about 12 minutes, covered.
Add the chorizo the last minute while the potatoes are cooking.

Remove the potatoes, onions and chorizo with a slotted spoon to a bowl and add the 6 beaten eggs to this mixture, salt and pepper.

You probably will need to add MORE oil to the skillet.
I promise this was not greasy.

Pour in the egg mixture and stir to combine and press to flatten. Cook, running a flexible spatula around the edges occasionally until the edges set and the center is slightly running, about 6 minutes on medium flame. 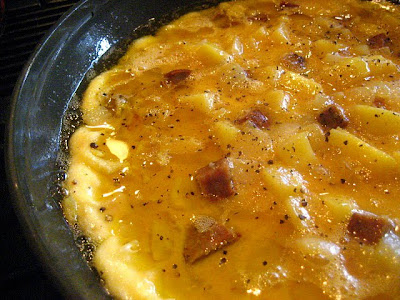 Place a plate, upside down, over the skillet, and invert the tortilla onto the plate (be careful about the hot oil that will drip out of the pan). Slide the tortilla back into the skillet and cook over low heat until it's completely set in the center, a few minutes longer. Slice and serve. 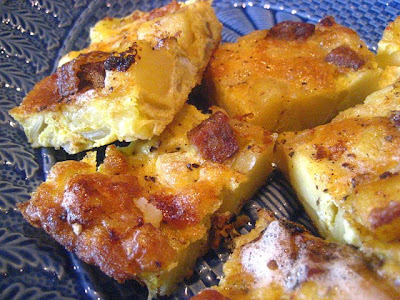 Content in a Cottage said…
The flipping part sounds very tricky. This dish looks delicious. Yum.
December 9, 2009 at 9:05 AM

kat said…
I fell in love with these when I was in Spain especially at room temp or cold. They are tricky to make or I'd be eating them everyday.
December 9, 2009 at 9:31 AM

Meseidy said…
I love tortillas. My mom use to make them as a quick dinner option. We would eat them with a side of rice and beans. Mmmmmm.
December 9, 2009 at 9:41 AM

Foodiewife said…
My Latin roots are definitely lusting for this. This is a perfect brunch item. Coming soon, to my blog, when I finally catch up in a couple of months. Great comfort food, Stace.
December 9, 2009 at 11:03 AM

Catherine said…
I tried making this a year ago and failed miserably. Yours looks absolutely perfect. I'm going to give it another go. Thanks Stacey!
December 9, 2009 at 11:05 AM

Ciao Chow Linda said…
I always enjoyed this dish. A Spanish friend of mine first introduced me to it and made it at our home more than 30 years ago. Yours looks great. Good flip work.
December 9, 2009 at 1:39 PM

Two Peas and Their Pod moved to WordPress, please update your readers, etc. Our address is: http://www.twopeasandtheirpod.com Come visit us and check out our new look! Thanks for following us!
December 9, 2009 at 2:35 PM

lisa is cooking said…
Looks delicious! The crispy, golden surface is making me hungry, but I'd be scared of the flipping.
December 9, 2009 at 3:53 PM

Dana said…
I lived on those (without the sausage) on our honeymoon in Spain. I only have a square non-stick pan so when I make them, they turn out square! Still delicious though!
December 9, 2009 at 6:24 PM

T.W. Barritt at Culinary Types said…
I love making tortillas - I've gotten quite good at them - even the flipping! Although, sometimes I tend to load up a little too much on the potatoes.
December 9, 2009 at 8:45 PM

Memória said…
I have been meaning to make a tortilla española (with an "ñ") for the longest time but have never gotten around to it. Your tortilla looks fantastic! I've seen youtube videos of Spaniards flipping over the tortillas by placing a plate on top of the pan first (before and after cooking the second side).
December 9, 2009 at 9:45 PM

Alexa said…
My mom use to make a potato omelet with caramelized onions when I was growing up. It was always a favorite. This looks very similar and equally delicious!
December 9, 2009 at 11:32 PM

Lori Lynn said…
When we traveled in Mexico, we used to take this tortilla wrapped in foil on our treks, for lunch. I haven't had one in years, thanks for the inspiration.
LL
December 10, 2009 at 3:27 PM

Angela said…
Hi Stacey -- Your tortilla is gorgeous! I'm so glad you liked the recipe. Flipping was definitely the hardest part. I've been eyeing tortilla pans at La Tienda (www.latienda.com) that would make flipping a cinch. They are two sautee pans clamped together with a hinge -- brilliant! Check them out. Thanks for linking to my blog! -- Angela
December 10, 2009 at 8:48 PM

Sam Hoffer / My Carolina Kitchen said…
I really like tortillas and fortunately I have a husband who loves to flip them. I look the other way when he flips but it, so far, has always worked.
And no, it's not Carl Edwards. With his famous back-flips, I bet he could flip a tortilla too.
Sam
December 11, 2009 at 9:11 AM