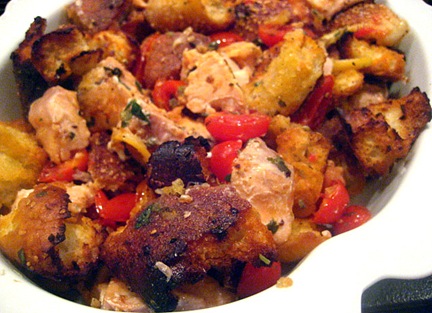 This was a weird sounding recipe from the October issue of Food & Wine, but it turned out to be a good combination of flavors and easy enough to make on a weeknight.

I found the recipe needed more oil than the 5 tablespoons it called for.
You be the judge, and I also think the salmon needed to roast a bit longer than 6 minutes. It's a simple enough recipe to play around with.

I also liked that this was a one pan dish. I never use disposable aluminum pans (like my mother did my whole life), but I had one laying around so decided to be a trailblazer and use it then throw it out!

It was really good! Don't be scared!

In a large roasting pan, toss the bread chunks w/ some olive oil. Roast about 5 minutes until bread is lightly toasted. 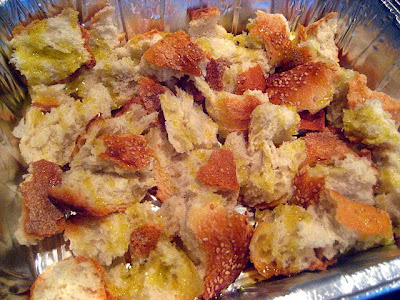 In a large bowl, toss the tomatoes with the garlic, capers, lemon slices, parsley, crushed red peppers and 2 tablespoons (or more) of olive oil; season w/ salt and pepper. Stir the tomatoes into the toasted bread. Roast 10-12 minutes until the tomatoes begin to soften and break down. 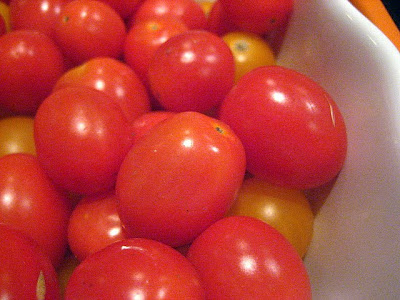 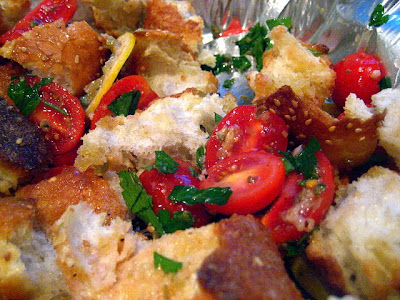 Meanwhile, in the same bowl, toss the salmon with the remaining olive oil and season with kosher salt and pepper. Nestle the salmon chunks into the bread and tomatoes, spooning some of the tomatoes on top. Roast about 6 minutes (mine took longer) until the salmon is cooked thru. 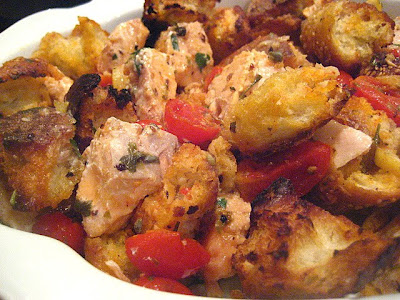 The JR said…
Very good looking. Fish is something we need to eat more of. Love the recipe.

chilipepper said…
This looks like a dish you could kick back and eat with a big spoon. I bet it tastes great and has an earthy, nubbly look to it that pleases me. Bring it on!
October 2, 2009 at 7:58 AM

Bill Medifast said…
Roasted salmon is one of my favorites. I don't care what time of year it is, I'm going to eat it!

This is a delicious recipe idea. Going to have to try it out.

Thanks for sharing this Stacey,

Dining Table Sets Gal said…
I love different foods, but this one is unique. I'ts my first to see this kind of food and I want to try this at home. We own a Dining Table ecommerce site and are always looking for great content to help inspire. Thanks.
October 19, 2010 at 2:54 AM

Granite Dining Tables said…
I always love eating different kinds of food as long as it is healthy to eat. I love tomatoes also. I always prepare food for dinner every night.
May 15, 2011 at 1:54 AM