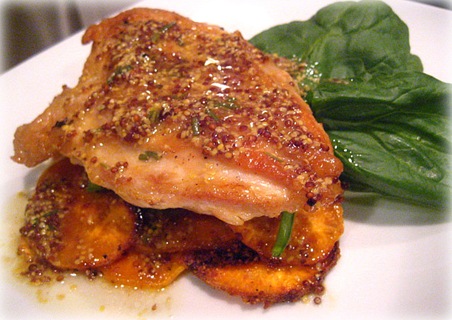 How come I didn't know about Donna Hay?

It was not until recently when I was browsing at cookbook junkie, Lisa, from Lisa is Cooking that she mentioned how much she loved Donna Hay and her magazine.

From what I know now, Ms. Hay is like the Barefoot Contessa of Australia!
I guess I am not as current as I thought I was.

A subscription to her magazine for 6 months is $92. US, only because it is being mailed from Australia.

I picked up a single issue up at Barnes & Noble, and there were some terrific recipes in the issue, as well as beautiful photos. 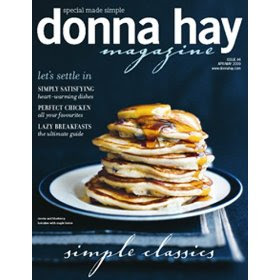 The measurements are all in metric conversion, so I had to figure out how many potatoes 400g equaled.

That is why I have google.

This was a TERRIFIC weeknight dinner with tons of flavor and pretty to look at.
It took about an hour for the whole dinner to come together and it was under $10. for the 2 of us.

Donna Hay has a new fan. 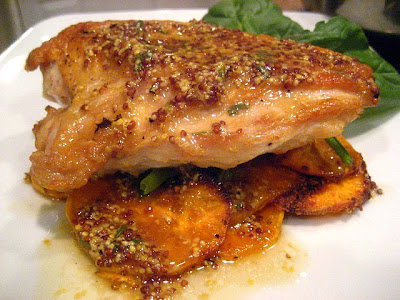 Place the sweet potato slices, half the parmesan, oil, salt and pepper in a bowl and toss until well combined. Layer the sweet potato on a baking tray lined with non-stick baking paper or a Silpat, sprinkle over the remaining parmesan and bake in the oven for 25 minutes or until golden. 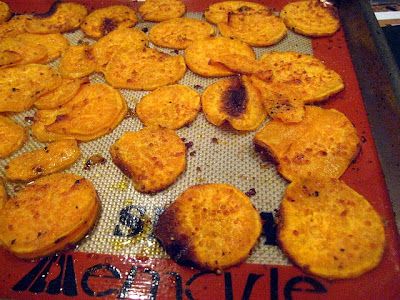 Heat a large skillet over high heat. Add the extra tbsp of oil and add the chicken and cook for 3 minutes each side, starting with skin side down. Place on a baking tray and finish cooking in the oven for 10-15 minutes or until cooked through. 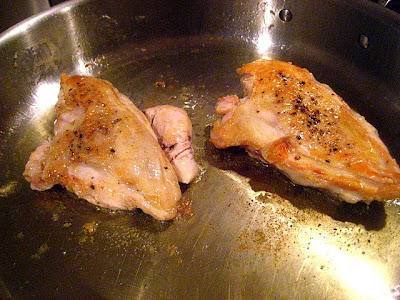 Add the stock, rosemary, mustard, salt and pepper to the skillet and cook for 2 minutes, scraping up the brown bits and reducing the stock.

To serve, lay your sweet potatoes on plates, and top with the spinach and chicken and spoon over the warm rosemary sauce. Serves 4. 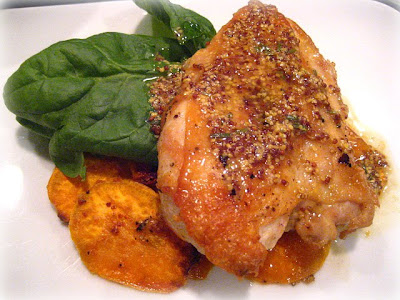 Ciao Chow Linda said…
I never heard of Donna Hay either. I guess I don't get to Australia often enough. The chicken does look mighty tasty though. I like those sweet potatoes. I did something similar with red potatoes just two nights ago and they turned out great - almost like potato chips.
October 23, 2009 at 9:04 AM

lisa is cooking said…
Hooray for a new fan of Hay! That's true, her magazine has metric weights. Her books sold in the US have conversions though. Your chicken looks great! I'll have to look for that latest issue today.
October 23, 2009 at 9:25 AM

RecipeGirl said…
That does look pretty delicious! I have heard of her but have never looked at her magazine or any of her cookbooks. I'm thinking I should pick up a magazine w/ a good cover for my new blog!
October 23, 2009 at 9:57 AM

SarahB said…
I didn't know about the magazine but I do have one of her cookbooks. Great pictures. I browse the recipes all the time but still have yet to make one!
October 23, 2009 at 10:00 AM

The JR said…
That does look amazing. I'm so glad you posted the converted version.

The mustard pan sauce has my glands watering.

The Food Hunter said…
I've heard of her but only just recently seen a copy of the magazine. A little to expensive for my budget but it did have some interesting recipes and nice photos.
October 23, 2009 at 12:58 PM

Melbourne Girl said…
Stacey, I'm in Australia and have a subscription to her magazine. Donna was originally a food stylist and progressed to cooking. She has some wonderful support staff who really know their stuff...and she's just recently opened a little shop and you can also but her things on-line. She's started selling some of her own kitchen items in a similar way to Nigella Lawson. It's a gorgeous mag and always has lots of great ideas. If you get the chance, look for her Christmas issue. It always has some lovely ideas for table settings etc as well.

Pity the subscription is so pricey for the US

Proud Italian Cook said…
Everytime I'm at Borders I always pick up her magazine and browse through it. Her photo's are always so gorgeous and her recipes always look so good. Just like this! Guess what were having for dinner tonight? Your shrimp cakes. My little cakes are made, sitting in the frig, ready for me to cook up. You know I'll be trying this chicken.
October 23, 2009 at 5:17 PM

Christo Gonzales said…
Hey, Hay - I make something similar! Mashed sweet potato with an orange rosemary glaze on the roast chicken - learned it from a peruvian restaurant. Looks good.
October 23, 2009 at 5:19 PM

Lori Lynn said…
That chicken recipe sounds great. I heard of her from other bloggers and their Hey Hey It's Donna Day events. Love her photography, so fresh looking!
LL
October 23, 2009 at 5:30 PM

Amie said…
Wow - this looks amazing and sounds very tasty, those flavors are right up my alley. I may have to rethink my dinner plan for tomorrow.
October 23, 2009 at 10:36 PM

Catherine said…
I always pick up her magazine at Whole Foods. I can't get over the simplicity beauty of her photos. So light and crisp. And the food is delicious too.

Surprisingly her books are reasonably priced and equally as beautiful.
October 24, 2009 at 5:33 PM

Nicole @ Sprinkle with Salt said…
Love Donna Hay! and this recipe looks delicious. Thanks for sharing!
October 26, 2009 at 3:46 PM

Anderburf said…
This looks really good! I just got some organic pepper and Himalayan sea salt from Sustainable Sourcing https://secure.sustainablesourcing.com and I think I'll try them both out in this recipe. Thanks for sharing!
October 29, 2009 at 9:11 PM